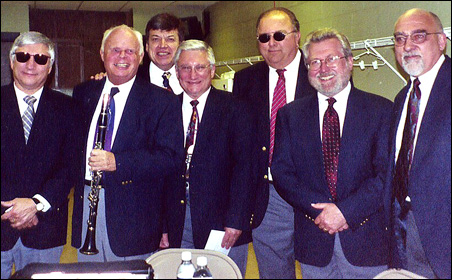 The group has played together for 36 years. Not often, sometimes just once a year. But they had a following and produced some fine Dixieland jazz.

The players have gotten older and busier, and decided to go out on a high note, so to speak. They’ll play their swan song at 8 p.m. in the Old Log Theater in Excelsior.

Here’s how clarinet player Dick Ramberg describes the group’s beginnings in an email (with a little borrowing from liner notes used on the group’s CDs):

“On a sub-zero night in January 1972, Dick Ramberg was visiting with longtime friends, Steve and Diane Sorenson. The conversation naturally turned to plans for the summer. Steve said: ‘Why don’t we get a Dixieland Band, a good one, and charter the Jonathan Padelford for a cruise on the Mississippi River in St Paul; it would be more fun than hiring a hall.’

“They invited their friends and Dick asked five wonderful jazz musicians with whom he had played individually, but never as a unit. On Sunday, July 23, 1972, their winter dreams became reality! The band clicked from note one. The evening was so exciting that several people said, ‘You should record.’ Two months later they met at the Sound 80 Studio in Minneapolis and the Upper Mississippi Jazz Band was born.

“A year later, the group recorded its second album. The boat cruises became an annual tradition for seven years. A variety of concerts, including a sell-out performance at the Old Log Theater in Excelsior, MN on January 6, 1974, led to a long term relationship with the St. Croix Valley Arts Guild in Hudson, WI. For the past 25 years, the Phipps Center for the Arts has hosted annual concerts by the UMJB. Over the years, individual band members have pursued a variety of careers, some in business and government and some as full-time musicians. They have gathered every spring at the Phipps to renew their personal camaraderie and make their special music together.”