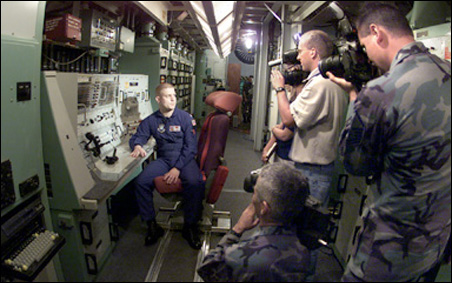 Courtesy of the Grand Forks Herald/Photo by Jackie Lorentz
Capt. Rich Nameth describes the operation of Oscar-Zero, the final missile launch control facility of the Minuteman III deterrent system in northeast North Dakota. The site has been inactive since 1997.

COOPERSTOWN, N.D. — It’s been 10 years since the last of “our” missiles left the underground silos scattered among the wheat and sunflower fields of eastern North Dakota.

They left ever so quietly, one by one, stripped of their nuclear warheads and headed not in long, angry arcs toward Moscow or Prague but aboard long trucks and bound for storage or redeployment in another place.

Like the Cold War itself, the eastern Dakota missile field is now history, and the state is making it official: preserving one Minuteman III missile silo and one launch command center, like chunks of the Berlin Wall, as historical sites.

Come see the artwork scrawled on the walls of launch centers by young Air Force officers who were trained to turn keys and destroy cities, if ordered. Some missileers philosophized or painted murals inside their command bunkers.

Before launch center Hotel-Zero was demolished, a menu posted in the mess recorded a last crew supper: a choice of country-fried steak, fried fish and pasta primavera.

We reacted more viscerally than others, perhaps, when we saw “movie Minutemen” fly from Kansas silos in the 1983 film “The Day After,” because we always wondered what it would look and sound and feel like if we ever saw one of our missiles leave in a hurry. Watching the film, we knowingly counted the minutes until Lawrence, Kan., disappeared under a retaliatory Soviet mushroom cloud.

For better than three decades, on every two-hour drive from Valley City, my hometown, to Grand Forks, where I went to school and later worked at the newspaper, I passed by several missile sites. And on the route out west, along U.S. Highway 2, they were mileposts outside Lakota and Michigan, N.D., and other small towns, a patch of gravel enclosed within heavy metal fence topped by barbed wire, with motion detectors and signs warning that “deadly force” was authorized against intruders.

The intruders usually were deer or rabbits, or occasionally a farmer who swung a plow too close or innocently walked out in the evening to inspect “his” missile.

“Once there were some little kids, fleeing a domestic thing, and the kids came up to the gate” and triggered an alarm, said Joe Conzo, 65, who retired in 1987 as an Air Force master sergeant after working at launch control centers.

On another occasion, members of a peace group poured blood at a missile silo and tried to climb the fence, Conzo said.

The 150 silos and the 15 missile alert stations that controlled them were installed on leased farmland starting in 1964. They were deactivated in the late 1990s under terms of strategic arms treaties between the United States and Russia, and all but these two designated museum pieces have been dismantled.

“They did their job,” Col. Robert Summers, commander from July 1995 to July 1996 of the 321st Missile Group stationed at Grand Forks Air Force Base, said at the time of the deactivation.

On the 3-foot-thick steel door of one launch control chamber, 45 feet below ground, members of the last Air Force crew posted their own epilogue: “Last alert, 17 July 1997. In Aquilae Cura.”

The Latin phrase translates, “In the care of eagles.”

Restoration to be done by next year
The Historical Society of North Dakota acquired control of center Oscar-Zero, four miles north of Cooperstown, and missile silo November-33, two miles east of town. With $500,000 from the state and a federal grant, plus proceeds from a public fund drive, the society plans to restore them by next year to duty status — except, of course, for the nuclear-tipped Minuteman missiles.

“We grew up with these missiles in our backyards,” said Merlan Paaverud, director of the State Historical Society. “We watched the trucks go by, and the helicopters and armored vehicles, and now we know: This could have been the end of the world.”

But it wasn’t, he said. And to help tell the story, Paaverud and others have collected artwork that was done at the sites by young airmen “to try to keep sane,” and they have recorded “the personal stories of some who sat and waited and went through tense situations that could have meant the end.”

I came back to the missile field twice during the deactivation, meaning to explain what was happening here to Twin Cities readers. In June 1996, I described the standing down and removal of Charlie-26, a 60-foot, 70,000-pound, $7 million missile with a range of 6,000 miles and a top speed at burnout of 16,000 miles an hour.

Staff Sgt. Kenny Corzete of Chillicothe, Mo., helped remove it from its silo.

“You handle it just like you would a baby,” he told me.

I returned in August 2001 to watch the imploding of missile site Hotel-29 just outside of Lakota, one of the last to go. I kept a jagged piece of rebar that came out of the ground. I’m still not entirely sure why.

Conzo’s duty in 1979 was to check his site’s equipment and water and fuel supplies, cut the grass or remove the snow “and do whatever needed to be done.”

Two officers were wired to 10 missiles
He and a cook and a half-dozen security police had a pool table, TV, checkers and other board games, and other distractions for down time. Deep below, the two young officers with their doomsday keys and codes were wired to 10 missiles, each potentially carrying three independently targeted warheads far more powerful than the atomic bomb that destroyed Hiroshima.

“Downstairs, it was noisy, hot and confined,” Conzo said. “I don’t know how they handled it. All they had was a radio and magazines. They didn’t have TV until ’85. They had messages coming in all the time, and they were always doing their training. They kept busy.”

“It was just a job to me,” he said, “except for one time. Something had happened during the night, and the following morning I was talking with the launch crew and they were still a little nervous.

It was “a misunderstanding or something,” Conzo said. “They never explained further, and I wasn’t supposed to know exactly what it was. But something like that makes you realize you’re involved with something serious.”

From New York originally, Conzo served in Vietnam before coming to the Grand Forks base in 1969. He married a woman from Finley, N.D., and stayed in Grand Forks when he retired in 1987.

“Every magazine on the shelf now was there the day we walked away,” he said. “All the furniture is there, the pool table and the exercise bike, all the kitchen utensils, and lots of Western novels — lots of Louis L’Amour. It looks just like when I worked there.”

The launch control center is surrounded by an open field, “a lot of weeds and grass,” Conzo said. “It hasn’t changed a single bit. No trees.

“I don’t think most people even realized the sites were there, or what they did,” he said.

“If we hadn’t had this and deterred war and everything else, you might not be in a position to ask any questions about it.

“It’s a good part of history, and you can go out and see it.”

Satellite shoot-’em-up has skeptics up in arms
By Sharon Schmickle
Tuesday, Feb. 19, 2008

Their nuclear missiles long gone, North Dakota silo and command center will come back to life