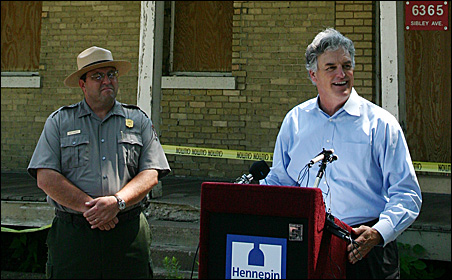 “These buildings can be saved,” said Hennepin County Commissioner Peter McLaughlin, as he described the  “incredible stabilizing efforts” that the county and the Minnesota Department of Natural Resources (DNR), which controls the Upper Post, have made over the last two years.

“You can go over to Officers’ Row” — the 10 Victorian homes that are the heart of the Upper Post —  “and see the work,” he said. Their roofs have been repaired or replaced and the buildings stabilized and mothballed.

“You can also see what happens when you DON”T do the work,” McLaughlin said, indicating  what was left of a red-roofed, yellow-brick building that lay in ruins in the background.

The Upper Post is not the same as historic Fort Snelling, which dates from the 1820s and is now a  popular living-history museum maintained by the Minnesota Historical Society.

28 decrepit buildings
This is the rest of the fort — the part of the old military base that visitors seldom see.

It was built after the Civil War and was in federal control — first by the military through World War II, then by the Veterans Administration —  until the early 1970s, when it was turned over to the state of Minnesota, to be administered by the Department of Natural Resources (DNR). Most of it has been vacant for 35 years. 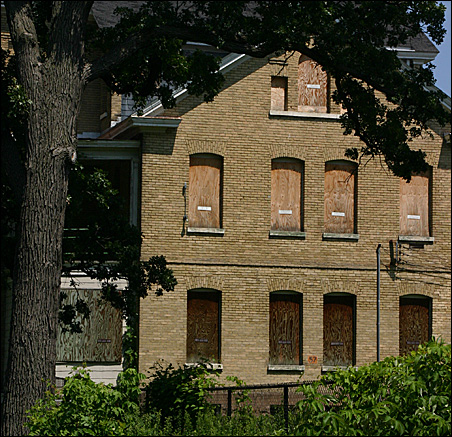 MinnPost photo by Catherine Watson
The Band Barracks, one of 28 historic structures to be salvaged and reused.

Today the Upper Post consists of 28 decrepit buildings on 141 acres of prime real estate atop a bluff that stretches along the Minnesota River, from the Mendota Bridge toward the airport.

The process is far from over and may end up costing $80 million or more, spokespersons for these groups said.

But the stabilization — done by prison inmates under county supervision  —  has “bought us 10 years,” a DNR representative said. Hopefully, he and others said, that should allow historically compatible development to come in and restore a Minnesota treasure.

‘These buildings can be saved’