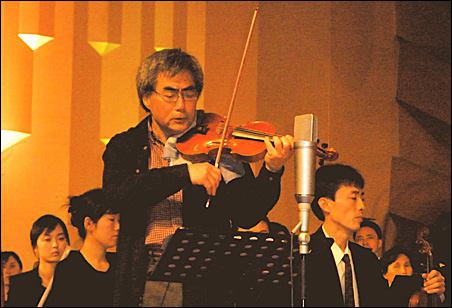 Now, though, the doors to that Communist nation seem to have opened at least a crack after President Bush removed it from the list of countries that sponsor terrorism last week and Pyongyang very publicly destroyed the cooling tower at its nuclear weapons plant.

Even before those diplomatic developments, Young-Nam Kim saw subtle signs that the North Korean people may be more open than many Westerners thought despite the historic standoff between their government and the United States.

Kim, an acclaimed violinist, is a University of Minnesota music professor and the founder and artistic director of the Chamber Music Society of Minnesota.

The New York Philharmonic Orchestra made a great news splash by performing in North Korea in February. But Kim arrived with little fanfare in April for 10 days of working with musicians and playing with the PyongYang National University Symphony Orchestra.

Skeptical about politics
This week, Kim said, “a warming relationship of any kind is welcome news.”

But he is skeptical that the latest political developments represent a major breakthrough.

“I, like many, think this is an attempt by the Bush administration to leave some positive mark on its foreign policy at the last minute,” he said.

More significant, Kim said, are recent cultural exchanges that have allowed North Koreans and Westerners to explore their differences and similarities.

“Exchange is a powerful conductor to bring people together,” he said.

Like so many others living in the West, Kim had seen the drab and dreary images of life in North Korea. He saw different pictures in Pyongyang:  friendly people who were curious about American politics and flower-bedecked boulevards where beautiful young women directed traffic.

But life in Pyongyang’s tourist areas is far different from the countryside, where peasants have suffered famine and repression. Kim did not travel around the country. Thus, he declined to draw sweeping conclusions about life in modern-day North Korea. 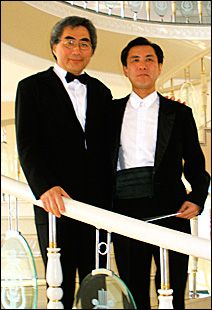 Courtesy of Young-Nam Kim
Young-Nam Kim, left, with conductor Mun-Ho Choi in the lobby of the Main Concert Hall in PyongYang.

Further, there is a special reason North Koreans were so friendly to him. Kim, 62, was born there in a small town north of the capital. His family left for the south when he was a small boy. And he moved to the United States when he was 17 years old, eventually settling in St. Paul, where he and his wife have three children.

This year’s trip was arranged by a group of Koreans who promote cultural exchange and meetings between divided Korean families. It was Kim’s second visit to his homeland; the first was in 2004 with an American arts group performing at a spring festival.

East-West music
Kim’s conclusions about modern-day North Korea are based on his area of expertise: music. From that perspective, the isolated nation is more culturally worldly than many outsiders might expect.

Under Japanese occupation in the early 20th century, Western music flooded all of Korea. Later, the Soviet Union provided a bridge to the great music of the West. North Korean musicians traveled and studied in Russia, Poland, East Germany and other countries with strong Western traditions.

That is not to say that North Korea does not have its own cherished traditions. Kim was startled and impressed with the intensity and pride musicians there poured into their country’s music.

One concerto, for example, is based on a song North Korea’s founding leader Kim Il-sung wrote when he fought the Japanese in the 1930s. The structure of the revered revolutionary anthem follows the exact format of a western concerto, Kim said. Harmonically, though, it is more North Korean, which Kim found to be “a bit naïve . . . like popular music here – flashy, but not so profound.”

An eye-opener
His cultural lesson began with the passion musicians poured into their performance of the piece.

“It was just amazing because they had such reverence for this piece,” he said. “It was a real eye opener for me.”

The North Koreans insisted to Kim that their own music is as good as Western music – even that performed by the great New York Philharmonic.

Respect for that national pride was an important step toward cultural understanding and communication.

In a sense, music provides a metaphor for North Korea today.

“They approach everything with enormous devotion and passion,” Kim said.

It also could provide a bridge.

“Music can evoke certain emotions in people which are common and which cross cultural boundaries,” he said. “If you hear somebody play passionately, you are moved by that with a kind of energy that brings people together. We share the same emotions, angst and sadness. It sounds like a cliché, but it is a common language.”

In that spirit, Kim places more hope in musical exchange than in political gestures.

“There is talk about bringing the North Korean National Symphony to Washington, D.C., sometime soon,” he said. “This is very welcome news, and I hope it will be more than just a political pawn.”