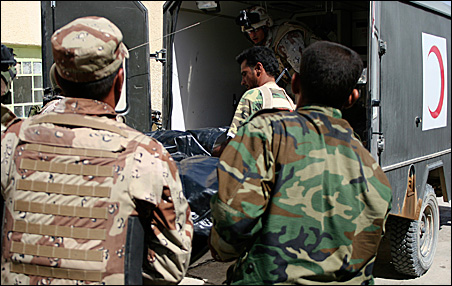 On June 26, freelance photographer Zoriah Miller, embedded with U.S. Marines in Anbar Province in Iraq, found himself an eyewitness to a suicide attack in which 20 people, including three Marines, were killed.

He described the scene as “horrific beyond words.” “I found it nearly impossible to look through the viewfinder.  What I saw was abhorrently graphic, yet far too important for the world to ignore.  I present images that provide an uncensored view of a terrible event, and some small measure of dignity to those who lost their lives.”

He published the pictures, including those of the dead Marines, on his web site and has found himself at the center of a major controversy over press freedom vs. military prerogatives, the political dangers of being embedded with a military unit and the importance of video and photographic coverage of war, particularly one that is unpopular.

Miller’s story popped around the Internet for a couple of weeks before the New York Times ran a major piece last weekend. (“Democracy Now” did an extensive interview with Miller, who has left Iraq. You can see it here.)

Marines responded
Michael Kamber, a photographer, and reporter Tim Arango write in the Times that as a result of publishing the photos of the dead Marines, Miller was forbidden to shoot photographs in Marine-controlled areas and that the Marine commander, Maj. Gen. John Kelly, is trying to have Miller banned from other military facilities around the world. The Times continues:

“If the conflict in Vietnam was notable for open access given to journalists — too much, many critics said, as the war played out nightly in bloody newscasts — the Iraq war may mark an opposite extreme: after five years and more than 4,000 American combat deaths, searches and interviews turned up fewer than a half-dozen graphic photographs of dead American soldiers. It is a complex issue, with competing claims often difficult to weigh in an age of instant communication around the globe via the Internet, in which such images can add to the immediate grief of families and the anger of comrades still in the field.

“While the Bush administration faced criticism for overt political manipulation in not permitting photos of flag-draped coffins, the issue is more emotional on the battlefield: local military commanders worry about security in publishing images of the American dead as well as an affront to the dignity of fallen comrades. Most newspapers refuse to publish such pictures as a matter of policy.  But opponents of the war, civil liberties advocates and journalists argue that the public portrayal of the war is being sanitized and that Americans who choose to do so have the right to see — in whatever medium — the human cost of a war that polls consistently show is unpopular with Americans.”
Robert Fox, writing in The Guardian, explains the dilemma with embedding:

“The case has brought into sharp focus the whole business of accrediting war correspondents and embedding journalists with operational units. His (Miller’s) transgression — for no one could be daft enough to call this a crime — was that he showed images of dead Americans killed in the service of their country. Though more than 4,000 American service personnel have been killed in Iraq, there have been surprisingly few photos of the dead, and the flag-draped coffins have often been kept away from the public gaze in hangars on air bases.  Despite the pervasive nature of images of war and the ease with which they can be transmitted, our authorities are squeamish about showing that war kills. Dead foreigners are one thing, but showing the images of dead British, American or French allied soldiers are off limits on the grounds that they are an unwarranted intrusion on grief for the relatives, dismay the community at home, and encourage the enemy.”

A different view
The Marine Corps has a different take on what happened, according to the Times.

“The Marine Corps denied it was trying to place limits on the news media and said Mr. Miller broke embed regulations. Security is the issue, officials said.

” ‘Specifically, Mr. Miller provided our enemy with an after-action report on the effectiveness of their attack and on the response procedures of U.S. and Iraqi forces,’ ” said Lt. Col. Chris Hughes, a Marine spokesman.

“News organizations say that such restrictions are one factor in declining coverage of the war, along with the danger, the high cost to financially ailing media outlets and diminished interest among Americans in following the war. By a recent count, only half a dozen Western photographers were covering a war in which 150,000 American troops are engaged.”

The public reaction has not always been pro-media. Aamer Madhani wrote in a Chicago Tribune blog that “The Times’ piece … notes that publishing photos of dead Americans is not prohibited under U.S. military. And any military public affairs officer will tell a journalist that they are not in the censorship business. But the reality is that the publishing of controversial photos has resulted in photographers being expelled from the frontlines. The questions remain: Are we getting a sanitized picture of the war? And are publishing images of wounded and dead American troops — even when their identities are not discernable — disrespectful?”

And another wrote: “All embeds should be barred from the front lines. They are not on the side of the USA. God only knows why they want to do harm. Reporters have been given too much leeway and they have not served us, the US, well at all. What happened to good old loyalty to the Marines and the country?”

Leola Johnson, a professor in the Humanities and Media and Cultural Studies Department at Macalester College told MinnPost that “the common wisdom among academics who study media representations of Iraq is that the embed program has always been a way to avoid another ‘television war’ a la Vietnam.  It has done this by putting journalists, and especially photographers, in reporting situations that favor ‘heroic’ narratives about the military. Embedded journalists were supposed to ‘get to know’ the soldiers personally, which would skew their work toward human-interest stories.

“Embedding has never enabled investigative or even spot news reporting of the sort that would have produced images of dead bodies in suicide bombings or images of torture victims. These kinds of images, along with images of caskets (think about the body bag images from Vietnam), tend to undermine heroic narratives of the war, replacing them with either oppressor or victimhood stories, and thereby undermining domestic support for the war. This would explain what is happening to Miller.  If he had just stuck with the human-interest template, he would have been OK.”

Kevin Sauter, a professor in the Communication & Journalism Department at the University of St. Thomas, said, “I have some sympathy for the position of the military that has allowed the embedding to take place and then doesn’t have the story they want told. But I’m a freedom-of-the-press guy and we have to have these photographers over there. They can’t just deny people access to this stuff.”

A photographer’s concern
Sometimes, the impact of photo images from war can be felt years later. Take the case of former Army Times photographer Warren Zinn, who took a famous photo in 2003. He recently explained what happened in a first-person account in the Washington Post that was headlined:

“Ricochet: My shot made Joseph Dwyer famous. Did it also help lead to his death?”

“Dwyer was the subject of a highly publicized photograph I’d taken as an embedded photojournalist during the first week of the U.S. invasion of Iraq in 2003. It captured the young medic running toward safety with an injured Iraqi child in his arms. It was splashed across newspapers worldwide and brought Joseph instant fame. And for years, I’d proudly displayed the front page of USA Today featuring the photo. It was a tremendous accomplishment for me; I was only 25 when I took it.

“Now, though, the picture was suffused with a different meaning. Joseph Dwyer was dead of a substance overdose at 31. I’d read news reports that he was struggling with post-traumatic stress disorder. He thought he was being hunted by Iraqi killers. He’d been in and out of treatment. He couldn’t, his mother told the media, ‘get over the war.’ “

“But as I stared at his image on my wall, I couldn’t dodge the question: Did this photo have anything to do with his death? News reports said he hated the celebrity that came with the picture. How much, I wondered, did that moment — just 1/250th of a second when three lives intersected on a river bank in Iraq — contribute to the burdens he’d brought home with him? If I’d never taken his picture, would he have ended up as he did? Would he still have been a casualty of war?”

From Cold War to cosmic war: Why is there so much religious violence?
By Sharon Schmickle
April 7, 2008

Obama’s war speech: How much political courage did it take?
By Eric Black
January 25, 2008

Iraqi refugees face a crisis — but where will they go?
By Sharon Schmickle
November 30, 2008