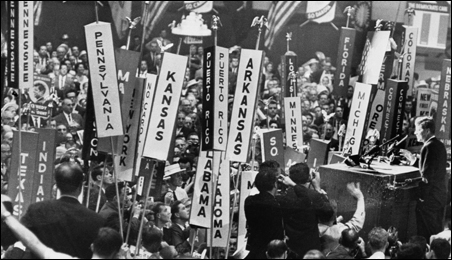 CORBIS/Bettman
Selecting a presidential candidate–as the Democrats did with John F. Kennedy at their 1960 convention—is often less than orderly.

Too many states have moved up their primaries and caucuses, she said, essentially disenfranchising thousands of people who don’t get to cast their vote until later in the cycle.

Klobuchar isn’t alone. Other senators, including Majority Leader Harry Reid, are grumbling about the protracted primary season, pointing to the controversy that ensued after Michigan and Florida decided to bump up their primaries and parties unseated their delegates as punishment. For Democrats, the party would have had a nominee much earlier and would be far more united in the months leading up to the convention if there was a more orderly process in place, some lawmakers charge. 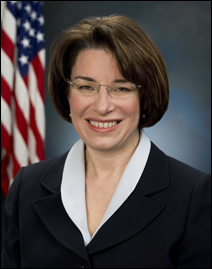 While some Republican and Democratic senators say it’s time for a change, they’re split on how to make it happen and the impasse centers on Iowa and New Hampshire’s place in the schedule. Along with Independent Joe Lieberman of Connecticut and Republican Lamar Alexander of Tennessee, Klobuchar is sponsoring a bill that would establish a rotating regional primary system but would allow the Iowa caucuses and New Hampshire primary to remain first in line.

The two Democrats from Michigan and Florida — Carl Levin and Bill Nelson, respectively — are floating a similar bill, but say Iowa and New Hampshire are the heart of the problem.

“She gives the first two positions to Iowa and New Hampshire, and that’s exactly what we’re trying to avoid,” said Nelson, who is happy his bill will get some air time at a Senate hearing in July. “We need to get a much more representative sampling of large states and small states.”

Front-loading primaries
It all started when the Democratic and Republican national committees threatened to strip delegates from any state holding a primary or caucuses earlier than Feb. 5, 2008. While several states decided to move up voting day, only Michigan and Florida scheduled their events before Feb. 5.

The two states argued that the Iowa caucuses and New Hampshire primaries give too much momentum to a few leading candidates and often are instrumental in weeding out less popular players before the rest of the country has its say.

So-called front-loading has its benefits, said Kathryn Pearson, who is a political science professor at the University of Minnesota. Traditionally, states that hold their votes earlier in the year build momentum for a specific candidate, and tend to determine the nominee early on.

“Since the McGovern era, it’s paid to front-load the calendar,” she said. “Primaries and caucuses in those states generally decided the election.”

“We’re in a race where each state is trying to leap-frog the next, as all the states vie to hold the earliest primary,” Klobuchar said during a September 2007 Senate hearing. “The voters of each state no longer have a say, unless they are able to compete with the slew of other states pushing their primaries earlier and earlier.”

Klobuchar said her bill would fix that problem starting in 2012. Under her plan, four regions — the East, South, West and Midwest — would hold their primaries on the first Tuesday of every month starting in March.

The first region to vote would be chosen by a lottery, bringing more fairness and predictability to the race, Klobuchar said.

But that cycle would start after Iowa and New Hampshire take their turn, and Nelson and Levin say they won’t go for that plan. They contend that favoring one or more states at the beginning of the schedule is inevitably unfair to states later in the cycle. Their bill would require six presidential primary dates, and each contest would feature at least one state from each of six different regions. The order of states within each region would rotate every four years.

Klobuchar’s bill appears to have more momentum in the Senate than the Nelson-Levin plan. Klobuchar has eight cosponsors to her bill, five of which are Republicans. Sen. Dianne Feinstein, D-Calif., is among the cosponsors, and she’s the chairwoman of the Senate Rules Committee, which has jurisdiction over the primary system and is holding hearings next month.

The House companion to Klobuchar’s bill is sponsored by Rep. Alcee Hastings, D-Fla.

Constitutional questions
And no matter which measure gains more support, sponsors will have to grapple with questions about constitutionality. Some, like Northwestern University political science professor William G. Mayer, contend Congress should not meddle in state matters such as these.

While the Constitution does give Congress some power when it comes to elections, “the entire presidential nomination process — anything that the parties or anyone else does to influence the effective set of choices available to the Electoral College — would appear to be completely extraconstitutional,” he argued.

For example, one 1934 court decision — Burroughs v. United States — is typically used by those backing new legislation to support their case,. But Mayer said the Burroughs case is too broadly interpreted. That decision upheld a law that required any committee that raised or spent money to influence a campaign to file disclosure reports, but it did not claim that Congress had sweeping rights to change the election system at its whim, he said.

“It’s most unclear that such legislation is constitutional,” he told the Senate Rules Committee in a hearing last fall.

In the meantime, Nelson and Levin will have to deal with the Iowa and New Hampshire senators who are loathe to surrender their states’ plum spots.

“I keep trying to tell Carl Levin to get a life,” said Iowa Democrat Tom Harkin. “There are more important things, and he’s just gone off the deep end on this one.”

“Get rid of superdelegates ,” he said.

It’s not the primary process that prolonged the neck-and-neck race between Barack Obama and Hillary Rodham Clinton and disintegrated party unity, he said. It’s high-profile party members like Harkin that waited until the last minute to endorse a candidate.

“I’m going to raise the issue at our convention.”

Catharine Richert reports on developments in Congress, agriculture issues and other topics. She can be reached at crichert [at] minnpost [dot] com.

Caucus system: It's quaint, exclusionary -- and so 20th century
By David Schultz
February 18, 2008