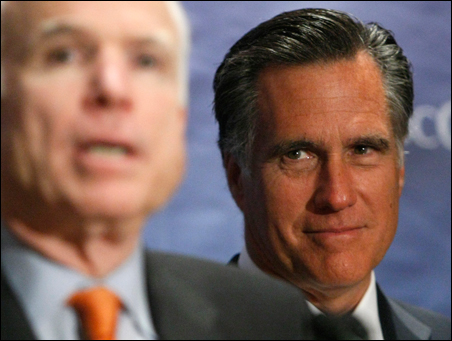 The answer is unknowable, which, or course, doesn’t dissuade journalists and politicos from the quadrennial vice-presidential speculation — as if the nominee were actually leaning on them for advice.

The veep sweep has become a bit like fantasy baseball played for the amusement of bettors. Or like the NBA draft, which gives TV viewers a chance to pretend that they make the picks and build the teams — so they can claim superiority when the Timberwolves make their annual boneheaded selection.

And so, with that feeble disclaimer, let us dive in. What does McCain need in a running mate?

Three answers are often posed: someone who can help win an important state or region; someone who’s ready to be president; someone the candidate likes as a partner in campaigning and governing.

Among the more specific suggestions for McCain: Someone who’s younger. (Isn’t everyone?)  A woman, perhaps. A minority. Someone with executive experience. A fresh face. An evangelical Christian. Someone to help win the lunch-bucket vote in Michigan, Ohio and Pennsylvania. Someone exciting. An attack dog. Someone from a Democratic state who would force Barack Obama to play defense. A good speaker, campaigner and fundraiser. Someone who can boost Republican turnout.

• Mitt Romney. Popular with Main Street and Wall Street Republicans, he’s a tremendous fundraiser. That alone may put him at the top of McCain’s list. But his Mormonism troubles the Christian Right, and his opportunism (he was once liberal on social issues) makes him suspect among some GOP regulars. Besides, McCain may have to overcome a personal dislike for Romney if he taps the former Massachusetts governor and Republican presidential contender.

• Joe Lieberman. Al Gore’s former running mate is a close friend, a fellow war hawk, and a Democratic turncoat. But he’s not a Republican, he supports abortion rights and, as an independent, the Connecticut senator does nothing to excite party purists. “He’s fundamentally a liberal,” the National Review said last week, applying the worst label it could think of.

• Charlie Crist. The Florida governor is a popular vote-getter. But he’s distrusted by business and by the Christian Right. And then there’s the political reality that a Republican who can’t take Florida on his own probably won’t win.

• Tim Pawlenty. McCain loves the Minnesota governor for his loyalty and his fresh-face appeal. But Pawlenty has never been elected by a majority of voters and it’s questionable whether he can deliver even his own state.

• John Thune. The South Dakota senator is a strong conservative and who showed his campaign talent by defeating a majority leader (Tom Daschle). But on the national stage he is as obscure as Dan Quayle.

• Sarah Palin: The Alaska governor shares with McCain a reformist edge, has ties to the military and has a gun-rights profile. She politics and her personal flair could help in the West. But she’s inexperienced and might be more realistically regarded as a future GOP star.

• Lindsey Graham: A Senate ally, the South Carolinian joined McCain and Ted Kennedy on immigration reform. His ties to the military help, but his occasional independence isn’t appreciated by party regulars. He would have made a great running mate for McCain eight years ago, but now McCain needs appeal broader than a white Southern male can deliver.

• Bobby Jindal: The Louisiana governor is a darling of the right wing, the son of Punjabi immigrants, a devout Catholic, and has a winning smile and personality. Jindal is a walking personification of Heritage Foundation policy papers. But he lacks experience and might have the better chance to keynote the convention than to be tapped as a running mate.

• Condoleezza Rice: She’s a megawatt celebrity and an African-American woman who would radically balance the ticket. But, as secretary of State and national security adviser, she has presided over one of the most disastrous foreign policies in U.S. history. Her views on domestic issues are unknown. Her presence on the ticket would hogtie McCain to George Bush, a knot that McCain doesn’t need.

• Rob Portman: The former Ohio congressman has displayed sanity and smarts as U.S. trade representative and director of the Office of Management and Budget (OMB). But he’s a policy wonk and a consummate insider in a year when “change” and “outside” seem important. A high cabinet post, perhaps.

• Mike Huckabee:  The Baptist preacher and former Akansas governor could help McCain with the Christian Right, a group that needs to show up at the polls in big numbers if the GOP hopes to win. He’s a populist, which is good this year, and a terrific campaigner. But he doesn’t play well with the business crowd, isn’t a particularly good fundraiser and doesn’t help the party in the Rust Belt, where votes figure to count most.

• Tom Ridge:  The former Pennsylvania governor was a popular vote-getter in a state that McCain needs, and he’s a decorated Vietnam vet. But he had a difficult tenure as secretary of Homeland Security, he isn’t much of a speaker, and he has pro-choice opinions on abortion that pretty much put him out of contention.

‘The passion gap’
Who among this list can fill the “passion gap” may get the call.

That’s how a Los Angeles Times blogger sees it. He cites an L.A. Times-Bloomberg poll showing that 81 percent of Obama supporters say they’re enthusiastic but only 45 percent of McCain supporters feel that way.

Meanwhile, a story in Investor’s Business Daily suggests that playing it safe may cost McCain. He may have to roll the dice, says writer Jed Graham, quoting several sources. “McCain’s reputation as a straight-talking, reform-minded war hero is keeping him afloat — and within striking distance of Barack Obama — despite rock-bottom ratings for the Republican Party,” Graham writes. “That’s why political analysts think McCain could be taking a risk by putting a buttoned-down Republican insider on the ticket.”

The blog Politico has tapped Romney as the favorite because of his prodigious ability to raise money, but points out that McCain doesn’t have to rush to decide.

“Surprising many Republican insiders, Mitt Romney is at the top of the vice-presidential prospect list,” the blog declares, adding one qualifier: “Lack of personal chemistry could derail the pick.”

Says Politico: ” ‘Romney as favorite’ is the hot buzz [and] the case is compelling. Campaign insiders say McCain plans to name his running mate very shortly after [Obama] does, as part of what one campaign planner called a ‘bounce-mitigation strategy.’

“The Democratic convention is in late August, a week ahead of the Republican convention. That means McCain can size up the opposing ticket before locking in his own.”

Who should be VP? Pundits’ picks for Obama
By Susan Albright
Tuesday, July 1, 2008
Here’s one way to spend your Fourth of July: Mulling over who Barack Obama should pick as his runningmate. That’s what a lot of pundits are doing.

Who will be McCain’s running mate?

Who should be VP? Pundits’ picks for McCain