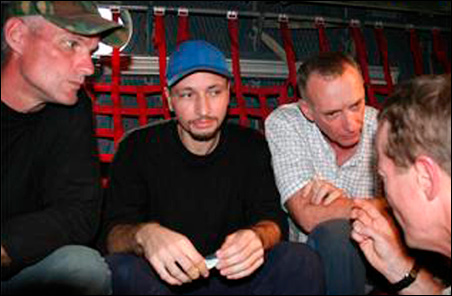 Filled with danger, drama and intrigue from start to finish, Colombia’s rescue of 15 long-held hostages in the Colombian jungle catapulted one nation into euphoria, gave others a big summer lift – and provided irresistible grist for the film and play to come.

That was last week; now come details that flesh out their ordeal, the prospect of fresh negotiations for the release of hundreds more, and hopes for a new political dynamic for the region.

“Among the smiles and hugs shared by three American hostages freed last week from rebels in Colombia and their families, one of the men on Monday angrily denounced their captors as ‘terrorists with a capital T,’ ” wrote the Associated Press’ Elizabeth White of a ceremony in their honor at Fort Sam Houston, Texas.

“Marc Gonsalves said the Revolutionary Armed Forces of Colombia [FARC], which held him and two other U.S. military contractors in captivity for more than five years, refuses to acknowledge human rights and rejects democracy. They use revolution as a justification for criminal activity, he said.”

Years of abuse and illness
Those years, we are learning, were filled with abuse, sickness and escape attempts. One of the most detailed accounts comes from John Otis of the Houston Chronicle’s South America Bureau.

“After fleeing from her guerrilla captors in 2005, former presidential candidate Ingrid Betancourt spent six days hiking through the jungle toward freedom,” he wrote from Bogotá. “But when her fellow escapee, Luis Eladio Perez, fell ill and couldn’t go on, she stuck by him, and the rebels recaptured them. ‘She could have made it,’ Perez said after he was released in February. ‘But she never blamed me.’ ”

It was Betancourt’s fate that drew the world’s attention and the outspoken help of France, where she holds dual citizenship. But that had downsides, Otis explained.

“Though well-meaning, so much attention focused on Betancourt may have prolonged her ordeal: As long as the FARC held Betancourt, the Colombian and French governments would have to pay heed to the guerrilla group.”

Others resented wealthy Betancourt
It also complicated life in the jungle, he wrote. “Most the kidnapped police and army soldiers held alongside her were working-class Colombians. They resented the blue-blooded Betancourt, and there were some instances of sexual harassment, according to Perez, the former senator.

“But Betancourt gradually earned their respect. While some hostages tried to get along with the rebels to secure better treatment, Betancourt attempted to escape five times. She constantly stood up to her guards to complain about the forced marches, the lack of medicine and the way the hostages were chained up like animals.”

Betancourt, he reported, suffered from bouts of malaria as well as depression. ” ‘She almost died,’ said William Perez, an army medic and fellow hostage who was rescued along with Betancourt and 13 others last week. ‘The depression was so deep that she wouldn’t eat. That led to an ulcer, intestinal infections and dehydration.’

“Besides ill health, the prisoners were constantly marched through the jungle to avoid the army. When helicopters flew overhead, the rebels threatened to kill the hostages in case of a rescue attempt.”

Calls for end to ‘extremist’ rhetoric
Now the woman once described by a rebel spokesman as rude, with a “volcanic temper,” has been urging the Colombian government to turn down the heat in its rhetoric, writes the BBC. “[W]hile praising President Alvaro Uribe’s work towards her release, she said it was time to end ‘extremist’ language towards the Farc. …

“She was speaking in Paris, where she flew after her release last Wednesday. In a separate interview for French radio, she said: ‘I think we have reached a point where we must change this radical, extremist vocabulary of hate of very strong words that intimately wound the human being.’ ”

In addition to indications that she will work for the release of those still held hostage, Betancourt may well ultimately seek the presidency again, or another formal leadership role. According to the Houston Chronicle report, throughout her captivity, “Betancourt talked of returning to politics and, along with Perez, drew up a 190-point government plan in case she ever reached the presidency. … Ironically, if she runs in 2010, she could face off against those responsible for saving her.

“One likely candidate is Defense Minister Juan Manuel Santos, who helped design the ingenious rescue mission in which commandos disguised as humanitarian aid workers tricked the kidnappers into turning over the hostages. Another is President Alvaro Uribe, who could try to amend the constitution to allow him to run for a third four-year term. As a result, some analysts believe that Betancourt, rather than going for all the glory, could end up as a foreign minister or as a crusader to free the hundreds of hostages still in the hands of the FARC.”

Fear for the hundreds still captive
The families of those hostages, meanwhile, worry that their lives may be in more danger than before. Simon Romero of The New York Times reported their concerns from Bogota:

“The nation is euphoric after intelligence agents rescued 15 hostages from the clutches of guerrillas last week, but for Magdalena Rivas, the outlook is not so bright. Her son, Lt. Elkin Hernández Rivas, was a young police officer when FARC rebels snatched him a decade ago.

” ‘They rescued the trophy hostages, but what about those still in captivity?’ a despondent Ms. Rivas, 59, said in an interview.”

Her son “is one of 25 political captives still in the FARC’s hands, used as bargaining chips,” Romero explained. “Estimates vary, but at least 700 Colombians abducted for ransom, and perhaps more, are also thought to remain in the control of leftist guerrillas or criminals, including several hundred held by the FARC, as the Revolutionary Armed Forces of Colombia is known. The ransom paid to free some hostages is one of the FARC’s main sources of income; the other is cocaine trafficking.”

Each Tuesday morning, he wrote, “Ms. Rivas treks to the Plaza Bolívar here together with other relatives of FARC captives. Their group, called Asfamipaz, represents family members of kidnapped police officers and soldiers. At their weekly vigil, they attempt to remind the rest of Colombia of their plight.”

New political and regional possibilities
The rescue operation not only has reminded the wider world of that plight, it has altered President Álvaro Uribe’s political fortunes and caused neighboring Venezuelan President Hugo Chávez to change his tune on FARC. According to Juan Forero of the Washington Post, “At a May presidential summit in Brazil, President Hugo Chávez of Venezuela sought out his Colombian counterpart and regional rival, Alvaro Uribe. The two had not spoken in months. But Chávez got right to the point, telling Uribe: ‘We haven’t been giving money to the FARC,’ referring to the rebel group that has operated in Colombia since the 1960s.

“It was a step toward reconciliation. Now, after last week’s daring Colombian military operation that rescued 15 high-profile hostages from those rebels, the next step will occur when Uribe and Chávez meet Friday in Caracas. Often tense over the years, their relationship broke badly after Uribe accused Chávez in March of aiding the Revolutionary Armed Forces of Colombia … .

“Colombian officials said they were pleasantly surprised when, on June 8, Chávez announced on his Sunday television show that armed struggle was a relic of the past. He called on the FARC to unilaterally release the hundreds of hostages the group holds. He said the FARC had ‘become an excuse’ for the Bush administration’s intervention in Latin America, a sharp criticism of a rebel group that just months earlier he had called a legitimate military movement with valid political objectives.”

According to the Financial Times in London, “Mr Chávez — who has in the past expressed sympathy with the group, which has been fighting to overthrow the Colombian state for more than four decades — even repeated a call he made last month for the Farc to lay down its arms. ‘I will repeat it: The time for guns has gone.’ “

A sharp reversal of fortunes
Furthermore, the Times wrote, “Mr Chávez’s conciliatory rhetoric and Mr Uribe’s enhanced international prestige are a sign of the sharp reversal in the fortunes of the two leaders. The shift may in turn presage a broader rebalancing of the neighbouring countries’ rival claims to influence in the region — especially if Mr Uribe’s coup de théâtre translates into lasting victory over the Farc.

“It would also,” it said, “vindicate the strategy of the US in the region, which since 2000 has backed Mr Uribe with billions of dollars of military and economic aid, while enduring the sight of Mr Chávez holding sway over poorer, oil dependent states in the Caribbean and Central America, forging alliances with Bolivia, Nicaragua and Ecuador, and strengthening links with communist Cuba.

“Now, as the Venezuelan leader wrestles with problems at home, Mr Uribe is in the ascendancy. Peace could provide a boost to an economy already benefiting from strong inflows of foreign investment. Colombia could become a more powerful voice in a camp led by Brazil and Chile whose financial stability, growing prosperity and steady social progress offer Latin America a persuasive alternative to Mr Chávez’s radicalism.”

In the meantime Uribe is dealing with a Swiss report accusing Colombia of paying a ransom and staging the rescue (hotly denied), and offering the prospect of direct talks with FARC (absent Swiss intermediaries this time). The drama and intrigue are clearly not over.

Video of Hostages being freed released by Columbian Military