BEIJING — We wrap up our on-the-scene coverage of the Summer Olympics with the views of three of our student bloggers: 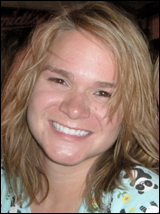 Erica Patterson: Things to never forget
I’m looking back on my time in Beijing, wondering where it went. Before the Games, before the 20-hour days and before I understood Chinese culture, I knew it would be this way.

Volunteering for the Olympics turned out to be the coolest thing I’ve ever done, by far. I can scarcely admit to myself that it’s almost over, and I can’t adequately express my gratitude for this unforgettable opportunity.  Here’s my feeble attempt to sum it all up.

First, I realize how valuable the Olympics can be to a host country. The years leading up to the Beijing Olympics were riddled with controversy and pressure from around the globe. China took the responsibility seriously, and served the world a spectacular, arguably over-the-top Olympics that exceeded so many expectations. The Chinese have been incredibly gracious to all their foreign guests under this history-making microscope.

It’s too early to know how the world will remember these Games, or what will happen when those notorious “One World One Dream” walls come down. But for these two weeks, the world has had no other choice but to look toward China and smile. It’s about gold medals and world records, not bad air quality and a lack of free speech. For a country bombarded with negative attitudes for decades, this means everything.

I’ve mysteriously come to appreciate Communism as a benign, everyday reality for the average Chinese citizen. It’s a system that sometimes proves oppressive to the less fortunate, one that severely counters many of our cherished American values. But it makes every individual feel like they are a part of something greater, something that will ultimately leave a small legacy for the world as they know it.

I witness the product of Communism in the unarmed security guard standing at attention on a quiet street corner and then in the young Chinese Olympic volunteer patiently standing under a tent eager to give a foreigner directions. Only under Communism do you find a group of women scooping puddles into the grass and a baker’s-dozen of men squeegeeing the subway station walls. (Does it really get dirty way up by the ceiling?)

It’s a style of government I would never want to live under, but it allows millions to experience a unique, genuine, selfless sense of pride I will never feel or understand.

Finally, I’ve learned to keep an open mind when it comes to new challenges. I always considered myself relatively fearless, but this experience has often sent me light years out of my comfort zone. For as long as I live, I’ll continue to get myself into strange, frustrating, physically taxing and intimidating situations. But after being on the inside of the Beijing Olympics, I think I have what it takes to give anything at least one shot.

Making the transition back to my home country will surely be a weird feeling. The worst part will be jumping straight into my senior year with jet lag, totally confused over what day it is. I’m not looking forward to the drudgery of college life, unable to afford shopping, eating out or a massage — indulgences I’ve come to take for granted in China.  But I can’t wait for the upcoming days of communicating with strangers in my native language and sharing endless tales with friends and family.  Never again will I take for granted those small American luxuries, such as cheese with every meal and toilet paper in every bathroom.

Even when I’m back to the comforts of home, my head will remain in the smoggy Beijing clouds. This definitely will not be my last visit to China, but this two-month Olympic blip will forever remain one of the most insightful times of my life.

Erica Patterson, 22, of Bloomington, is an International Broadcast Center assistant for the Beijing 2008 Olympics. Patterson is a journalism and sociology major at the University of Iowa, where she just completed her junior year.  Erica interned at NBC affiliate KWWL-TV in Cedar Rapids, Iowa, and now works as a producer, anchor and reporter for Daily Iowan TV.  You can contact her at erica-patterson@uiowa.edu. 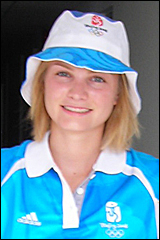 Elizabeth Tuttle: The Chinese Olympics
I arrived in Beijing June 21, and ever since I have seen the city change and develop.  I saw China control the weather, cut back on plastic products and limit cars on the road. I saw migrant workers planting flowers and quickly putting sidewalks together.  But for all of the time spent — seven years of preparation — it seems to me as if Chinese people were the only people here to enjoy it all.

The fans in all the venues I visited, even the Bird’s Nest, were mainly Chinese. The cheering and the national pride were Chinese.  The Beijing Games are my first, so I have nothing to compare them with, but the image of the Olympics I had was different from what I saw.  I walked down the streets and there was nothing to indicate that something special was happening; the city continued on as it did when I first arrived.

There is, I feel, a lack of international presence.  When someone says this is China’s Olympics, they really mean it: Chinese fans, Chinese volunteers . . . Chinese people.

When I was here in October for a pre-Olympic visit, there were decent numbers of Westerners studying and living in the city, but these are the same type of people I see in Beijing now; not the international fans I expected parading down the street singing songs, trading national team jerseys with new international friends. I expected Beijing’s atmosphere and daily life to change completely. I expected people from every culture and country to crowd the already overpopulated streets.

But the day of the Opening Ceremonies might have been the only time I felt this exciting international sport atmosphere because I saw international athletes walking down the streets.

I would not say that the Beijing Olympics were bad; they were just unexciting.  Everything was too well organized and planned so there wasn’t an air of excitement or spontaneity. I remember seeing footage of the soccer World Cup in Germany back in 2006, and the atmosphere there was what I described above: a big international celebration.

There could be many reasons for the lack of international attendance, or maybe it is common for the Olympics to have half-empty stadiums and few international fans. There are several political reasons why people might have been deterred from coming to China. Also, among journalists here, it is said the Beijing Olympic Committee sold most of the tickets to Chinese people and it was difficult for foreigners to get tickets.

But still, I am disappointed there wasn’t more international energy and support; the 2008 Beijing Olympics weren’t the big world party I hoped for.

Beijing as a city is not Beijing as an Olympic host. Beijing itself is such an adventure and so different from the popular tourist spots of Europe. Because of their preparations for the Olympics, I believe China is much better equipped to handle an international crowd. There are normal toilets in more places, American breakfast food is easily found, and there is plenty of pizza.

In general, I would recommend Beijing as a fun and different tourist spot.  My favorite part is the exchange rate when shopping and negotiating prices. I don’t think I will be able to pay full price for anything in the United States ever again.

I have experienced a lot here in Beijing and I don’t regret coming in any way; an opportunity such as this is rare, and I have embraced it fully. Even though the Olympics were not what I expected, they were still a great experience, and I will never forget my time here and the things I was able to see and do in the last two months.

Elizabeth Tuttle, 20, of Minnetonka, is a reporter for the official Beijing Olympic News Service.  Tuttle is a journalism and international studies major in her senior year at the University of Iowa.  She covered Olympic test events for the Beijing Olympic News Service in October and is currently working on a documentary about China and the Olympics. Tuttle can be reached at elizabeth-tuttle@uiowa.edu. 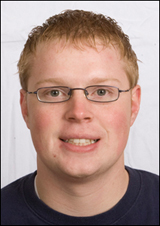 Nate Cooper: Games made their mark
My first Olympic experience was way back in August 2007 under the umbrella called “Good Luck, Beijing,” which was a series of events helping to prepare management and venues for the 2008 Olympics.

After the Games have made their mark on China, all I can say is: Good luck, London. That city will play host to the Summer Olympics in 2012.

The Beijing Olympics drew criticism. They drew skepticism and wonder. They drew the ire of political players, who pegged the Games as a way to draw attention to human rights, pollution and media and Internet freedom. And they drew a record number of viewers who wanted to see if the show was worth the buildup. Unlike most overhyped events, this one certainly was.

It’s not London’s fault. Many of the political issues that drew so many people to critique and assess the 2008 Olympics in Beijing don’t exist in England. Many of the problems that dogged China aren’t issues in the West. While the world was busy learning about China after Athens, London’s bridge to the world has been crossed pre-Beijing.

If China was a journey out of the ordinary, London appears to be a safe haven politically — a fine venue for another worldwide get-together. It’s something different from the previous, like Beijing was. The ante certainly won’t be as big, but that’s OK by me.

Beijing gave the world something to watch in addition to the Games — literally and figuratively. About 840 million people in China watched the Opening Ceremony, which begs the question, what were the other 450 million people doing?

Whether people loved it or hated it, the fact China was the site for the 29th Olympiad, they just couldn’t look away. After all the hoopla that surrounded Beijing and calls for boycotts, only one of the 205 National Organizing Committees didn’t show up (Brunei withdrew an athlete because he didn’t meet national training guidelines).

Everybody protesting for a free Tibet got their airtime before Beijing got its. The Darfur issue got more play this summer, thanks to these Olympics. Ever so slowly, but surely, Internet restrictions were partially lifted in a country where no such progress had been made. Concerns about pollution drifted away as athlete after world-class athlete kept his or her mouth shut on how the air affected them. The lead-up to the Games was a wakeup call, but the Olympics put those issues back to bed.

Of course there have been a few minor catastrophes along the way, but China’s $40 billion Olympic bet looks like it’s paid off.

Nathan Cooper is a volunteer flash-quote reporter for the Olympic News Service and is a 21-year-old University of Iowa senior from Glenville, majoring in journalism and political science. He has reported sports, government and business for the Albert Lea (Minn.) Tribune, the Iowa City Press-Citizen and the UI’s student-produced Daily Iowan. He can be reached at nathan-cooper@uiowa.edu.