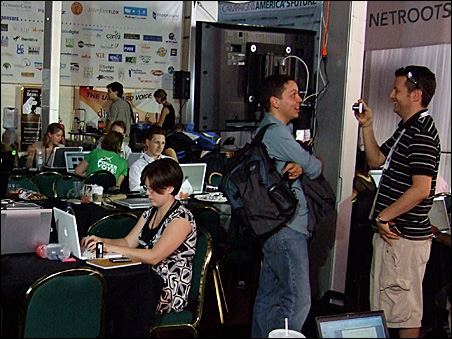 DENVER—While the mainstream press are jockeying for face time with Democratic heavy-hitters in the Pepsi Center, a few blocks away a big tent is buzzing with bloggers who are writing about … well, whatever the hell they want.

It’s called, appropriately, the Big Tent. It’s a two-story, 8,000-square-foot … tent. Upstairs, sponsors are serving up panel discussions with politicians, economists and progressives on such topics as voting rights, the environment and health care.

Downstairs, it’s free smoothies and back massages and 500 bloggers who are working their word-wares from deep, cushy couches and coffee tables.

Of course, there are lots of flat-screen TVs streaming the mainstream media’s doings from down the street at the Pepsi Center.

The Big Tent is completely wireless, unlike the Pepsi Center, which, surprisingly, is not wireless (Convention officials cite security concerns for that).

Big Tent rivals big explosion in bloggers
The Big Tent operation is no small thing for bloggers; in fact, it’s essential for Big Tent co-sponsor Daily Kos. Susan Gardner, its executive editor, says the Big Tent blog fest is the realization of a dream for Daily Kos founder, Markos Moulitsas Zúniga, who was the sole blogger covering the 2004 political conventions.

“He got nosebleed seats,” says Gardner.  “We were the stepchildren of the media, and no wireless access. And for us that’s a killer. We need to be very on top of things, blogging quickly, updating quickly. When (Markos) left, he said, ‘If I ever get a chance, I’m going to create something geared toward our medium.’ “

And, voila! Up go the poles for the Big Tent.

The Daily Kos is joined by such other Big Tent sponsors as Alliance for Sustainable Colorado, a coalition of nonprofits, and Progress Now, an online activist community in Colorado. Other partners include Google and YouTube.

Gardner says bloggers are changing the way voters can participate in conventions and politics in general.

“Most blogs, because they are structured to allow commentary from readers, are more of a conversation than a top-down messaging organ,” says Gardner. “We have ongoing dialogues about what policy should be, what elections are like. We’re ordinary people extraordinarily interested in politics.”

“If anybody is interested in democracy and wants to get in on the conversation, blogs are a really easy way to start,” says Gardner. “We would love it if everyone in the country got so excited about democracy — whether liberals or conservatives — they’d get involved in the conversations that are going on.”

Here’s a conversation starter: Daryl Hannah. The Hollywood actress of “Kill Bill” and “Steel Magnolias” fame, has got her own video blog, and she’s blogging from the Big Tent for the duration. She says her blog is “all about inspiring sustainable solutions and positive stuff.” 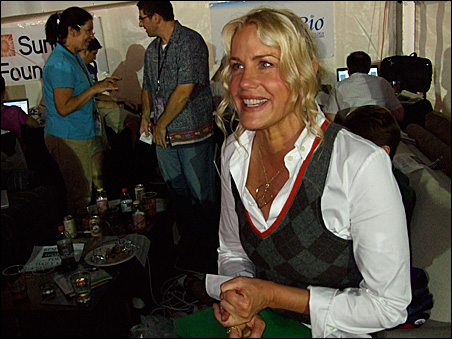 “It’s a great way to share information,” says Hannah. “When people have information, they make wise decisions. If there was a place where I could get the kind of information that I’m putting out on my website, I wouldn’t have had to create it. Every time I come across something, I go, ‘What! I wish someone would have told me that!’ And I put it on my website, you know?”

Don’t think the Big Tent is isolated from more mainstream politicians and high-profile opinion leaders. On the first day of the convention, Sen. Patrick Leahy, D-Vermont, ambled in, and Arianna Huffington’s got her very own comfy lounge upstairs, for blogging, and whatever…