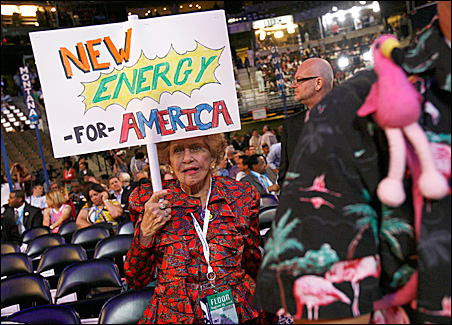 To follow the Democratic National Convention by blog is to absorb a kaleidoscope of sliced-and-diced images and stare cross-eyed until a larger image surfaces, a la Magic Eye.

You’ve got teary-eyed R.T. Rybak leading the “Teddy, Teddy” chants in the Minnesota section of the Pepsi Center. Michelle doting on her hubby. Protestors chanting. A photographer grumbling  that he can’t use a tripod.

And it’s all filtered through ongoing analysis of the mainstream media, such as this sample:

7:52 Shawn: TV guys (NY1 and PBS) are irritating me, keep talking about how there doesn’t appear to be “energy for the candidate” in the hall

Chicago Public Radio‘s Justin Kaufmann noticed that Illinois State Treasurer Alexi Giannoulias’ last name was misspelled on the huge LED sign he spoke in front of. D.C. techie Jill Foster shared an elevator with Arianna Huffington and exchanged a “hey,” which she relayed in an ecstatic audio report on Utterz.

And a deaf college student was tickled  that Anderson Cooper greeted her so graciously.

To follow the DNC by blog is to experience the scene outside the Pepsi Center. The elephant and donkey mascots rolling through downtown Denver on Segways to promote MSNBC. The Google Retreat pictured on Flickr.

That’s exactly what you get: flickers of colors and shapes and sounds. Multi-sensory, multimedia. You can almost taste the Google smoothies  and smell the B.O.

Some 120 credentialed bloggers — and countless unofficial ones — are chronicling the DNC, minute by minute, blow by blow, sneeze by sneeze. Day 1 in Denver provided ample fodder for sarcasm and swooning alike.

If you invite the bloggers, they will come. And if the Democratic Party opens a thread on its blog Monday morning with the simple instruction “Chat away…,” 291 comments will be posted before bed.

The first-ever credentialed convention bloggers have already delivered a more candid take on a political rally, and some members of the mainstream media are following their lead. Those of us following online in the Twin Cities are picking up personal bits of both observers and politicians. Soon we’ll be seeing high-resolution images of Obama’s nose hair. And to think that 68 years ago, Americans didn’t know their president was paralyzed.