Plans for one of the most visible RNC protests — a giant television screen blaring anti-Republican videos and messages near the convention site — came unplugged Wednesday when the state’s Capitol Area Architectural and Planning Board failed to sign off on the plan.

Opponents said it would set a bad precedent: What if other advocacy groups might want to set up giant televisions in front of the Capitol to make their case to lawmakers throughout the legislative session? They also argued that the changing images on the screen might cause safety concerns for passing drivers.

But the protest group, True Blue Minnesota, viewed the action as a move by Republicans to stifle dissent.

True Blue leaders are meeting tonight to consider a lawsuit. If they can’t get the ruling overturned, they’ll consider putting the screen on another nearby patch of public land, farther from the convention action “and not where we want to be,” organizer Andrew Hine said.

True Blue Minnesota has planned for months to use a Jumbotron — 17 feet high and 23 feet across — to trumpet messages during the convention, which begins Monday in St. Paul.

Cost to rent the screen for the week: about $25,000. The group had obtained a permit from the city of St. Paul to put the giant television in Triangle Park (aka Summit Park), at Kellogg and John Ireland boulevards — across from the Minnesota History Center and beneath the tall statue of a Civil War veteran.

But because the park is technically within the Capitol Approach area — closer actually to the Cathedral, but within sight of the Capitol — the CAAP  board had to approve the plan in a zoning variance. And at a special meeting this morning, the measure failed on a 5-5 vote. The board is chaired by Lt. Gov. Carol Molnau, a Republican.

“Carol Molnau engineered this, so what we have to say about the Republican record will be smothered,” said Martha Ballou, a Minneapolis attorney and a True Blue Minnesota organizer. 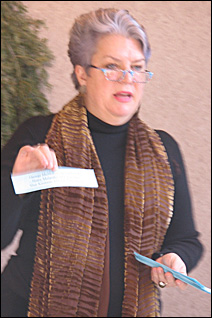 “Nothing about this endangers or disrespects the Capitol approach,” she said.

But Paul Mandell, the board’s principal planner and zoning administrator, said precedence and safety were cited by those voting against the sign.

The group needed a variance from the board because the rules don’t allow animated, moving or changing signs. And the video screen fits the board’s definition of sign, because it “uses words, images, letters, characters or other media to portray a message,” he said.

Opponents cite precedence and safety as concerns
Some board members worried about precedence — think of a Jumbotron on the Capitol steps during an abortion debate, for example — while others thought that safety would be compromised as drivers tried to watch the programming.

Ballou and John Mannillo, a downtown St. Paul building manager associated with the group, said they are considering challenging the board’s ruling.

“Clearly this is a First Amendment issue, I think,” Mannillo said. “We’re talking with the ACLU right now. Police Chief John Harrington has said many times that no one will be denied their First Amendment rights during the convention, if they’re doing it in an orderly way, and what can be more orderly than a big TV?

“We’re not using nasty words here. We’re just holding the Republicans up to their record.”

The back-up location is on a patch of land between the Cathedral and St. Paul College, Hine said. It’s farther from the busy Ireland/Kellogg intersection and wouldn’t have the impact on delegates or the media.

True Blue Minnesota intends to go ahead with plans to put a second Jumbotron in a Harriet Island parking lot, across the river from the convention’s Xcel Energy Center headquarters. True Blue members have a long list of videos and television programs, including some PBS “Frontline” presentations, that they plan to show on the screen.

Both of the giant screens are scheduled to arrive in town on Sunday. Rent for the second screen, a bit smaller, is about $22,000. Ballou said the group is still raising money to pay for the screens.