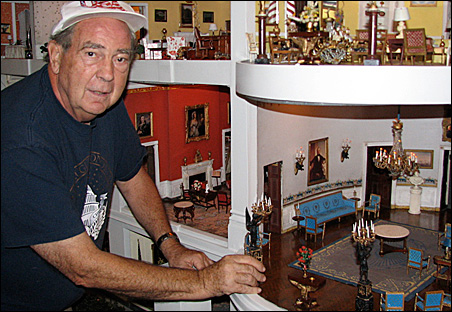 MinnPost photo by Joe Kimball
John Zweifel checks out the blue room in the miniature White House that he built and has maintained since 1962.

It’s like Major League Baseball’s FanFest, or the NFL Experience. Except you’re immersed in history and politics, not sports.

CivicFest, which opens Friday at the Minneapolis Convention Center and runs through Sept. 4, is a way for those who won’t get inside the Xcel Energy Center for the Republican National Convention to get a satisfying taste of the presidency and presidential politics.

It offers a detailed glimpse of the White House (in miniature), a life-size Oval Office, several first ladies’ ball gowns, the Constitution and the Declaration of Independence.

President Reagan’s limo is there, but its license plate reads: Inauguration 1973. So did President Nixon use it, too?

FDR’s limo, a 1938 Cadillac, is on the way, but hadn’t arrived this morning. They’ve put a replica of his wheelchair inside.

An FDR mannequin, in a wheelchair, is part of the exhibit. On Tuesday, it was sitting by itself, next to a garbage bin.

And there’s lots of info on Minnesota, too. A look at the state’s history, the Mississippi River, innovations made by Minnesotans, great moments in Minnesota sports. (The Twins in 1987 and 1991; I’m sure they’ll come up with others.)

For locals and visitors
Organizers say it’s a way to engage Minnesotans in the political process while the Republican National Convention is in town. Convention delegates are expected, too. (The RNC official events are at Xcel Energy Center, 10 miles away in St. Paul, but many delegates are staying in Minneapolis hotels, and most of the big parties are being held in Minneapolis.)

“We want the visitors to get a good taste of Minnesota, because few of them will have time to travel outside the Twin Cities area,” he said.

McTernan said he expects visitors to spend about three hours taking in all the sights. In addition to the historical exhibits, there is a large souvenir store and a section for commercial exhibitors.

The idea for CivicFest did come, in a roundabout way, from the Major League Baseball fan experience attraction that has been part of All-Star games for the past 18 years, McTernan said. When Philadelphia bid for both major-party political conventions eight years ago, city officials included a PoliticalFest component. When the Republicans did choose Philly, PoliticalFest2000 was an adjunct of the convention, focusing on that city’s impact on the presidency, along with White House displays and exhibits from many presidential libraries. They called it “the world’s fair of politics.”

CivicFest is a direct descendant of the Philadelphia event — but more comprehensive, McTernan said. (There was no “fest” when the Republicans held their 2004 convention in New York City.)

Among the more intriguing exhibits at the Minneapolis event are a collection of early flags, and a display about four presidents of the Continental Congress and 10 Presidents of the United States in Congress Assembled, before George Washington became the first real president. I don’t remember any of that from my White Bear High School history classes last century.

Striking details
But the centerpiece of CivicFest is the miniature White House, built by John and Jan Zweifel. Started in 1962, when Jackie Kennedy gave the couple access to the White House, the miniature is updated regularly, to accurately depict, to the smallest detail, the exact furnishings. It’s been displayed at the Smithsonian Institution and many presidential libraries and traveled to every state.

Even the mini-televisions in the house work — it’s magic, said John Zweibel, who has worked for Disney over the years. But the new flat-screen televisions being installed in the White House are causing him problems: It’s tough to fit the miniature electronics in a replica that tiny.

The Zweifels also have collected a treasury of White House artifacts, ranging from the ballgowns to official china used for state dinners.

The couple’s collection is housed in Orlando, in the Presidents’ Hall of Fame, when it isn’t on the road.

Joh Zweifel, 72, said he has a long history with Minnesota exhibits and projects, having worked on the displays at Southdale, when it opened as the nation’s first enclosed shopping mall in 1956.

He also worked on many of the Dayton’s Christmas displays, back when there was a Dayton’s. “I bet there are still some people who remember the Charles Dickens Christmas display we did at Dayton’s,” Zweifel said.

If you go:
Cost: $15 for adults; $10 for students, seniors and active-duty military personnel; children under 8 are free. (There are no specific kids’ areas.)

A newspaper advertising insert offered a $2 discount when ordering tickets online. Go here, click Buy Tickets, select the day and time you want. On the checkout page, enter code PPTWIN for the $2 discount.

Tickets are for a specific entry time, but visitors can stay as long as they want.

CivicFest a lot like FanFest — minus sports plus politics