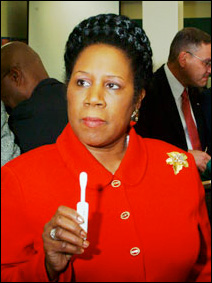 DENVER — Minnesota delegates to the Democratic National Convention start each day with a 7 a.m. breakfast meeting.

They talk a little business. Eat a little food. And half-listen to a lot of speeches from political figures from Minnesota and around the country.

On Day 2 of the convention, delegates already were bleary-eyed when they showed up for breakfast Tuesday.

Then, Sheila Jackson Lee, a congresswoman from Texas, showed up to give a speech. There was sort of a yawning, who’s-she mood in the room when Jackson went to the podium. Minneapolis Mayor R.T. Rybak whispered in the congresswoman’s ear, imploring her to keep it short.

Jackson Lee paid him no mind. And it didn’t matter.

Jackson Lee woke ’em up with a rousing pep talk in which she invoked Hubert Humphrey, Martin Luther King, Paul Wellstone, and Walter Mondale (who was in the room) as to why Minnesotans need to get over their differences between Hillary Rodham Clinton and Barack Obama and get unified.

She could speak with authority on that subject, for at one point in the campaign, she’d been a Clinton supporter. Much later, she switched to Barack Obama. Run, don’t walk, to Obama’s candidacy, she told the Clinton delegates in the room.

Her voice would rise and fall. She moved to the rhythm of her own words.

“Oh, I’ll do a dance up here. I see a light, a march and a movement, thundering, rolling steps …”

The room swayed with her. Ovations were constant. Yawns ceased.

What was amazing about Jackson Lee’s speech is that she had started with notes, but just a couple of minutes into her speech she dumped the notes and ad-libbed.

How’d she do that?

“When I looked out to the audience,” she said after her speech, “I saw the world in front of me. I was looking out, and I saw Somalis and African-Americans and Anglos — that’s what we call white people in Texas — and American Indians and Pakistanis. What a beautiful sight to see that family.”

In fact, the Minnesota delegation is a remarkably diverse group — a far cry from what delegations would have looked like only a few conventions ago.

Beyond that sight, Jackson Lee said, is the fact that she has nothing but high regard for Minnesota’s political traditions. The seven-term congresswoman spoke of Humphrey’s mighty contributions to civil rights, she talked of “my twin brother, (Rep.) Keith Ellison” but, during and after her speech, she spoke most lovingly of Wellstone.

“Here was this important senator, and he came to my little district (in Houston) and let me lead him around,” she said. “He was my mentor. I still feel like I’m walking with him sometimes. I feel connected at the hip to Minnesota.”

The people who had the toughest job here were those speakers who had to follow Jackson Lee to the podium at this little breakfast meeting.

St. Paul Mayor Chris Coleman was among them.

So he didn’t play his bagpipes.

Instead, he bowed to the power of Jackson Lee’s oratory, cracked a couple of one-liners and sat down.

“That’s the Sir Laurence Olivier of oratory,” the mayor said.

For sure, she knows how to wake up a room.

Delegation gets wakeup call from spellbinder