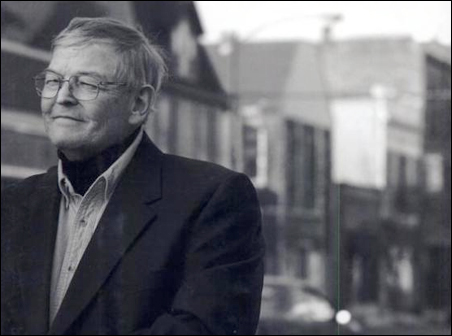 Longtime PiPress columnist Don Boxmeyer, shown in the cover photo of his book, “A Knack for Knowing Things”

Don Boxmeyer was the Master Storyteller of St. Paul for a generation of newspaper readers. He wrote insightful, gentle stories about interesting people in St. Paul — big shots and regular folks alike.

During his 36 years with the Pioneer Press newspaper, Boxmeyer was revered as a skillful writer who knew the community well and, with his genial touch, captured the essence of the town and its characters.

Boxmeyer, who battled health problems after retiring from the newspaper in 2002, died Sunday. He was 67.

“Box” was a life-long resident of St. Paul who was born on the West End, but spent much of his life on the East Side, where he raised his own family. That gave him “dual citizenship” in the city of neighborhoods, he liked to say.

He began his career at the newspaper in 1968 and covered varied beats, including a stint as environmental reporter during the landmark Reserve Mining trial.

City Hall’s Supermayor was a memorable reporting beat
He also covered City Hall during the always-exciting Charlie McCarty era. Boxmeyer wrote about the antics of McCarty, who became known as Supermayor for his nighttime crime-fighting efforts. He also reported on the wild supporting cast of political characters, including Rosalie Butler, Vic Tedesco and Ron Maddox.

He liked to tell how all those City Hall sources would fight with each other all morning and then at lunchtime go across the street to Gallivan’s to eat and drink together.

Some of his best work came after he started writing a general-interest column in the 1980s.

“Don loved getting out and meeting the characters who make St. Paul such a unique place,” said John Finnegan, retired Pioneer Press executive editor. “He was always upbeat and treated people with respect.”

Finnegan called Boxmeyer “an excellent reporter and one of the greatest storytellers about St. Paul and its people.

“He took the stories of the common man and made them come alive for the readers. He had a grasp of city history, its past and its present, that was reflected in what he wrote.”

Stan Turner, who covered St. Paul for KSTP-TV years ago and is now a radio journalist, said, “Boxmeyer understood there is no such thing as a little person. They are the people who do the heavy lifting, but they don’t have clout or money or influence. He was their agent, their representative, and many times, a call from Don to a bureaucrat would miraculously solve a problem for some little person.”

Boxmeyer once said: “Most of the people I wrote about came away feeling pretty good about it, and they became my best sources for other stories. I was the Amway salesman of columnists.”

Sometimes after his columns ran, readers would call in and tell him: You think that’s great, well, listen to this …

Len Levine, a St. Paul City Council member when Boxmeyer covered the beat, said: “He understood the city well and was a very fair and good, honest reporter. People like to criticize the press, but you couldn’t criticize Don’s reporting. He was fair and even.”

In addition to his work that was published in the paper, Boxmeyer was a great asset in the newsroom, Finnegan said. “His enthusiasm and interest permeated the entire atmosphere,” he said.

Other editors remember that he was very generous to other reporters: “For every story he wrote, he brought a tip or two for other reporters to follow. He welcomed every newcomer and even took new publishers on tours around the city, so they could learn the geography and become familiar with some of the overlooked places in town,” said a former editor.

After retirement, ‘Box’ kept writing, despite health problems
Boxmeyer retired from the newspaper in 2002, but continued to write occasional columns even while battling serious health problems.

In 2004, he received a double transplant — a kidney and liver — from a Mankato man. He kept in touch with the man’s family, visiting the 90-year-old mother just weeks ago. And Boxmeyer celebrated the day of the transplant as his “new” birthday.

Former St. Paul Mayor George Latimer recalled Boxmeyer’s courage over the past few years. “I remember how his spirit was so strong, even when he was so sick. Every time I saw him recently, he was always outward looking, never down or depressed.”

Some of Boxmeyer’s favorite columns were collected in a 2003 book, “A Knack for Knowing Things: Stories From St. Paul Neighborhoods and Beyond,” published by the Minnesota Historical Society Press.

Among the stories were his spot-on version of John Nasseff’s rags-to-riches story; a touching tribute to Payne Avenue restaurant legend Irv Serlin; and a laugh-out-loud look at Bobo Betts, a character who ran an amusement center on Rice Street.

On the book’s back cover, Latimer wrote: “What Royko is for Chicago, Don Boxmeyer is for St. Paul. Rich or poor, wise or weird, Don Boxmeyer has a way of getting to the heart of people.”

Hundreds of people packed Mancini’s Char House one summer night to see Boxmeyer and to get his signature on their copies of his book.

“It was really a tribute to Don that so many people showed up that night,” Finnegan said. “There were people from all walks of life. It showed how much people admired and respected him.”

Boxmeyer is survived by his wife, Kathy; sons Erik and Chris and daughter Diana Berg, seven grandchildren and five great-grandchildren. The family plans a visitation Thursday and funeral service Friday.

Before he died, Boxmeyer asked his friend and colleague David Hawley to write his obituary for the Pioneer Press. It turned out well.