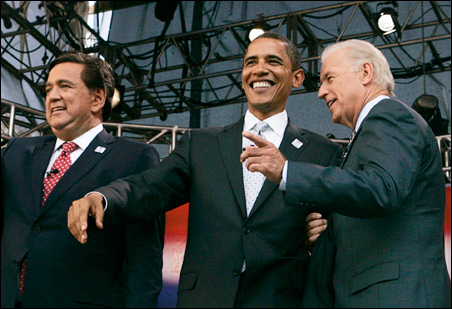 With the Denver convention less than a week away, the buzz over Sen. Barack Obama’s vice presidential choice is reaching fever pitch among campaign watchers and pundits, who expect Obama to make an announcement this week — perhaps as early as Wednesday morning — to get a preconvention media bounce.

The latest lists of probable picks tend to place three men on the A list, relegating some familiar possibilities to B-list or dark-horse status. Here is a look at some respected observers’ thinking:

Citing Obama aides, Adam Nagourney and Jeff Zeleny wrote in this morning’s New York Times that the presumptive nominee “has all but settled on his choice  for a running mate and set an elaborate rollout plan for his decision, beginning with an early morning alert to supporters” and that Obama “had not notified his choice — or any of those not selected — of his decision as of late Monday, advisers said.”

Focus is mainly on three men
Going into the final days, they wrote, “Mr. Obama was said to be focused mainly on three candidates: Sen. Evan Bayh of Indiana, Gov. Tim Kaine of Virginia and Sen. Joseph R. Biden Jr. of Delaware.

“Some Democrats said they still hoped that he would choose Senator Hillary Rodham Clinton of New York, or Gov. Kathleen Sebelius of Kansas, who has been under steady consideration by Mr. Obama’s campaign.”

Advisers told Nagourney and Zeleny that the big choice for Obama “was the extent to which he needed to choose someone who would fill perceived holes in his résumé — lack of experience, particularly in foreign policy — versus a candidate who would reinforce his promise of change or one who might help him win a contested state.

“Mr. Biden, the chairman of the Senate Foreign Relations Committee, clearly fell into the category of helping Mr. Obama on foreign policy, while Mr. Kaine is a relative newcomer to national politics and would reinforce the notion of change. Both Mr. Kaine and Mr. Bayh would help Mr. Obama in a state that Democrats are trying to put in play.”

First to learn: supporters via text and email
The Washington Post’s Dan Balz has Obama waiting a bit for the announcement, which is expected to be made in the form of text messages and emails to supporters, writing that “in a twist that goes against recent history, there are signs that Obama may wait to announce his choice until this weekend or just before in hopes of providing a big boost before the convention opens Monday in Denver.”

Balz writes that “Obama is said to be operating with a list of five finalists, though there is no solid confirmation from his inner circle of who and how many are serious contenders.” His list of presumed finalists also puts Biden, Bayh and Kaine at the top. Here is a bit of what he has picked up:

Biden was “prepping for the job with a weekend trip overseas to Georgia, at the invitation of President Mikheil Saakashvili, to assess the situation there. His stock among those not in the know has risen sharply lately because of world events. How he is faring with the candidate is not known.”

Bayh, Balz wrote, is “a current senator and the former governor of Indiana, one of the red states on Obama’s expand-the-map target list. Bayh is considered a default safe choice and a candidate who, in contrast to Biden, is closer generationally to a candidate who has called for turning the page on the politics of the past. But he generates some hostility among progressives and antiwar Democrats because of his centrist positions on domestic policy and his original support for the Iraq war.”

Big event in Virginia this week
Kaine, “the governor of Virginia and the first governor to endorse Obama, appears to be a finalist. It has already been reported that the Obama campaign will be holding a big event in Richmond this week, fueling speculation that Kaine is very, very high on the list. It has also been reported that the choice of former Virginia governor Mark Warner as convention keynoter has diminished Kaine’s chances.”

ABC News’ Jake Tapper took a shot at reading the tea leaves on Monday, reporting that “By one calculus, Delaware’s Sen. Joe Biden, who made a quick trip overseas for a first hand assessment of the confrontation between Georgia and Russia, may have become the front-runner. But Obama is scheduled to be in Virginia this Thursday, giving him a perfect moment in the days before the Democratic National Convention to anoint Virginia Gov. Tim Kaine as his running mate.”

Tapper’s list also includes Bayh. “The Indiana senator would help Obama win the Hoosier State, which Obama desperately wants to win,” says Tapper. “Working against Bayh, however, is a soft-spoken, some say bland manner that makes some tacticians wonder whether Bayh would be able to fit the running mate role of an attack dog against Sen. John McCain.”

Hillary Clinton seen as a long shot
He lists former Georgia Sen. Sam Nunn and Clinton as long shots. (CBS News, incidentally, reports that among delegates to the Democratic National Convention, “Senator Hillary Clinton is by far the favorite choice for the number two spot on the Democratic ticket, according to a CBS News/New York Times poll … 28 percent volunteer her as their top choice.”)

Finally, if you think a little distance helps offer perspective, here’s a look at Michael Tomasky’s blog in London’s Guardian (titled “You say hello, and I say Bayh”):

“I still think Evan Bayh is the best veep choice for these reasons:

“1. He’s a boring, white, middle-American. I mean very boring and very middle-American and very white. For an ‘exotic’ candidate, these are good things to have in a running mate. They reassure the average white voter that maybe Obama won’t be turning the government over to Al Sharpton after all.

“2. Relatedly, look at this picture of Bayh’s family. Then imagine the Obama and Bayh families on stages together, in Denver and beyond. It’s p.r. gold.

“3. He was a big Clinton supporter, so it would be a fence-mending move.

“4. Indiana is in play, and it’s a big prize — 13 electoral votes. If Obama/Bayh could steal Indiana, it’s very hard to see McCain winning. And Bayh is very popular there.

“5. He has experience and yet is still young enough to fit into the new generation mold.

“6. They like him in Broderland. Would play pretty well with the pundits.”

He concludes: “But two or three others would be just fine, and people obsess over this way too much.”

Who should be VP? Pundits' picks for Obama
By Susan Albright
July 1, 2008

FACTBOX: The hows and whys of the vice presidency