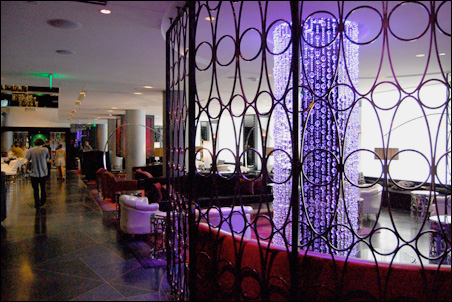 MinnPost photo by Steve Date
The W Minneapolis-The Foshay: A view of the lobby.

The first grand opening of the Foshay Tower was a roaring three-day soiree.

Congressmen, senators, Secretary of War James W. Good were all in attendance and given gold watches as party gifts. John Philip Sousa (“The Stars and Stripes Forever!”) wrote and conducted an epic “Foshay Tower-Washington Memorial March” with a 75-piece orchestra. Fireworks shot from the rooftop above the 10-foot sized letters spelling Wilbur Foshay’s surname.

Weeks after the party, the stock market crashed. Foshay lost his fortune and was thrown into the slammer at Leavenworth, Kan., for mail fraud.

Now almost 80 years later, the Foshay’s doors will reopen to the public Aug. 13 as the W Minneapolis-The Foshay, part of a a hip, MTV-style chain of New York-based Starwood Hotels putting a thumbtack in Minneapolis. The hotel boasts the most expensive packaged suite in the city — the Extreme Wow — with a rack rate of $7,500.

(The Foshay was booked for the Republican National Convention Sept. 1-4 in St. Paul weeks before construction was even completed.)

Although with admittedly less fanfare than in 1929, a second Foshay Soiree will be held Aug 22 and hosted by Preservation Alliance of Minnesota.

End of a market trend
While the Foshay marked the end of a booming era, the W Minneapolis marks the end of a Twin Cities market trend, the biggest round of hotel development the city has seen in years after the condo craze faded. And a large number of them are in historical buildings.

“You’d have to be blind not to notice the surge in hotel development in this town,” said Ralph Burnet, general partner for the Foshay LLC and chairman of Coldwell Banker Burnet, which owns the largest stake in the Foshay.

“This [the Foshay] is one of the most important historic buildings in the Midwest and among the top 20 most important buildings in the country. I’m really happy that by converting the Foshay into a hotel, we’ve made it more accessible to the public than ever before,” said Burnet, who also owns the Chambers Hotel in Minneapolis, a contemporary hotel that opened over a year ago. 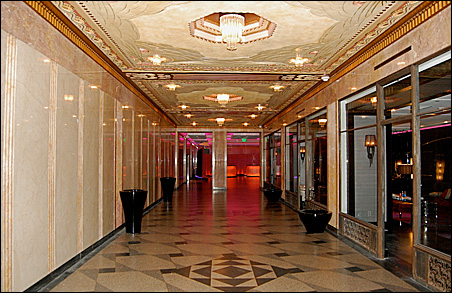 Basant Kharbanda, of Minneapolis-based Timeshare Systems Inc., owned the building before Burnet and his team bought it. When it was purchased, the building was only half occupied with a handful of small tenants such as a women’s physicians group and accounting and public relations firms.

Burnet’s company, Foshay LLC, forked up an undisclosed $75 million to renovate the Foshay, nearly five times the 2006 purchasing price, according to the Star Tribune.

Burnet said that up until only a few years ago, there were no high-end luxury places to stay but only corporate hotels in the Twin Cities. Investors seized the opportunity, speckling the city with classy places to shack up.

Most noted are hotels on the National Register of Historic Places: The Ivy Tower, the Depot Minneapolis, Westin Minneapolis (the Farmers and Mechanics Savings Bank building), Sheraton Minneapolis Midtown (Midtown Exchange) and now the W Minneapolis. 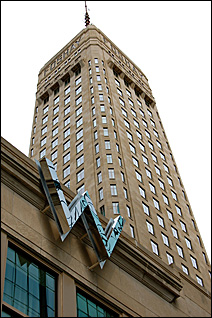 The federal government awards developers renovating historic buildings a tax credit of 20 percent of the total renovation costs for bringing the building up to codes and preserving historical details.

Developers said tax credits barely make the projects economically feasible, and the market for converting historical or older buildings into hotels is has all but disappeared.

“When the office market is weak, but the hotel market is strong, converting a smaller-floorplate [historic] building to a hotel can make economic sense. However, as this has been done to several former office buildings in downtown Minneapolis, which were historic buildings, these new hotels have absorbed the bulk of any under-supply in hotel rooms,” said Rick Collins, vice president of Ryan Construction, developers for the Foshay.

Collins said the trend is over until the hotel financing market improves and there’s new demand for more rooms in the Twin Cities.

Look back to 1929
A night at the Foshay Tower is expensive (the rack rates for standard rooms start at $229), but staying at the hotel will allow visitors to get a glimpse of days gone by.

Minneapolis’ only observation deck will be re-opened to the public after a two-year hiatus exactly as it looked in 1929 – not a thing was changed, including the original telescopes. 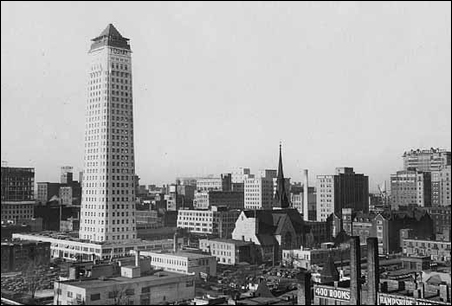 Besides original woodwork, visitors might be curious to see the few remaining butterfly encased windows. Developers had them removed from the rest of the building, the most unfortunate casualty of the renovation process, according to Hess, Roise and Company, historical consultants who worked on the project.

But still in place are parading catwalks Forshay ordered built, seemingly leading nowhere above the bar.

“He [Foshay] was a rebel of his time. … He had one elevator that took his women directly up to his private suite,” said Nikolai Ursin of W Hotel’s marketing office.

On the 30th floor, there is the Foshay museum, which charges an $8 admission fee for non-guests (double the amount charged by the previous Foshay owners) that includes a visit to the observation deck.  The museum includes a multi-media station with footage from the dedication and opening in 1929.

Foshay was eventually pardoned and released from prison, but he never regained his footing in the city. He died a short time later in obscurity in a Minneapolis nursing home.

“Wilbur Foshay wasn’t afraid to think big, take risks or live large,” said Burnet. “And he certainly wasn’t concerned if he upset the status quo. He also knew how to put this city on the map in a big way. … When he built The Foshay Tower, it put Minneapolis into the headlines around the world.”

Elizabeth Gorman is a freelance journalist from Minneapolis. She reports on international issues and works at Minneapolis Public Schools as a Spanish bilingual educator.