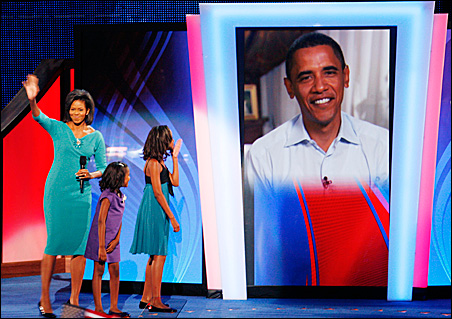 What most characterizes the Denver convention isn’t the historic skin tone of the nominee. Neither is it the residue left from a divisive primary season, although the resentments of Hillary Rodham Clinton supporters drew most of the media attention on the convention’s first day. No, what’s most palpable among Democrats this time is their visceral need to win; their feeling that, after eight years of George W. Bush, they deserve to win.

Through the party’s eyes — and, to a large degree, the nation’s eyes — the accumulated damage to American life at home and to the country’s reputation abroad is plain to see.

The economy is in the tank. Income growth for most Americans has been negligible. Job creation has been abysmal. Nearly 500,000 jobs have been lost so far this year. The housing and credit markets are in critical shape. More than a million homes are in foreclosure. Many people have lost faith in their government’s ability — even its willingness — to protect them from dangerous consumer products, whether from the supermarket, the toy store or the mortgage lender.

Inflation, meanwhile, stands at a 17-year high. Energy prices have hit record levels with no discernable plan from the administration. And, in the aftermath of the Iraq debacle, the nation’s credibility and influence around the world has taken a beating.

Democrats look at that litany and shudder at the U.S. Supreme Court’s decision in 2000 to install Bush as president and presume that things would have been better with Al Gore. Indeed, a wider swath of Americans sees the country on the wrong track (81 percent) and views Bush as a failed president (68 percent).

The pressure is on
So the case for change should be a particularly easy sell this time — except that it’s not.

White working-class voters are especially skeptical. They have trouble seeing Barack Obama as president. They don’t have a feel for him as a man; they aren’t sure of his policies. That’s why every other phrase uttered at this convention is about lunch-bucket values. The party needs badly to convince blue-collar voters that Obama — not John McCain — is the candidate most like them, and most likely to be on their side in a bad economy.

Given Obama’s race and Ivy League credentials, and given the Republican expertise at negatively defining their opponent, the Democrats’ task is formidable. “They should be far ahead,” Fox News commentator Karl Rove said on Monday night. “But there’s this question: Is Obama fit for the job?”

The first poll taken after Obama selected Joe Biden as his running mate found the race dead-even. “Part celebration, part anxiety,” is how a Los Angeles Times headline described the feel of the Denver convention. Clearly, the pressure is on the Democrats to accomplish three things:

• Explain specifically how Obama would tackle the litany of problems facing the country. The candidate’s campaign speeches have been inspirational, but he hasn’t yet spelled out precisely how he intends to bring the change he promises.

• Tell why McCain would be a poor choice. In recent elections (1988, 2000 and 2004) Democrats left it to Republicans to “define” the Democratic nominees, preferring not to “go negative.” The results were disastrous for the party. The “swift-boating” of war hero John Kerry is freshest in Democrats’ memories.

“We can’t let them get away with it again,” U.S. Rep. Arturo Davis, D-Ala., said on PBS’ News Hour. While the party is unlikely to spread rumors (GOP style) about McCain’s temperament or   to question lingering effects of his prisoner-of-war experiences, it will mention McCain’s confusion over how many houses he has and will emphasize his family wealth and ties to big-money interests as a way to claim he’s out of touch with ordinary people. It’s likely also to hone in on McCain’s lack of computer savvy as a way to portray him as “so last century.”

Worth reading
Here are a half-dozen excellent stories that describe the highlights so far and set the table for the convention’s next three days:

• The Washington Post’s Kevin Merida offers a close-up look at Michelle Obama’s Monday night speech, complete with video and a compelling backstory. As Merida points out, the speech was aimed not only at filling in the personal blanks about her husband, but also at smoothing out her own image for the wider public. Merida concludes:

“Speaking to the convention crowd, Michelle talked not just of the candidate who could be president but of the guy she married. ‘And in the end,’ she said, ‘after all that’s happened these past 19 months, the Barack Obama I know today is the same man I fell in love with 19 years ago. He’s the same man who drove me and our new baby daughter home from the hospital 10 years ago this summer, inching along at a snail’s pace, peering anxiously at us in the rearview mirror, feeling the whole weight of her future in his hands, determined to give her everything he’d struggled so hard for himself, determined to give her what he never had: the affirming embrace of a father’s love.’ ”

“There is to Mr. Obama’s story a Steinbeck quality, like so many migratory American tales: the mother who flickers in and out; the absent and iconic father; the grandfather, raised in the roughneck Kansas oil town of El Dorado, who moves the family restlessly, ceaselessly westward,” Powell writes.

“The American DNA encodes wanderlust ambition, and a romance clings to Mr. Obama’s story. The roamer who would make himself and his land anew is a familiar archetype.”

Before Powell is finished, he takes us through Frederick Jackson Turner, Mark Twain, Scott Fitzgerald, Langston Hughes, Johnny Cash, Cormac McCarthy and Herman Melville, with, of course, the obligatory nod to Alexis de Tocqueville. It’s a breezy tale well worth the excursion.

• Powell again sets out to explain Obama, this time his policy direction as not fitting neatly into the conventional mode.

“Mr. Obama would be the first president elected whose worldview took shape in a post-cold war, post-Great Society period. He is fond of reminding audiences he was just 9 as the curtain fell on the 1960s; his suggestion is that he is not captive to old culture wars,” Powell writes.

He continues, “Much of Mr. Obama’s politics, his opposition to the war and support for raising taxes on the wealthy, and his support of abortion and labor rights, falls squarely in the liberal mainstream. … But his ideological departures are noteworthy.”

Powell lists Obama’s views on the death penalty, gun control and his support for religious groups delivering social services as outside the Democratic norm. (He might also have mentioned oil drilling.) Obama’s emphasis on culture, not government, to promote individual success and social cohesion also surprises ’60s liberals. The soon-to-be nominee comes across as a center-left politician with a conservative social streak.

• Although the conflict is probably overblown, U.S. News & World Report does a good job of scanning the media’s coverage of the supposed Clinton-Obama rift that has dominated the convention reportage so far. ABC’s Jake Tapper provides a concise and sharp look at the infighting, including the results of a new Gallup Poll showing that only 47 percent of Hillary voters say they’ll support Obama in November and 30 percent will cross over to McCain. And the Times’ Jim Rutenberg proves a penetrating look into the Republicans’ Denver mischief operation and its success at making Hillary the convention’s main story. The GOP even threw a “Happy Hour for Hillary” cocktail party and drew a huge crowd of reporters to cover Hillary voters who said they had now switched to McCain.

• The Boston Globe’s Susan Milligan delivers not only a look at Sen. Ted Kennedy’s speech but some context to his illness. Traveling to a high-altitude city like Denver carries particular problems for brain cancer patients, making Kennedy’s appearance all the more remarkable.

• The Los Angeles Times’ political blog led today’s coverage with updates on arrests of four suspects in a possible plot to assassinate Obama with a high-powered rifle during his acceptance speech Thursday night at Invesco Field, the Broncos’ football stadium. Police recovered two scoped rifles, ammunition, radios, a cell phone, a bullet-proof vest, wigs, drugs and fake IDs. One of those arrested reportedly wore a ring with a Nazi swastika. He was injured when he jumped out of a hotel window fleeing Secret Service agents, the Los Angeles Times said.

Front and center at the DNC: a need to win