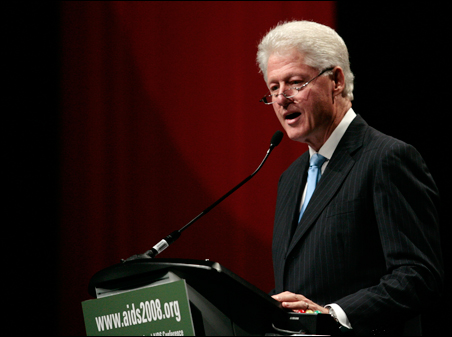 AIDS no longer comes with a death sentence – for those with access to today’s anti-retroviral drugs. But in much of the world that access is limited or nonexistent, leading the international public-health community to concern itself with a new danger: the threat of complacency.

This week in Mexico City, where more than 20,000 delegates have gathered for the 17th biennial International AIDS Conference, speakers have sought to restore a sense of urgency to the fight against AIDS. Without a significant boost in resources, they foresee certain failure to meet a shared international goal: providing universal access to prevention, treatment, care and support by 2010.

“Despite the progress we have made, we are not on course to meet universal access targets, and in fact, appear to be slipping away from our existing commitments,” said Dr. Pedro Cahn, president of the International AIDS Society. “It appears that we are poised to accept defeat when victory is still within our grasp. Our failure to meet those commitments will have an impact on millions of lives. This cannot be allowed to happen. It is time for nations to live up to their commitments.”

Noting the 2010 goal set by the U.N. General Assembly and the Group of Eight (G8) nations, Agence France-Presse reported, “Despite a big scaleup in the past two years, less than a third of all people in developing countries who need the drugs have been able to access them.”

‘A very big dragon’
After flying in from Africa, where his foundation has focused on widening access to drug therapy, former President Bill Clinton stressed the massive dimensions of the world’s ongoing campaign.

“AIDS is a very big dragon,” he said. “The mythological dragon was slain by Saint George, the original knight in shining armor, but this dragon must be slain by millions and millions of foot soldiers.”

Citing data released last week by the Centers for Disease Control and Prevention showing the U.S. incidence has been underestimated by 40 percent, Clinton also “pledged the resources of his charitable foundation to refocus on domestic AIDS,” wrote Ceci Connolly of the Washington Post.

“For Americans, this should be a wake-up call,” Clinton said. “Even as we fight the epidemic globally, we must focus at home. And I intend to do so with my foundation.”

Until now, the Post story noted, “the William J. Clinton Foundation’s HIV/AIDS Initiative has focused overseas, primarily in Africa and the Caribbean. The foundation is credited with helping negotiate drastically lower prices for anti-retroviral therapies and diagnostic tests in places such as Senegal, Tanzania, Rwanda and Haiti.” According to Bloomberg.com, “Clinton’s foundation has worked to reduce the cost of drugs by 50 percent and help more than 1 million people get access to care.”

Such successes – and new leadership by many developing countries, including Botswana and Rwanda – were laid out in a preconference Global Report by UNAIDS. The report also listed huge challenges — including an ongoing global need for better AIDS education.

Youth lack knowledge about HIV
“Nearly three decades into the epidemic, most young people in heavily affected countries lack basic knowledge about HIV … in countries with concentrated epidemics, most populations at greatest risk of exposure to HIV do not receive even basic HIV prevention services,” the report said. To meet that need, the health specialists, policymakers and activists in Mexico City are discussing newly targeted anti-AIDS strategies. For example, André Picard of the Toronto Globe and Mail reported Monday: “For years, the debate has raged over how to best spend dollars to combat the global scourge that is HIV-AIDS: Treatment or prevention?

“Now, a new zeitgeist is emerging: Treatment as prevention.

“As the 17th International AIDS Conference opened last night in Mexico City, scientists, clinicians and activists alike were stressing that aggressive treatment not only allows those who are infected to live longer and be more economically productive, it makes sufferers less infectious, which can help slow the spread of the epidemic. … That realization has placed a renewed focus on marginalized groups such as men who have sex with men, sex workers, intravenous drug users, women and children, who are front and centre at the conference this year.”

Serious underreporting of new cases
Meanwhile, in the United States, Picard noted, “the U.S. Centers for Disease Control and Prevention revealed this weekend that it has markedly underreported the number of new HIV cases occurring annually. The CDC said the number was about 56,300 in 2006, not 40,000 as it reported previously. The agency said that about 1.1 million Americans are living with HIV-AIDS.”

National Public Radio reported that in this country “new infections are dropping in some groups, but not in others. Infections among men who have sex with men have been steadily increasing.

“Twenty-seven years into the epidemic that started in this group, gay and bisexual men still account for more than half of all new cases.” NPR quoted Kevin Fenton, who heads the CDC’s AIDS prevention efforts. “The data really confirm that the most severe impact of the epidemic continues to be among gay and bisexual men of all races and among black men and women,” Fenton said.

Black Americans are hard-hit
The Washington Post story noted that “data from the CDC show that 70 percent of new HIV diagnoses among teenagers and 65 percent of HIV-infected newborns are black. About half of all AIDS cases in the United States are among African Americans, and the HIV prevalence rate among black men is three times the overall rate in the United States, Clinton said.”

Fully 45 percent of new HIV infections in the United States are among African Americans, NPR reported. “Their infection rate is seven times that of whites. Infections among Hispanics are three times higher.

“That, experts say, is where more HIV prevention money needs to be spent.”

Genetically modified crops: ‘Monster food’ or a big step to feeding the world’s hungry?
By Sharon Schmickle
May 13, 2008

Ghostwriting in medicine: Would the real author please step forward?
By Craig Bowron
May 6, 2008

AFP: “Back to basics in search for HIV vaccine, conference told”
August 4, 2008