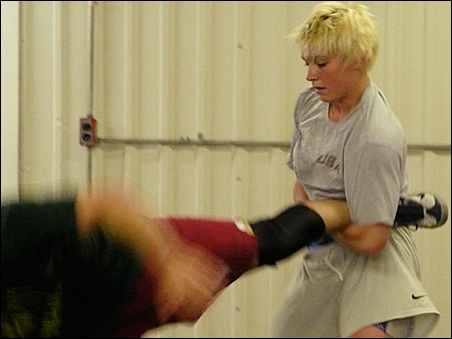 MinnPost photo by Jay Weiner
With no Greco-Roman competition for women in Beijing, Ali Bernard, of New Ulm, will be competing freestyle.

BEIJING — Brothers and sisters have wrestled forever. It’s part of growing up. A decade ago it often meant that the girls longed for their brothers’ trophies and cool gear.

There wasn’t wrestling for girls and women.

Now fathers with cauliflower ears are looking at their daughters and saying, “I loved my sport and I want my little girl to roll around on a mat, too.”

This gender-bending moves to the cultural forefront once more this weekend as women’s wrestling gets under way at the Summer Olympics, the second time females have been part of the Olympic wrestling program.

Talk to three of the four women on the U.S. team including New Ulm’s Ali Bernard and – for better or for worse — they credit their big brothers with getting them started in the sport.

“I started when I was 8. My brother beat me up a lot,” Marcie Van Dusen said in Beijing the other day. “He would come home from wrestling practice and try out all of his moves on me. So I figured I had to learn how to fight back.”

Persuasion on the home front
Now, listen to Terry Steiner, and you learn that it was his spouse and his daughter who created an epiphany for him about just why a guy from North Dakota, who wrestled in Iowa under fabled coach Dan Gable, should leave the security of men’s collegiate coaching to becoming the first national women’s wrestling coach in the U.S.

Steiner, who was a top assistant at University of Wisconsin-Madison before taking over the U.S. women’s program, said we haven’t reached that moment in which hundreds of girls are pulling on fathers’ pants legs and saying, “Daddy, daddy, can I wrestle? Can I?”

But this year’s U.S. team is a second generation of women. None has Olympic experience. Bernard is only 22, and went to college in Canada on a women’s wrestling scholarship.

Still, only four states in the nation – not Minnesota – have girls’ wrestling in the schools: Hawaii, Texas, Oregon and Washington.

Wrestling is a macho community. It’s the nature of the sport. Very combative. When Steiner took the job to direct the U.S. women’s program in 2003, he heard some muttering from his male colleagues: “Terry, what are you doing leaving men’s college coaching for the girls?”

Steiner, 39, said answering that question was a process. But, no matter who he was coaching, he believed in the sport of wrestling and its character development.

“If that’s why I coach, why does it make a difference who’s in front of me?” he said.

Still, deciding to leave a Big 10 men’s team to become the first national women’s coach wasn’t easy for a guy … until Steiner’s wife confronted him.

“I hate how you’re thinking,” she told him.

His wife, Jodi Zueger, told him of sitting in a gym in a high school in the late 1960s, and hearing people boo, ridicule and harass girls who were playing basketball.

And look how popular girls’ basketball is today.

“Maybe just maybe, you can have an influence,” she told him of taking the risk and the new job.

“My wife has a philosophy that every daughter should be able to do what their father has done, if they want to,” he said. “I want that for my daughter, too.”

So, Steiner took the job. And now Raven follows him to the gym when he’s coaching the top women.

She prefers gymnastics right now. But her father would love it if Raven switched to wrestling.

“I could spend more time with her,” he said. He could turn her into an Olympic champion.