The conversation I was having with David Gilbert-Pederson was interrupted by a call from his home.

“Time magazine wants to talk to you,” the kid was told.

“I’ll get back to them,” Gilbert-Pederson responded.

National magazines and newspapers and the networks all will be wanting a piece of Gilbert-Pederson in the coming days. At age 17, the Minnesotan will be the youngest delegate to next week’s  Democratic National Convention.  (He’s eligible to be a delegate because he turns 18 before Election Day.)

Those who follow Minnesota politics very closely already may be familiar with Gilbert-Pederson. Two years ago, he opened sleepy eyes with a fiery speech at a late-night rally in support of Keith Ellison in his bid to succeed Martin Olav Sabo as the congressman from Minnesota’s 5th District. 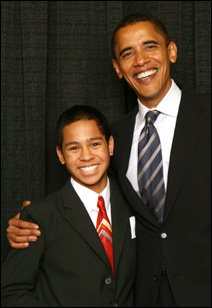 He gave his first speech in support of Ellison
This speech — the first political speech of the then-15-year-old’s life — came at a midnight rally in support of Ellison a couple of days before the 2006 primary. Gilbert-Pederson, who looks younger than his years because of his height (“I’m 5-3 now, maybe 5-4 with my shoes on”), had been asked, by Ellison, to introduce him to the 300 supporters gathered at the rally.

All Ellison told the kid was “speak from the heart.” He did.

“I was terrified, but I loved it,” recalled Gilbert-Pederson of that memorable night.

And the crowd loved the arm-swinging, hard-pacing, fast-speaking kid. He’s been speaking to all sorts of groups ever since. In the last year, most of those talks have been in support of Barack Obama, whom Gilbert-Pederson has met twice and corresponded with once.

“When we’ve talked, I think we both ended up with sore necks,” said Gilbert-Pederson. “Him from looking down and me from looking up.”

Of late, though, Gilbert-Pederson has discovered that most political forums don’t give him time to go into full-blown oratory mode.

When he was running to be a delegate to the national convention at the DFL’s state convention in Rochester earlier this summer, for example, he had just 30 seconds to appeal to the convention for support.

“I barely had time to get my name out,” he said, laughing.

Still, he was one of the top vote-getters to be among the 88 delegates seated at the convention.

Earlier this week, the DFL used Gilbert-Pederson as a symbol of the diversity of Minnesota’s delegation to the convention. (The delegation, which is made up equally of men and women, is 66 percent white, 23 percent African-American, 9.1 percent Asian, 5.5 percent American Indian and 6.4 percent Hispanic. The DFL says that 20 delegates are from traditionally under-represented groups: gay, lesbian, transgender, people with disabilities and youth.)

The news conference forum was a new learning experience. Gilbert-Pederson learned he doesn’t have much control of what sound bites the media end up using. He’d hoped that local television stations would used comments he’d made about how grass-roots organizing would overcome the negative politics of Republicans. To his way of thinking, TV stations used his more bland material.

But learning is what becoming a delegate is all about. In fact, his work with several campaigns in the last couple of years has delayed his high school graduation by a semester.

The home-schooling, he says, is a product of his personality.

“I had a hard time concentrating (in a traditional classroom),” he said. “All my teachers would tell my parents , ‘He’s smart, but he can’t shut the hell up.”’

His desire to be with people and talk matches up perfectly with his summer duties as an intern on Obama’s Minnesota campaign. In his unpaid job, he’s constantly on the phone drumming up youth support for Obama.

Taking part in the convention probably will mean a lot more listening than talking. It also will mean spending a week with people much older than he is. (His two closest friends in the delegation are two of the older delegates, Josie Johnson and Rick Stafford.)

An ice cream social held at his home last week with friends and family helped him raise the money for the trip.

“I wanted to be a delegate because I wanted to see something through from start to finish,” he said. “I was supporting him (Obama) even before he announced he was a candidate. Now I will have a chance to see him through the convention.”

His adrenaline is flowing. His bags are packed.

Back in those days when he was just a kid supporting Keith Ellison, he had only one suit. Now, he’s a three-suit young man, who slips into a hip-hop wardrobe when he speaks to young audiences.

“I will be ready for anything,” he said.