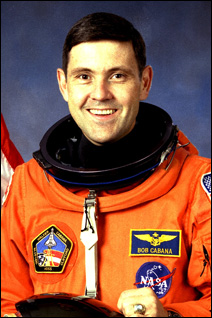 Minneapolis native Robert Cabana was inducted this year into the U.S. Astronaut Hall of Fame. Beyond logging 910 hours in space on four missions, he has served as chief of NASA’s astronaut office and also directed many programs including NASA operations in Russia. Currently, he directs the Stennis Space Center in Mississippi, where rockets designed to propel the next generation of U.S. spacecraft will be tested.

Home for a visit this week, Cabana, 59, will throw out the first pitch at the Twins-Yankees baseball game tonight. On Tuesday, he will appear at the Minneapolis Central Library beginning at 10 a.m.

First, he sat down to talk with MinnPost. Excerpts from the interview are below.

In-depth responses can be heard in the accompanying audio report.

MinnPost: Congratulations on being inducted into the Astronaut Hall of Fame.

Robert Cabana: I was amazed to be on stage with the other astronauts. They were my heroes growing up.

MP: It’s something of an honor for Minneapolis, too, because you are native son.

RC: Growing up in Minneapolis and Minnesota really prepared me well for my future. I got a great education in the Minneapolis public schools. My mom grew up on a farm in Northern Minnesota, and I spent my summers on the family farm driving a tractor and working. So I had the best of both worlds, and I learned a little from both.

MP: How often do you get back to Minnesota?

RC: Usually once or twice a year. This time, I’m going to take a couple of days of vacation and drive up to Bemidji and see all of my mom’s relatives. I’ve got a restored 1950 Farmall tractor, and they have a pioneer farmers’ show up in Itasca State Park. I’m entering my tractor in the tractor pull on Sunday. I’m going to see if I can do better than I did last year. The first time I entered I came in seventh and then I got some weights on my wheels and last year I came in third, so we’ll see if I can’t beat that this year.

MP: As director of the Stennis Space Center, you are in the middle of efforts to return astronauts to the moon and eventually send them to Mars. Tell us where that stands.

RC: First of all it’s a very real program. This is not a paper program. We have hardware.

Let’s start with a little background. NASA’s plan for the future is to complete the International Space Station, which is having its 10th anniversary this November. It’s almost complete. We have 10 more shuttle flights before we stop flying the shuttle.

This new rocket we are developing will carry crews to the space station, but eventually to the moon also and, hopefully, on to Mars one day. We don’t need a winged vehicle to fly to the moon or to Mars, and so we are building a capsule. It’s going to be larger than the Apollo capsule. It will carry four to six astronauts, depending on where it is going. And then we are building a new heavy lift rocket. … The new machinery is already being built in California, and we will begin testing that next year down at the Stennis Space Center.

Right now, the Orion spacecraft on the Ares rocket is scheduled for a first flight in the spring 2015. But we’re hoping to get it sooner than that if we can.

MP: What will be different for the astronauts on the new spacecraft?

RC: The ride uphill is going to be pretty much the same. You are strapped in a seat, monitoring the systems, and it’s a heck of a ride. The shuttle just gets up and goes. So a rocket launch is a rocket launch.

Once in orbit, the space shuttle is totally different from a space capsule. The shuttle becomes an orbiting laboratory. It can carry big pieces of hardware to the space station, and it has a large mid-deck for the crew to live on. A capsule will not be as roomy. It will have to dock to another vehicle and then go on to Mars or go to the moon with the lunar lander attached. But once it attaches to another vehicle, it is going to be very similar.

MP: Why return to the moon?

Robotic spacecraft are fantastic. But until a human has been there and touched it and seen it, you really haven’t been there. So NASA is going to explore and expand our knowledge and our boundaries. Low-earth orbit will become a commercial endeavor.

It’s vital to the future of our country that we have NASA, that we have humans in space and that we explore. Humans were meant to learn, to grow and to explore.

MP: Is that the reason you say it’s vital?

RC: It’s vital to our country. We are a world leader, and part of our leadership is leadership in space. We can choose not to participate, and somebody will step in and fill the void, but that’s not what we are about as a nation.

MP: But won’t there be an interim of several years between the retirement of the shuttle and the deployment of this new spacecraft?

RC: We are going to have to rely on our Russian partners. We are working very well with them. I lived for a year and a half in Moscow running our NASA operations over there. After the Columbia accident, we didn’t have access to the space station with the shuttle, but we continued to get U.S. crews up there on the Soyuz spacecraft, and we will do it again. We help them out, too. It truly is a partnership.

MP: But this week of all weeks, we worry about political relationships with Russia. Do you have any fears that politics will get in the way?

RC: Politics always plays a role in everything we do when nations work together. But from the pure space program point of view, we have excellent relationships on a worker level with folks in Moscow, the controllers on the space station, the crews. That relationship is always going to be there on a personal level.

MP: You also have managed international operations for the space station. Recently, we’ve seen Europe and Japan make new strides in space. China is gung-ho. Are we on the brink of a new space race?

RC: I don’t know if it will be a space race, but I think China has every opportunity or possibility of being on the moon before we return to the moon. They don’t have to do everything we did to get to where we are. They can capitalize on what other people have learned getting there.

But there is no reason we can’t have joint laboratories on the moon, that other people can’t contribute rovers or whatever. There is plenty of room for cooperation, and I think we will see it. The work that we have done at the International Space Station set the stage for the future. It’s phenomenal when you consider that this hardware has been built all over the world. It has come together for the first time in space and it works.

Hardware is one thing. But when you think of all of those people coming together from all of those different cultures working together on a daily basis and getting along, that’s pretty amazing.

RC: I am dedicated to NASA and human space flight. It’s important. I have had opportunities to leave NASA and join private industry and probably make more money, but I enjoy what I am doing.

RC: I would go back in a heartbeat. But there are only so many shuttle flights left, and we have a lot of young astronauts that haven’t flown yet. We need to get them the experience. I had four fantastic missions. Each one was unique, each one was special in a certain way. It would be selfish of me to ask for more. So I will accept what I’ve had. I just have a different way to contribute now.