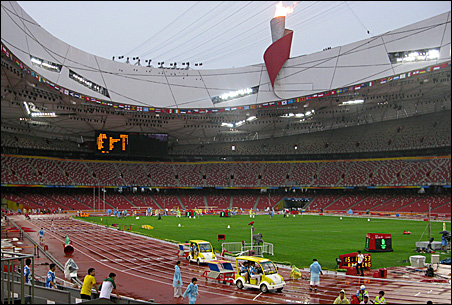 REUTERS/Gary Hershorn
Volunteers prepare Thursday for the start of this weekend’s Olympic track and field competition inside Beijing’s National Stadium.

Yep, this story is a little bit about plastics. My apologies.

But it’s a whole lot about Minnesota-China business relationships and about how small companies in the United States do Olympic business, too. They don’t have to be Visa, Coca-Cola or McDonald’s, the big hitters that are official Olympic sponsors.

They can be like Engineered Polymers Corp., EPC for short. It’s based in Mora, Minn. It has 240 employees.

But when you turn on the TV today and watch the Olympic track meet, you and the rest of the world will see EPC’s work. The company — annual sales not disclosed — manufactured the 6,500 plastic modules that, tiled together and filled with grass, make up the field in the Bird’s Nest, Beijing’s stunning National Stadium.

EPC is an example of how Minnesota companies — big and small — are doing business in and with China every day.

Minnesota-China deals
As executive director of the Minnesota Trade Office in St. Paul, it’s Tony Lorusso’s job to promote business between Minnesota and other nations. China is a key partner.

Minnesota business links go back to the 1880s, when fabled railroad baron James J. Hill began trading with and shipping to Asian nations.

In 1883, Lorusso said, Hill erected a bridge in downtown St. Paul, near where Wells Fargo Center and Minnesota Public Radio’s headquarters now sit. He erected the bridge in honor of the completion of the Great Northern Railroad from Minnesota to the West Coast. The rail link, coupled with his shipping lines to Asia, were intended to increase trade with China.

Even though the bridge only crossed over 7th St., Hill apparently viewed it as “a connecting link between St. Paul and China,” Lorusso said in a recent interview. “That was pretty visionary.”

By 1914, the first Chinese students began coming to the University of Minnesota. And today, of course, the ‘U’ has one of the largest concentrations of Chinese students in the United States. They are aided by and attracted by the world-renowned China Center on campus.  The ‘U’ has graduated more than 8,000 Chinese nationals over the years, Lorursso said.

From Gov. Arne Carlson, through Gov. Jesse Ventura to Gov. Tim Pawlenty, Minnesota’s trade with China has been soaring.

According to Li King Feng  international trade representative for Greater China for the Trade office, in 1987 the amount of manufacturing exports from Minnesota to China was negligible. About $40 million.

For the past three years, Minnesota has exported more than $1 billion worth of manufactured goods here. Add in agricultural equipment, commodities and some services and Minnesota is pushing towards $1.3 billion of annual exports to China. (PDF)

“You’re going to a country with 1.3 billion people,” Li told me last month before I departed for the Olympics. “We have reached the status that Minnesota has sold one dollar to each and every Chinese person for three years running.”

Here’s a neater micro story about how it drills down to Mora.

Instant grass
GreenTech is another relatively small firm in Richmond, Va. It has a unique product for stadiums. Its technology is this: Rather than plant an entire grass field in a stadium, GreenTech installs it in modules. They are 46-inch square boxes — “flower pots,” said GreenTech founder Chris Scott — and they are installed much like tiles on a floor would be. They have interlocking gizmos attached to them.

The modules were designed by Scott and his firm. GreenTech owns the mold. GreenTech hires EPC to manufacture the modules. 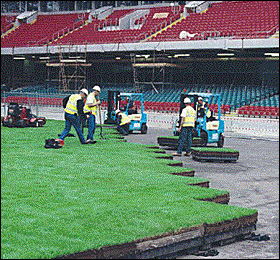 Courtesy of GreenTech
GreenTech makes grass fields that can be assembled piece by piece.

Peggy Voss, an EPC spokesperson, said her company molded 6,150 turf trays for GreenTech’s China project. That was more than a year ago. It amounted to 12 truckloads, and it took EPC employees three weeks of molding for 24 hours a day, seven days a week.

“When we received the order for these, it was pretty exciting around here, knowing we were making part of the Olympics happen,” she said.

GreenTech got the contract with the Beijing organizers — estimated to be worth about $1.5 million — because of this piece-by-piece grass technology.

Because of all the theatrical infrastructure of Opening Ceremonies in the National Stadium and because 10,000 athletes marching in and standing on grass for three hours would destroy it, organizers didn’t want a grass field installed until AFTER the ceremonies.

But the Olympic track meet starts Friday. Thus there was barely a one-week window to put in a full football-sized field.

GreenTech specializes in installing its product swiftly. Earlier this week, using hundreds of workers, GreenTech’s Scott oversaw the installation of the field in about 48 hours.

Soon after EPC shipped the trays in the summer of 2007, grass experts from Michigan State planted grass in each of the 6,000-plus modules.  Grass is grown and watered in the modules before installation. And then each “flower pot” is laid end-to-end, row-by-row.

EPC makes the flower pots that hold the grass that allow the world’s best track athletes to perform at the Beijing Olympics.

Plastics, it turns out, can be pretty cool.