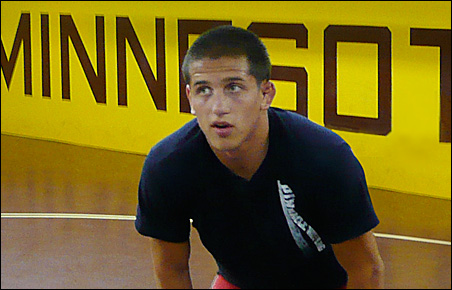 MinnPost photo by Jay Weiner
Jake Deitchler is the latest in a long line of Minnesota Olympians competing in Greco-Roman wrestling.

Tradition is powerful. Its roots run deep. It creates a culture, develops icons and carries on with a certain momentum or through osmosis, via stories and memories.

Now, even through archival online videos.

Most 18-year-olds feel tradition, even if they can’t describe it. They know they spend Christmas Eve at their grandparents, the last week of August at their uncle’s cabin, Super Bowl Sunday at the neighbors, prom night somewhere other than where their parents think they are.

But how often do teenagers embrace a tradition, study it and understand their place within it?

Meet Jake Deitchler, Minnesota’s youngest Olympian. The recent Anoka High grad, bound for the University of Minnesota next month, is hauling Minnesota’s noble wrestling tradition all the way to Beijing today on a flight to China.

What he’s packed surely exceeds the carry-on limit. There’s the load of history on his back. And there’s that torch, an Olympic torch. It was passed to him by men from this state whose shoulders he stands on. Especially the shoulders of his coach, Brandon Paulson.

Indeed, this is a tale of sharing that Olympic torch. It’s about Deitchler exploding expectations. It’s about Paulson retrieving what he’d lost.

State’s Olympic wrestling history
To understand Deitchler’s spot in Minnesota Olympic history, we have to go back to the 1950s, when St. Paul native Alan Rice brought the ancient Greco-Roman style to town. It’s an above-the-waist style, far different from the folk style or freestyle of the United States, the kind we see in high school and college. To the untrained eye, it’s all about throwing and upper-body strength, rather than the tackling and leg work we see in most American wrestling.

Then we have to realize that in every Summer Olympics since 1968, there’s been a Minnesotan on the U.S. Greco team, a pretty amazing streak.

Then, another kid from Anoka High named Brandon Paulson, 22, shocked the wrestling world and won a Greco-Roman silver medal at the Atlanta Olympics. A phenom, he was on track to be a repeat Olympian and, undoubtedly, a repeat medal winner.

He was so confident he’d get to the 2000 Australian Olympics, Paulson named his daughter, who was born in 1999, Sydney, host city of the Games.

Paulson lost at the 2000 U.S. Olympic trials. He didn’t get to Sydney.

Four years later, he came back for more, seeking a spot in Athens. In the longest match in U.S. Olympic trials history – 16 minutes and 54 seconds – Paulson lost in the final in sudden death. At Indianapolis’ RCA Dome, he broke down in tears at the excruciating defeat.

When he returned to his Anoka home the next day, grieving, Anoka High coach Todd Springer was there. Springer told Paulson of an up-and-comer. His name was Jake Deitchler. He was 14. He had potential.

He could be the next Brandon Paulson.

“I said four years ago, ‘God has a plan’ ” Paulson told MinnPost this week. “This was the plan.”

“When you work with someone in a dingy room in the middle of the summer, in the middle of the winter and the mornings and the nights,” Paulson said, a bond develops. And a 16-year-old tends to listen to a coach who can throw him through the air and who has an Olympic medal in his drawer.

But a brash teenager also believes he’s better than anyone. Paulson, in pep talks, would tell Deitchler that he, Paulson, was third in the United States by the time he was 17.

“If he’s in the top three, why can’t I make the Olympic team?” Deitchler said he thought to himself. “It’s in the back of my mind, ‘Come on, I got to do better than that!’ “

Still, after four years of working together, and after Deitchler lost his first match at the Junior Worlds last year in Beijing, the thought that he would make the U.S. Olympic team this year was remote. Very remote.

Dan Chandler, Minnesota/USA Wrestling’s state coach and the steward of the Greco style here for the past 20 years, admitted that as he headed to the Olympic trials in Las Vegas last month, “I wasn’t seeing anyone who would keep our string going,” that string of a Greco wrestler headed to the Olympics since ’68.

In Vegas, Chandler, who also wrestled at Anoke High, stood with Paulson in Deitchler’s corner as the young man fell behind, fought back and zoomed through his 66-kg. weight class, outscoring men far older and more experienced than he. With extraordinary leg and lower back strength, Deitchler has the ability to lift opponents from different spots on the mat, in close, far away, from different angles. He’s unpredictable.

On a hot Saturday night in June in the desert, Jake Deitchler made the 2008 U.S. Olympic team.

But it was Paulson who went bonkers. He jumped up and down. Paulson held his eyeballs to hold back the tears. Paulson was a mess.

“You know, he had his heart broken twice,” Chandler said of Paulson’s Olympic trials defeats. “Maybe as a coach this is kind of a way where he can get that same kind of a rush.”

But it was bigger than Deitchler or Paulson.

“As soon as [Deitchler] won his last match, I looked in the stands,” said Chandler, a two-time Olympian and the steward of the sport in Minnesota the past 20 years. “Alan Rice was sitting right there.”

Rice was the man who planted the Greco wrestling seed 50 years ago.

Chandler’s eyes met Rice’s. From afar, they pointed to each other in victory.

“The string wasn’t broken.” Chandler said. “It was very emotional.”

Said Deitchler: “Everything happens for a reason. [Paulson’s] great loss at his trials might have propelled him to me. He might never have coached me if he hadn’t lost then … Funny that way.”

Obsessive student of sport, lover of tradition
There sat Deitchler, but not very still. The kid is an exploding generator of energy. His legs are bopping up and down as he talks. He’s fiddling with his equipment bag.

We are in the Gophers’ wrestling room, in the basement of the Bierman Building, on the U’s Minneapolis campus. Deitchler has a red, white and blue mouthpiece in his hand and a marvelous sense of history.

A Greco wrestler since eighth grade, he is a student of the sport and a lover of the tradition. He can’t get enough of wrestling.

He recites the names of Minnesota Greco Olympians the way most kids rattle off Twins or Vikings stats.

“I’ve gotten the chance to meet Dan Chandler,” he said, in a tone that sounded as if he’d met Babe Ruth. “I go to the Internet to watch matches. I know about the tradition here. You got Gordy Morgan, Dennis Koslowski, you got Michial Foy, you got Garrett Lowney. Knowing they wrestled here, that gives me some confidence.”

He went on: “I’ve had people ask, ‘What do you in your free time?’ I don’t know, I go to YouTube and watch wrestling … I look for potential competitors. Highlight videos get me excited.”

Last summer, he spent two weeks in Beijing at the junior world championships. He saw where he’ll compete in two weeks. He knows the surroundings he’s entering.

He was motivated to get a tattoo. It’s in Chinese, vertically, from his right arm pit to his hip.

“I got it when I had no idea I’d be going back to China,” Deitchler said.

“It’s amazing what he’s accomplished when you consider two years ago, it seems, he was just a little kid,” said Brandon Paulson, the coach, who has healed. “Every time he steps out on the mat he has a chance to win. I’d like to think I’ve helped a little bit.”

Here are the Minnesota wrestlers who’ve competed in the Greco-Roman style at Olympics since 1956: