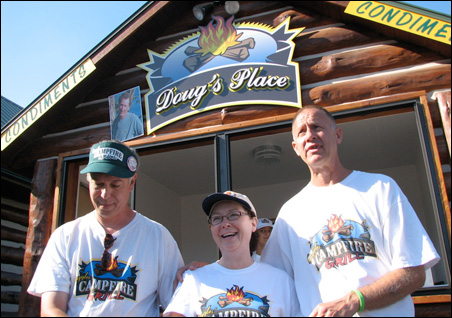 A new building at the State Fair is dedicated to the memory of Doug Holter, co-owner of Giggles’ Campfire Grill, who died last winter of a heart attack at age 53.

It’s not a big building: It’s actually a small log cabin where condiments — onions, mushrooms, peppers, etc. — are dispensed for the walleye cakes and smoked salmon and other fish and game treats sold at Giggles’. Pictures of Holter are on the front of the main Giggles’ building, in the Northwoods section of the fairgrounds, as well as the condiment out-building, just behind the shop.

Holter’s death was a shock, said co-owner Tim “Giggles” Weiss. The two started the popular Fair eatery in 2000, and it’s grown each year. Holter was the creative guy, coming up with the walleye cake. “I told him it was a dumb idea; then we sold 25,000 the first year. Dumb. Right,” said Weiss, who used to run Gabe’s by the Park restaurant in St. Paul.

Holter had opened a Nevada restaurant shortly before his death. His sister, Pat Baltz, and brother, Randy Carlson, also work at Giggles’ during the Fair.

Going, going, gone…to the other side of the Fair
On the verge of moving into a new stadium, the Minnesota Twins have also moved into a new location at the State Fair. Long ensconced in the far northeastern corner of the fairgrounds, by the Pet Center, the Twins tent and mini-playing field for kids is now across from the Horticulture Building, and near the newly renovated International Bazaar.

The Pet Center has set up an outdoor demonstration area on the old Twins site, and just across from there is a new Texas tourism booth, with a music stage.

Fair juxtaposition
You gotta love how the deep-fried Twinkie booth is right across the street from the KARE-11 Health Fair.

New at the Fair: memorial to Giggles’ co-owner, and a home for the Twins