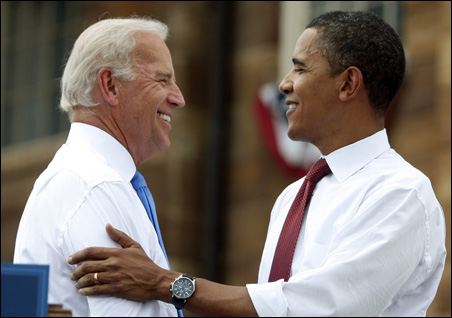 Barack Obama’s pick of fellow Democratic Sen. Joseph Biden as his running mate remained a secret until a few hours before Obama’s presidential campaign revealed it to supporters via text message at 3 a.m. today.

“Barack has chosen Senator Joe Biden to be our VP nominee. Watch the first Obama-Biden rally live at 3pm ET on BarackObama.com. Spread the word!” was the text message. It referred to a rally staged today at the old State Capitol in Springfield, Ill., where Obama had announced his candidacy almost two years ago.

Obama’s campaign had promised that supporters would be the first to know. But Biden emerged as the clear choice hours earlier through a process of elimination, as reporters learned that Virginia Gov. Timothy Kaine and Sen. Evan Bayh of Indiana were told they were not the pick. Sen. Hillary Rodham Clinton of New York also had been ruled out, as had a few other candidates who were presumed to be contending on a second tier.

Clinton said in reaction: “Sen. Obama has continued in the best traditions for the vice presidency by selecting an exceptionally strong, experienced leader and devoted public servant. Sen. Biden will be a purposeful and dynamic vice president who will help Sen. Obama both win the presidency and govern this great country,” the Associated Press reported.

Key reasons for choice
The Obama campaign summed the reasons Biden was chosen this way on its website: “Joe Biden brings extensive foreign policy experience, an impressive record of collaborating across party lines, and a direct approach to getting the job done.”

Biden, 65, has served 36 years in the Senate where he chairs the Foreign Relations Committee on which Obama also sits. Biden also chairs the Judiciary Committee. He has gained name recognition in regular appearances over the years on the Sunday morning television news shows.

Biden reflects a critical strategic choice by Obama: To go with a running mate who could reassure voters about gaps in his résumé, rather than to pick someone who could deliver a state or reinforce Obama’s message of change, the New York Times reported.

While Obama has little foreign experience, Biden is familiar with foreign leaders and diplomats around the world. Just this past weekend, the embattled president of Georgia, Mikheil Saakashvili, invited Biden to visit his country in the midst of its tense faceoff with Russia, the Times said.

Biden initially voted to authorize the war in Iraq, which Obama opposed from the start, but Biden has been a persistent critic of President Bush’s policies in Iraq.

Though he favors abortion rights, Biden is Roman Catholic, giving him appeal to a voting bloc Obama needs to woo. Biden was born in a working-class family in Scranton, Pa., a swing state where he remains well-known and has the potential to sway more votes than in Delaware, the state that depicts itself as the “Small Wonder.”

Not the least of Biden’s assets to the ticket is his distinguished grey-haired appearance. At age 47, one of Obama’s weaknesses is his relative youth and lack of experience.

Wife, daughter killed
Shortly after Biden was elected to the Senate at age 29, his wife and their three children were in a car accident with a drunken driver, resulting in the death of his wife and daughter. His two sons survived, and Biden remarried five years later. He is married to Jill Biden, a professor at Delaware Technical Community College, according to his Senate office website. One of his three children, Beau Biden, is Delaware’s attorney general. A daughter, Ashley, is a social worker and the younger son, Hunter, is a lawyer. The Bidens have five grandchildren.

Biden ran for president in 1988 and again this year, pulling out after Obama and Clinton took commanding leads. His 1988 campaign ran aground after he was accused of plagiarizing part of a speech from Neil Kinnock, the British Labor Party leader at the time. Shortly afterward, Biden was hospitalized because of two brain aneurysms.

On CBS’ Early Show last week, Obama had explained his criteria: “The most important question is is this person prepared to be president? Second most important question from my perspective is can this person help me govern? Are they gonna be an effective partner — in creating the kind of economic opportunity here at home and guiding us through some dangerous waters internationally? And the third criteria from me, I think, was independence. I want somebody who is gonna be able to challenge my thinking — and not simply be a — a yes person — when it comes to policies.”

Indeed, Biden hasn’t always spoken with the same controlled discipline at which Obama has excelled, the Washington Post noted.

“Perhaps the most notable example of that came in January 2007, when Biden announced his second candidacy for president,” the Post said. “Rather than spending the day boasting of his qualifications, Biden spent much of it extricating himself from remarks he made about Obama, having called him ‘the first mainstream African American [presidential candidate] who is articulate and bright and clean and a nice-looking guy.'”

The campaign for Obama’s GOP opponent, Sen. John McCain of Arizona, jumped on Biden’s earlier statements today as it responded to the selection, the Times said, offering a glimpse into the line of criticism that awaits the Democratic ticket.

“There has been no harsher critic of Barack Obama’s lack of experience than Joe Biden. Biden has denounced Barack Obama’s poor foreign policy judgment and has strongly argued in his own words what Americans are quickly realizing — that Barack Obama is not ready to be president,” McCain’s spokesman, Ben Porritt, told the Times.

The selection of running mate came as Obama’s campaign shifts into a critical phase, the conducting of the Democrats’ four-day convention in Denver beginning Monday. McCain has recently eaten away at Obama’s early lead in the race. The Democrats hope to pull ahead again with Biden at his side and the convention projecting his promise of change from the highly unpopular Bush strategies.

A new poll suggests the choice of Biden alone is unlikely to shake up the race. In the Washington Post-ABC News poll completed Friday night, three-quarters of voters said picking Biden would not sway their votes one way or the other, the Post reported. But it often takes several days for new developments to settle in with voters.

McCain, predicted from his home in Arizona that the Democratic convention will produce a huge gain in the polls for Obama, the Post said. But it also noted that “McCain’s campaign is trying to raise expectations to a point Obama can’t possibly reach.”

Sharon Schmickle reports on science and on national and foreign affairs. She can be reached at sschmickle [at] minnpost [dot] com.