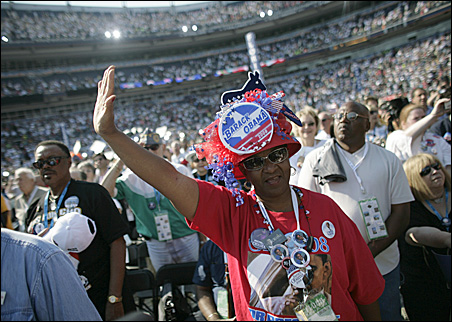 INSIDE INVESCO FIELD AT MILE HIGH, DENVER — Somehow it was all working.

Somehow, one by one, people were clearing security checkpoints and entering a football stadium to see Barack Obama deliver his acceptance speech as the Democratic Party’s nominee for president.

The sun was hot, with temps in the high 70s. The lines, from all directions, were long. Yet, people were in high spirits as the 80,000-seat stadium started filling hours before Obama’s speech on the closing day of the Democratic convention.

In fact, convention delegates were seated on the football field, as if this were just the finale to just another convention. And there were typical convention speeches delivered by politicians pretty much unknown to most of us as mid-afternoon moved toward late afternoon.

“Razzle-dazzle, no substance,” Republicans were saying even before it began. Perhaps. But somehow it was all working.

The people streaming through the checkpoints were, at worst, patient; at best, buoyant. The spectators filling the stands cheered the delegates. They cheered the predictable speeches. And they waited for the rock show entertainment that was expected before Obama’s speech.

“That’s what he is, a rock star,” grumbled Republicans.

That was a standard line delivered by everyone from Minnesota Gov. Tim Pawlenty to Sen. John McCain. These attacks, of course, are a classic political strategy: If you can’t top it, attack it.

The fact is, Obama’s campaign was pulling off this massive political celebration. Jennifer Hudson of “Dreamgirls” fame sang the national anthem to huge cheers. Fireworks exploded during the “bombs bursting in air” portion of the song.

Everything was working, and the people kept coming into the stadium.

In the midst of all this rock festival joy, there were powerful reflections, too — especially among African-Americans in the Minnesota delegation.

Two significant anniversaries
This day, Aug. 28, was loaded with significance. It was the 45th anniversary of Martin Luther King’s “I Have a Dream” speech in Washington, D.C. And it was the 63rd anniversary of the lynching of Emmett Till,  a black teenager who had made the fatal mistake of whistling at a pretty white store clerk in Mississippi.

Now, Barack Obama was giving his acceptance speech as the leader of the Democratic Party.

Josie Johnson, 77, helped organize Minnesotans to go to Washington for King’s great speech. She was there. Now, she was about to hear a speech that she thought she’d never hear.

“I never believed I’d see this in my lifetime,” she said. “Dr. King’s speech was for the oppressed. Obama’s speech is the American dream come true.” 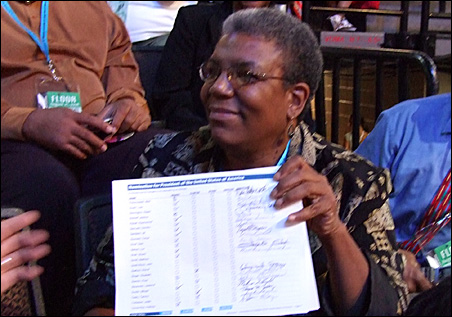 Matthea Little Smith is a delegate and the daughter of Matthew Little, the 87-year-old Minnesota civil-rights icon.

“There’s huge pride in what’s happening today,” she said. “Barack Obama has transcended race, but there’s sadness, too. I know now that I limited my vision by believing the day would never come when an African-American could be president. Now, we’re so close. I wish my dad was here to see this.”

But, she added her dad might be part of an even bigger moment for African-Americans. He’s one of Minnesota’s electors in the Electoral College system, meaning he might end up in Washington casting an electoral vote for Obama.

Jettie Ann Hill, another African-American in the delegation, said each day of this convention has made her more reflective. She was born in a small town in Mississippi. When she was a small child, her family moved to Cleveland, but each summer, the family would take a vacation trip back to Mississippi.

“We’d be crossing the Mason-Dixon Line and my mother would say, ‘OK, no water, no going to the bathroom until we get to Grandma’s house,'” Hill said.

Now, this: A black man accepting his party’s nomination for president. 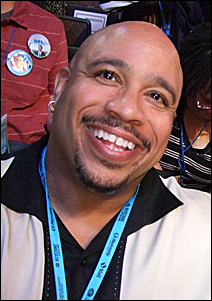 Ralph Remington, a Minneapolis City Council member, African-American and Minnesota delegate, didn’t know whether to laugh or cry as this remarkable day unfolded.

“I’m emotionally overwhelmed,” he said. “We started this months ago, and now I can’t believe the time is really here. I”m 45 years old, I hoped I’d see this day, but I didn’t know if I ever would.”

During the hours leading up to tonight’s speech, Remington admitted his eyes filled with tears.

“Just think about it,” he said. “Not that many years ago, neither of the top two candidates [Hillary Rodham Clinton or Obama] could have voted. They couldn’t even have been seen together. How do you explain it?”

Perhaps it is all unexplainable. The people just keep coming, patiently, happily, into the stadium. Hot dogs, rock music, speeches and oh, so many people.

Somehow it was all working.

And throughout the night, everything kept working.

A laid-off worker from Indiana gave a speech ending with the statement: “This time I’m going to vote for a president who puts Barney Smith first over Smith Barney.” That prompted the crowd to respond, “Barney, Barney, Barney …”

Then, Joe Biden came out on stage, looked around the jammed-packed stadium and said, “When we talked about an open convention, this was what Democrats meant.”

When Obama finished his acceptance speech, fireworks, instead of the traditional balloons, filled the air. So, too, did red, white and blue streamers and confetti.

Josie Johnson, meanwhile, sat in her chair and looked at the sky, her hands clasped.

“This,” she said, “was beyond anything I could have imagined.”