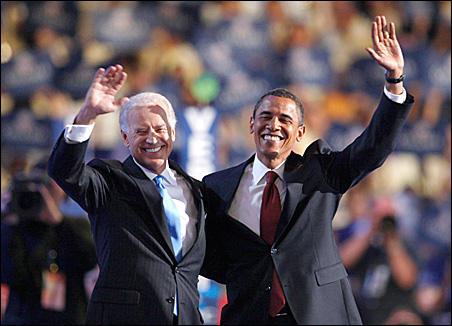 Change has never been more evident at an American political convention, as the complexion and gender of Barack Obama and Hillary Rodham Clinton clearly show. Yet the most critical task ahead for the Democrats has not changed since the historic turn of 1980: win the approval of white working-class voters.

As Obama delivers tonight’s acceptance speech, he must make good on the old French expression about things staying remarkably the same in a changing world.

Yes, he must emphasize the obvious appeal of his next-generation approach to the challenges of a new century. But he must also remember that the sticky old problem of the so-called Reagan Democrats has not gone away. Journalists and political scientists have grown weary of dissecting this fickle group. Yet for Obama — and for John McCain, too — the lunch-bucket crowd represents a pivotal constituency that often votes Democratic for Congress but eludes the Democrats’ presidential grasp.

Since 1960, no northern Democrat has won the presidency; no Democrat associated with liberal or culturally elite values has scaled the mountain — not Humphrey or McGovern, not Mondale, Dukakis, Gore or Kerry. Especially since the watershed election of 1980, Republicans have been masterful at appealing to white working-class voters. They’ve spread social fears about abortion, gun control, welfare, gay rights and other cultural matters, and they’ve portrayed Democratic presidential candidates as weak-kneed on defense and insufficiently patriotic.

Incomes have steadily eroded
The Republican feat is all the more remarkable considering the economic trajectory of the era. Working-class incomes have steadily eroded since the mid 1970s. The Census Bureau reported this week that the median income of Americans rose slightly last year, but is still 0.6 percent lower than in 2000. Meanwhile, 7.2 million fewer Americans have health insurance now than eight years ago.

As Thomas Frank pointed out in his 2004 book “What’s the Matter with Kansas?” Republicans have persuaded this pivotal group to vote repeatedly against their own economic interests — to support candidates whose laissez faire economic policies have the main effect of shifting wealth to the wealthiest.

Recapturing those votes — many of them cast for Hillary Clinton in swing-state primaries — will be Obama’s foremost task in what shapes up as an extremely tight race just ahead. Hillary’s husband framed the matter nicely on Wednesday by comparing Obama’s quest to his own bid for the presidency in 1992, when “Republicans said I was too young and too inexperienced to be commander in chief.”

Unusual tack in praising McCain
Clinton took the unusual step for a partisan speech of praising John McCain as a national hero. “He loves our country every bit as much as we all do. And as a senator, he has shown his independence of right-wing orthodoxy on several issues. [But he] still embraces the extreme philosophy which has defined his party for more than 25 years.”

If you liked the last eight years, you’ll love John McCain seemed to be the point the Democrats stressed most on Wednesday as a way to set up tonight’s Obama speech before what is expected to be a crowd of 75,000 at Invesco Field.

Whether the candidate’s economic message has penetrated this convention’s basic story line of Obama-Clinton conflict is problematic, however. Tonight’s speech must make clear Obama’s identity and qualifications, while convincing white working-class voters that he’s not just a celebrity but a man with realistic answers to their problems.

The San Francisco Chronicle’s Carolyn Lochhead summarized it this way:  “Hillary Clinton won blue collar voters through a heavy dose of economic populism combined with intense retail politicking through diners and small towns … . Clinton transformed herself into a heroine of the working class, winning most of the later primaries.”

Closer contest than expected
But large swaths of small-town Ohio, Pennsylvania and Missouri cast hardly a single vote for Obama, she noted, citing polls that now describe a tight national race and a far closer electoral contest than Democrats expected at this point.

“Only half of Clinton’s supporters are definitely behind Obama,” she wrote. “A fifth of Clinton voters plan to vote for McCain and another 10 percent may stay home.” As for the state-by-state picture, polls show “McCain tying Obama in Virginia and Colorado, gaining an edge in Ohio, Florida, New Mexico and Nevada, and establishing a strong foothold in Missouri.

“Many swing state delegates think the Obama campaign has got to start pounding on the economy, emphasizing the sharp contrast between the candidates on the issue that has voters most upset,” Lochhead concluded.

Washington Post columnist Ruth Marcus said Obama’s appeal to working-class whites may be toughest not because of his race but because he comes across as too perfect.

Marcus wondered, however, whether anger is an authentic response for Obama, who seems altogether unflappable.

“Now that others have helped set the stage, Mr. Obama must demonstrate his own passion and policy mastery. He needs to show that he has his own plan for solving this country’s many problems, from reviving the economy to rebuilding a broken military. That is especially true if Mr. Obama is to win the votes of moderate Republicans. Many recognize that President Bush’s terms have been a disaster but still see the Democrats the way Republicans have painted them: the party of a weak defense and economy-killing taxes.

“… Mr. Obama got to Denver in large measure because of his ability to inspire Democratic voters. He has a strong case to make now against the Republicans’ claim to be the party of prosperity at home and strength abroad. After eight years of President Bush, the country is neither prosperous at home nor respected abroad — and increasingly not even feared.

“But it is not enough to declare Mr. Bush’s terms a disaster. Mr. Obama’s task is to make the case unequivocally that his ideas and his party’s ideas are the best way to recover from that disaster.”

In one sense, Obama’s challenge at the football stadium tonight, among many others, will be to place one foot firmly into the future while reaching back to pull across the goal line as many skeptical white working-class voters as he can. It’s an old theme in presidential politics, but still the most important. The more things change, the more they stay the same.