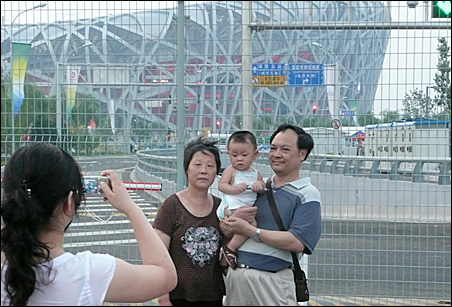 MinnPost photo by Jay Weiner
Thousands gather every night to be near the Bird’s Nest and to be photographed with loved ones.

BEIJING — They gather. They pose. They argue about where to stand to best see the eye-popping National Stadium, the Bird’s Nest. Thousands of people.

The Beijing Summer Olympics — wrapped in geopolitical and environmental issues — begin in this humid city Friday, but the pilgrimage has begun.

Fencing surrounds the Olympic Green. Solemn soldiers stand guard. The 4-square-mile zone of sports facilities, corporate pavilions, athletes’ housing, media centers and landscaping has walkways the width of airport runways. The stadiums are new and sparkling and, of course, big. Everything is big.

But outside the fences, a small town — by Chinese standards — congregates every night here. Parents and children, grandparents and grandchildren, lovers and friends, on inline skates and bikes and carriages. They are drawn to the Olympic zone in the northern sector of the sprawling city. It’s a place to see and be seen.

They take pictures. The Bird’s Nest must be in the background. Each child, each grandmother must be positioned just right. This is the place where the Games that China has wanted for 100 years will occur. This is where China will try to win the most medals and execute the most spectacular Summer Olympics of all.

These people want to see where it all will happen.

My life here
I am no expert on China, far from it. But I will write about some issues — from Darfur to city planning — and try my best. Comments and thrown tomatoes are welcomed.

And my life here at the relatively posh Beijing Conference Center, just south of the Fifth Ring Road, about five miles from the Olympic Green, may be of no interest to you. But I will share some experiences with you. After all, I’m 9,000 miles away and have to tell somebody what I’m up to.

Best part of my hotel is the breakfast. For those of you who have been to China, you’ll understand. Today: lilly with pumpkins, fried noodles, steamed buns, kale, steamed tomatoes and a raisin bread roll. There is a single rose on every table. Each table is covered in a gold brocaded table cloth. Each chair has a high-backed seat cover, throne-like.

Service is daunting. The wait staff watches me as I eat. I have never been neater in my life. I’m afraid to drip anything. I’m not sure of the consequences.

Security efficient, volunteers omnipresent
Perhaps all of the soldiers and all the police are disguised as one of the zillion volunteers with their distinctive sky-blue polo shirts and their warm-up jackets and khakis. But I have been to lots of Olympics with a more obvious police presence than these.

The other night I wandered towards Tiananmen Square, about a 15-minute cab ride from my hotel, past the Beijing Hotel, from where the famous “Tank Man” photo was taken in 1989. You know, the student attempting to stop the tanks from entering the square during the democracy demonstrations.

There were uniformed personnel around, sure, but, believe me, cops and soldiers in Barcelona in 1992 and Athens in 2004 displayed more machine guns than I’ve seen so far. Like none here … so far. 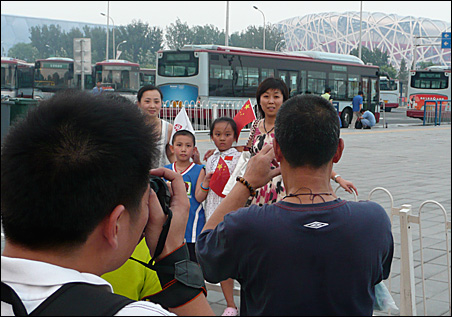 In fact, security systems here are thoughtful. In years past, a journalist would hop on his or her bus at the hotel, arrive at the Main Press Center and wait in line to go through your standard airport-style magnetometer. Raise your arms. Get wanded. Wait. Wait. Wait. Photographers and their equipment created bottlenecks.

Here, that security measure has been decentralized. We are inspected every morning when we leave the hotel and before we get on the bus. Our credentials are scanned into a computer system that OKs the bar code.

No gray plastic bins to place our watches, cell phones and other metallic objects. A young man hands me a tray covered in a red-and-yellow velour doily. He brings my belongings to me after I cross the metal detector. I can bring water on the bus, but first I must take a sip … now, that’s something the TSA should consider. It’s all very quaint. It’s icily effective.

The bus is thus a secure missile driving along the freeway to the very secure Olympic Green that is easy to get into, but almost impossible to get out of.

Internet blocked
When it comes to security, the Internet is another matter. You’ve read about how Amnesty International’s site was blocked for a while. A key Darfur advocate site remains unavailable to me.

But little ol’ me has set up my own website. www.jayweiner.com. It’s aggregating my MinnPost work and other stories for a few other national outlets.

Guess what. My site is blocked here in China.

I can Google Tiananmen Square and see photos of that “Tank Man,” the most iconic democracy site of all. But I can’t get to my own darn website with a few Olympic stories.

They must know about me.

One world
They talk a lot about “harmony” here. The slogan of the Games is “One World, One Dream.”

There is every reason to be cynical about this political and corporate bacchanal. Not everyone is thrilled about having the Olympics here.

It’s surely a monument to globalization as companies buy into the Games to affiliate with the Olympic “brand” and expand their businesses here.

Absolutely, it’s a political event. About 80 heads of state are expected here Friday for the Opening Ceremony, as many as have gathered for any event of any kind ever, we’re being told. We know about Tibet and Darfur and human rights and press freedom and environmentalism.

Still, two days ago, the China Daily, the official English language newspaper, reported that Chinese President Hu Jintao said, “It is inevitable that people hold divergent views, but politicizing the Olympics will not solve the problems.”

The Olympics are a political animal. Iraq’s team was almost barred. The International Olympic Committee prohibits political demonstrations by athletes in venues. China spent $40 billion to stage these Games. There was a truck bomb attack in Western China the other day, allegedly conducted by Muslim Turkic militants. This ain’t no typical sporting event.

But often, during a 17-day festival of mega- and unknown sports, all of that gets reduced to simple human exchanges. I’m not saying politics are eliminated. I’m just saying there’s no way they can dominate an event’s life for three weeks. It would be too tiring.

Today I had to travel into the financial district for an interview. The directions were a bit complicated. The man I interviewed emailed me his address and directions Monday. I stored them in my iPhone, which is receiving emails pretty well.

I showed the directions to the taxi driver. He read them, nodded and then zoomed toward the ancient but redone wilds of Beijing, with its hazy skies and its gleaming skyscrapers. In our modern world, communication is a marvelous thing.