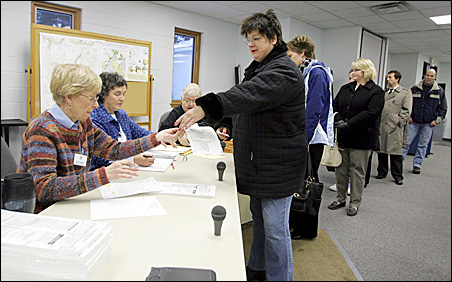 DENVER — Only a few months ago, the major political story in the country was the need to reform the system for choosing presidential candidates.

But will all the excitement surrounding the nominations of Barack Obama and John McCain make folks forget the issue? Have the messes in Florida and Michigan, the rush of states to be at the front of the primary line, the crushing crowds at Minnesota caucuses and the uber-power of Democratic Party superdelegates  become dim memories?

Though reform of the nominating process is not in the forefront of the Democratic National Convention, it is being discussed in hallways and among party insiders. And at  next week’s Republican National Convention in St. Paul, a plan for fixing a broken system may be voted on by delegates.

Minnesota Secretary of State Mark Ritchie said Monday that the Republican Party’s rules committee will vote on whether to adopt something called “the Ohio Plan.”

This plan would be similar to one the country’s secretaries of state have been pushing for at least a decade.  Under the proposal, blocks of states would hold their primaries and caucuses on the same date and each of the blocks would rotate their  spot on the calendar so that no states always would be first and no states always last.

“As I understand it, that plan could get de-railed (at the RNC),” Ritchie said. “But the chairs of the rules committees of both parties are calling for primaries and caucuses to be held on later dates.”

The GOP’s rules committee isn’t the only body looking at change.

State legislators in many states, including Minnesota, will be pushing for changes in coming months, as will party leaders.

“Right now, we need to focus on Nov. 4,” said Brian Melendez, chairman of the Minnesota DFL.  “But after the election. …”

Melendez believes the DFL’s executive committee will start looking at reforms in earnest next February. He believes the state Legislature will be working even more quickly than the state party to change the nominating process in Minnesota.

It’s possible that four years from now, Minnesotans will be dealing with a vastly different system than last February’s caucus system, which was chaos on the DFL side because of record crowds showing up at sites around the state.

Best guess now is that Minnesota will go to a presidential primary but keep its caucus system to determine delegate support for people seeking other offices.

But even if it were a primary, Melendez said the big issues that each of the parties would tussle with is whether those primary results are binding, or whether they’re merely “advisory” for the parties.

Clearly, though, Melendez has not forgotten the long lines, the overflowing parking lots and the scraps of paper being used as “official” ballots because the numbers of people overwhelmed the system.

Although the state’s GOP has expressed less concern about the caucus system, typically the DFL and state Republicans have been able to come to general agreement on how the nominating processes should work.

What of a massive, federal change? That will be more complex, most agree.

“A lot of people like me are pushing for the party to make change,” said Nancy Larson, a member of the Democratic National Committee and a Minnesota superdelegate at the convention here.

Larson, you may recall, was at the center of a media storm earlier this year when she remained “uncommitted” while both Hillary Rodham Clinton and Obama were scouring the country, seeking every single delegate they could find.

Larson didn’t mind the steady diet of media calls, as well as the personal calls she received from each member of the Clinton family and from Michele Obama.

“Actually loved it,” she admitted. “I thought it was a good opportunity for people to see that real people were involved in the process. Here I was, this woman from rural Minnesota. Many of us in the DNC are just people. We don’t have money. We don’t have power. We just care.”

On the other hand, Larson also expressed concern about the perception that superdelegates hold too much power in the party. Change needs to happen, she said, but it will be very difficult.

“When you get right down to it, people talk about how they want change, but most really don’t like change,” she said. “They end up saying, ‘Oh, the system we have isn’t perfect, but at least we understand it.’ ”

She thinks it likely will take federal legislation to get the parties to make moves that might help clean up the messes that were such big news only a few months ago.