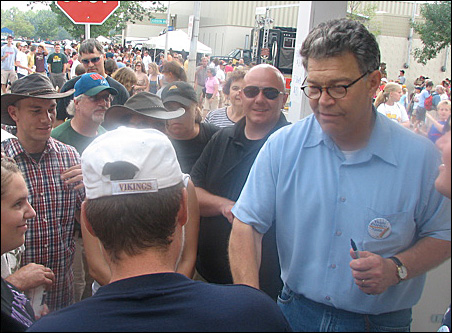 Today’s warm August weather, with a hint of a breeze, brought Sen. Norm Coleman and Al Franken and tens of thousands of other Minnesotans to the State Fair for opening day.

Coleman worked his booth, near the Food Building, a bit in the morning, but I missed him. Franken posed for pictures and signed autographs in the early afternoon, as a large crowd lingered at his booth near the Haunted House.

We’ll return for more on the campaigns at the Fair on another day.

Today, I’ve got to report that we tried the hot new, media-favorite food of the Fair. Chocoate-covered bacon; $5 at Famous Dave’s, just west of the Grandstand. If I didn’t have a professional duty to check these things out, there’s no way I’d try such a thing, but I take this job seriously, so…

The verdict: not bad. Dark chocolate, thick, lean bacon, a hint of sea salt. So I went looking for the inventor: Charlie Torgerson, who runs the Famous Dave’s at the Fair, along with four others around the state. 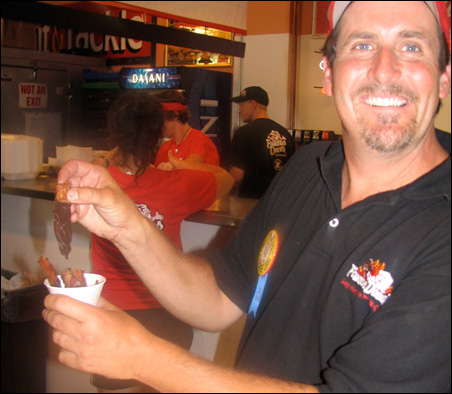 Last spring, he and partner Randy Jernberg tried a chocolate Easter bunny with bacon inside, he said. They wondered if that might be something they could try for this year’s Fair. They’ve been  trying to come up with new items each year: Last year, it was a (pork) Knuckle Sandwich and Kool-Aid pickles.

“I went home that night and started messing around in the kitchen, and the next day I called Randy to say, ‘It works.’ “

They use Nueske applewood-smoked slab bacon from Wisconsin — Torgerson said everyone has heard about it; I hadn’t — and dark chocolate from Chocolate Celeste of St. Paul — which I have heard of. Togerson said he got the trademark approval for the product, which they call “Pig Lickers,” this morning.

A steady flow of people lined up to buy it and left satisfied. So ya never know.

• Aquafresh toothpaste is handing out samples on Machinery Hill and offering toothbrushes, sinks and water if you want to brush your teeth at the fair — maybe a good idea after the chocolate-covered bacon.

• The thing everyone wants to know: When and where can you get the cool-looking, and Fairly useful, purple bags? They’re from the University of St. Thomas, which has a booth in the Education Building. Each day, the school is distributing about 8,000 bags, handing them out 2,000 at a time, four times a day — at 9 a.m. and 1, 4 and 7 p.m.

• Some of the State Fair police officers are sporting neat new badges, noting the Fair’s 150th  anniversary this year. I spotted Caroline Lowe wearing one. She’s the longtime WCCO-TV reporter who’s also a licensed police officer who works at the State Fair each summer.