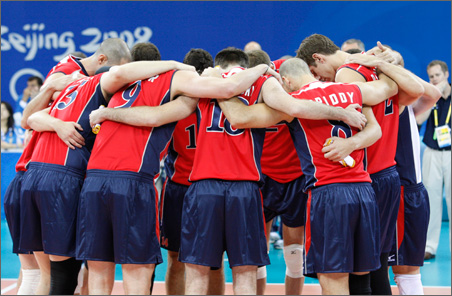 REUTERS/Oleg Popov
With their coach tending to family matters, members of the U.S. men’s volleyball team observe a moment of silence before their first match.

BEIJING — He is a coach. That was obvious.

Before he addressed the journalists sitting around the conference table, U.S. Olympic men’s volleyball coach Hugh McCutcheon grabbed a pen and drew a chart. He placed each reporter’s name at his or her spot on his little map.

He is a son-in-law, a husband. That’s clear, too. He is the face and voice of the Bachman family in China for now.

His father-in-law, Todd Bachman, was murdered Saturday while touring a Beijing landmark. His mother-in-law, Barbara Bachman, remained in a Beijing hospital, her condition upgraded Monday from critical to serious, but stable.

Monday night Beijing time, in a hotel meeting room, McCutcheon decided to chat with reporters, to thank a host of agencies — from the White House to the Chinese Foreign Ministry — that have been helping the Bachman family since the awful events of Saturday at the Drum Tower and to detail what he knew about the incident.

McCutcheon and USOC spokesman Darryl Seibel reiterated that Chinese law enforcement officials have determined the attack on the Bachmans was, as Seibel put it, “not premeditated, not specific and not targeted.”

But it was “tragic and senseless,” said McCutcheon, 39, a somber, native New Zealander.

“It’s hard to sum up Todd in an anecdote,” he said. “This is a man of great personal integrity … He was a great father, a loving husband. He had a very good sense of humor, very compassionate, very caring, very philanthropic. It’s just hard to imagine a nicer person than this tragic and senseless event could happen to.”

The last time they communicated was Friday night, fewer than 14 hours before the assault. Todd Bachman, CEO of Bachman’s, the Twin Cities floral and gardening company, text-messaged McCutcheon during Opening Ceremonies. The Bachmans were in the stadium. They’d seen him walking with the U.S. delegation.

“They were happy to be able to share in such a wonderful event,” is what McCutcheon remembered of the message. 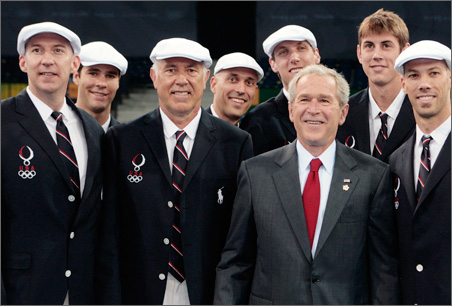 REUTERS/Larry Downing
President Bush posed Friday with members of the U.S. men’s volleyball team in Beijing. Coach Hugh McCutcheon is at the left.

The Bachmans’ daughter, Elisabeth, had been a 2004 volleyball Olympian. Now her husband of two years was going to coach the U.S. team, a strong team, a medal-contending team. It was a family event of the highest order.

Then Saturday came. McCutcheon was in a practice with his team. The men had just won the World League, an international circuit. The team was peaking at the right time for the Olympics. Many were giving McCutcheon credit.

“I received a message that Elisabeth needed to get in touch with me, and I called her on my cell phone,” he said. “She was still at the site.”

He went on: “She told me right away what had happened. I obviously couldn’t put all the pieces together, but I knew there was a violent incident and Todd was the victim and Barb was hurt as well.”

He bolted from the gym. An Olympic committee car dispatched him to the Drum Tower.

“It was a case, unfortunately, of wrong place, wrong time,” the coach said.

McCutcheon said that during the guided tour, as far as he knew, no one in the Bachman family had any contact with the assailant.

“To my knowledge, it was not a drawn-out event, ” he said. “I think it happened quite quickly, and I don’t think there was anything said.”

Barbara Bachman hasn’t been able to communicate well enough to describe the details, he said.

McCutcheon’s interview came on the same day the China Daily, the official English language newspaper, reported that Chinese President Hu Jintao apologized to President Bush for the attack. Hu instructed the Chinese Health Minister to visit Barbara Bachman in the hospital “to ensure she got the best treatment.”

“Her improvement has been steady,” McCutcheon said of Barbara Bachman. “Her injuries were significant. But the surgical team at the Chinese hospital has done a marvelous job of repairing the wounds and giving her the best possible chance of recovery.”

There were others who were hurt. The tour guide of the group that the Bachmans were a part of was injured, too, condition unknown. Elisabeth “Wiz” Bachman, the former great Minnesota high school volleyball player, was there when the attack occurred.

“Clearly Elisabeth is a victim in this as well,” said her husband. “She physically is unscathed, but having to deal with this event has been hard for her. She’s shown incredible strength … A lot of tears and a lot of hugs.”

As for him, the son-in-law, the husband, “For me, personally, anger isn’t an emotion I’m allowing myself to indulge in.”

“Volleyball is my job, and family is my life,” he said. “So that distinction has been very easy for me.”

Funeral arrangements for Todd Bachman have still not been made. The length of Barb Bachman’s stay in the hospital remains uncertain. An investigation continues.

Priorities clear for Olympic coach and Bachman son-in-law: ‘Volleyball is my job, and family is my life’