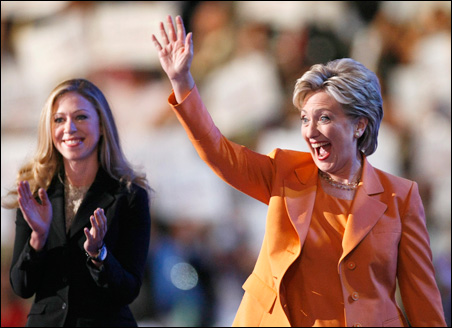 With a compelling pitch for party unity, Hillary Rodham Clinton symbolically ended a campaign that won’t die easily for women who supported the New York senator’s bid to be president.

Clinton poured on the pressure on the second night of the Democratic National Convention in Denver to turn those women toward her former rival in the Democratic primaries, Sen. Barack Obama.

“It is time to take back the country we love, and whether you voted for me or you voted for Barack, the time is now to unite as a single party with a single purpose,” Clinton said. “We are on the same team and nobody can afford to sit on the sidelines. This is a fight for the future and it’s a fight we must win together.”

She challenged her supporters, “I want you to ask yourselves, were you in this campaign just for me?” and reminded them of the single mothers and many others who have a stake in the election.

Without detracting from the spirit of Clinton’s rousing speech, set aside for a minute the question of whether women who had thrown themselves into Clinton’s bid for president should now vote for Obama.

Consider instead, as a stand-alone issue, the question Minnesota Sen. Tarryl Clark posed to MinnPost’s Doug Grow in Denver. Even while Clark predicted Hillary voters will get behind Obama, she said the question lingers: “Will there be another opportunity in our lifetimes?”

Your chances of seeing a woman command the Oval Office depend, of course, on how old you are.

But, by several measures, the short-term prospects are bleak.

While Americans believe that women have the right stuff to be leaders — honesty, intelligence, and other valued character traits — 21 percent still said that men make the better leaders, according to a Pew Research Center Social and Demographic Trends survey.

Embedded biases
Even though 69 percent said men and women would make equally good leaders, there is a paradox embedded in the survey’s findings, and it “is part of a wider paradox in modern society on the subject of gender and leadership,” the Pew report said.

“In an era when women have made sweeping strides in educational attainment and workforce participation, relatively few have made the journey all the way to the highest levels of political or corporate leadership,” the poll report said.

Why not? In the survey, people cited gender discrimination, resistance to change and a self-serving “old boys club” as reasons for the relative scarcity of women at the top. In somewhat smaller numbers, they also said that women’s family responsibilities and their shortage of experience hold them back from the upper ranks of politics and business.

By another measure, psychologists who have studied gender attitudes and voting behavior would not be surprised by Pew’s findings.

Gender biases residing in the deepest recesses of our minds can be even more difficult to overcome than racial bias, according to research at the University of Chicago and Harvard University, which was reported during the primary campaigns by New York Times columnist Nicholas Kristof.

“The challenge for women competing in politics or business is less misogyny than unconscious sexism: Americans don’t hate women, but they do frequently stereotype them as warm and friendly, creating a mismatch with the stereotype we hold of leaders as tough and strong,” Kirstof said.

In other words, voters may not be aware of the true reasons they feel that a woman is not the right person for an elected office.

“Many experiments have found that women have trouble being perceived as both nice and competent,” Kristof said.

The research helps explain why the history of women’s suffrage has been a story of fits and starts.

Of course, women and men acting in the pitched political battle that is a presidential race can’t set aside the question of whether Clinton supporters should back Obama.

Dealing with lost hopes
But the decision clearly was agonizing for some delegates who watched Clinton’s speech Tuesday night. Their faces reflected the lost hopes of the throngs of women who flocked to her campaign events, who endured the “Iron my Shirt” posters and held up their daughters so those girls could watch the historic realization of a dream.

But there was little hint at the speakers’ podium of the frustration that U.S. Rep. Carolyn Maloney of New York expressed in her new book, “Rumors of Our Progress Have Been Greatly Exaggerated.”

And it remained for pollsters to tease out the lingering resentment. A CNN/Opinion Research Corp. poll taken Aug. 23-24 found that Obama’s support from Clinton loyalists was just 66 percent, down from 75 percent in late June. Twenty-seven percent said they would support Sen. John McCain, Obama’s Republican rival, up from 16 percent in June.

A poll is a snapshot in time, though. Obama’s high-stakes bet is that the convention will turn some of those holdouts to his side.

Clinton contributed her part to that cause, bubbling with optimism about women’s prospects: “If we can blast 50 women into space we will someday launch a woman into the White House,” she said in a film introduction to her convention appearance.

In portions of her speech that were targeted at disappointed women, she said, “in America you always keep going. … We don’t have a moment to lose or a vote to spare.”

And she took jabs, on Obama’s behalf, at McCain, tying him to the unpopularity of President Bush.

“It makes perfect sense that George Bush and John McCain will be together next week in the Twin Cities because these days they’re awfully hard to tell apart,” Clinton said.

After Clinton’s speech, Rep. Michele Bachmann, R-Minn., said on CNN’s Larry King Live that the Democrats are split into the “party of Hillary Clinton and the party of Barack Obama.” Obama has failed to bring the two together, she said.

“Barack Obama hasn’t even closed the sale yet with 30 percent of Democrats,” Bachmann said.

The Democrat’s vice-presidential candidate Joe Biden pushed hard to win the women’s vote on Tuesday, reminding working mothers at a roundtable in Denver that the next president might have the chance to fill as many as three Supreme Court vacancies, Reuters reported.

“It’s not merely the woman’s right to choose (to have an abortion) which is at stake,” Biden told a mostly female crowd of several hundred people.

The Supreme Court issue, by itself, will be enough to get “most upscale feminists on board,” predicted Peter Canellos, Washington Bureau chief for the Boston Globe.

“But Obama will have to work a little harder to win over the working-class women who saw something of themselves in Hillary Clinton,” he said.