LONDON — Chalk it up to basic economics of supply and demand.

Americans are driving less, and the price of gas keeps falling — 25 cents or so. The national average for a regular gallon of gas — at $3.86 — is still more than a dollar higher than it was this time last year.

But that’s nothin’ compared to what they’re paying across the pond.

I took this picture (below right) at a petrol station while in London about 10 days ago. At first glance the price appears to be $1.18 a gallon. 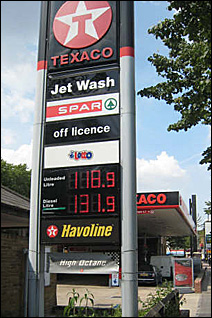 “It’s ridiculous,” said Liz Domingua, a young Brit I talked with briefly while she was filling up her tank.

“I don’t even use my car that much anymore. I just walk everywhere. I’m only using it today because it’s the weekend,” she said.

On average, British motorists reportedly shell out 67 pounds every time they fill up. That’s $134 (U.S.) per tank.

And you thought we had it bad.

“I think the economy is shot to pieces on both sides,” said Domingua. “It doesn’t really make any difference. The cost of living is much higher here, I think, than it is in America. And the pound being strong, you see that. It’s very evident. But really, I think it’s down to each side to try and find a solution.”

Slow going
According to British news reports, one solution involves simply slowing down.

Cars, trains, ferries, buses and even planes have been ordered to go slow in order to conserve energy.

One of Britain’s biggest budget airlines, EasyJet, for example, cut flying speeds — by up to 2 percent — on some routes. Another air carrier BMI, dropped its average flight speed by (a paltry) 3 mph.

Drivers on Britain’s TransPennine Express train service have been asked to cut their engines and coast downhill.

The Guardian quoted an executive at a U.K. rail franchise who said: “There’s a hell of a lot going on. Life has changed, we’re working very hard — we’ve got to.”

Similarities vs. differences
Earlier this summer as the price of oil began to drop from its record high of  $147 a barrel, three of Britain’s biggest supermarket chains began passing those savings onto shoppers by cutting the price of petrol by as much as 5 pence per liter, for those customers who spent at least 50 pounds in the store.

Sound familiar? I think I still have some of those Rainbow or Cub coupons lying around somewhere.

Yet for all our similarities, there are differences too.

“Americans tend to be quite insular in their view of the world,” said Mal Fletcher, a broadcaster and social commentator who moved with his family to London from Australia four years ago. “The only comparisons [Americans] can make are on the basis of their own experience as far as a year ago or on the basis of someone who lives an hour away by plane. Where as in Europe nations border nations, and so you’re constantly comparing yourself. If you live in Denmark you’re comparing prices in Germany or France. It’s just part of life.”

“More than half the money I pay at the petrol pump (over 60 percent) is for taxes and duty,” said Fletcher. “Actually only 32 percent when its unleaded petrol is for the product itself.”

By comparison, as of July 2008 the average gas tax in the United States was 49.4 cents per gallon.

Fletcher says Britain’s higher taxes have only intensified the grumbling in London over the petrol prices, even though Europeans may recognize the benefits those taxes bring … namely in the form of public transportation.

“We’re from Australia,” said Fletcher, “so we have the same heritage you do in America … public transport in Australia is nothing like it is here. We lived in Denmark for 10 years and that’s an even better example of public transport at its best. You get the clean trains on time all the time, buses that will take you anywhere pretty much. Cabs cost more; most people were content to use buses. We were paying 60 percent of our income in tax, plus 25 percent VAT on everything we bought. So you get what you pay for.”

While in London, I noticed that the iconic red double-decker buses appeared with all the frequency of pigeons in Hyde Park. And it was pretty easy to catch a black taxi, although traffic was a nightmare no matter what time of the day. A ride from our hotel to a local restaurant for lunch should have taken 20 minutes, but took an hour and half in stop-and-go traffic at 11:30 in the morning.

Underground, though, crowds of commuters made their way on foot through curved tunnels to catch one of London’s famed trains. They fill to capacity within minutes of arriving at the loading platforms and stop briefly for boarders who seem to fill every seat and cling to every rail as the trains rattle off in the darkness to the next tube stop.

To and fro
There were lots of Europeans going lots of places, by one means or another. I asked Mal Fletcher if he thought Americans might need to rethink the way we get to and fro.

“It’s the opinion of only an occasional visitor,” he said, ” but I think the new generation of America is much more aware ecologically than their predecessors, and I think there is an entrepreneurship in America that will drive the development of new fuel sources, new types of cars. When it comes to the environment, I think we’re yet to see the power of America to change it through sheer inventiveness. The same people who invented the Chevrolet can reinvent the car with that same pioneer spirit, with that same can-do attitude. Some of that is happening in Europe, but I’m looking forward to seeing it happen more in America.”

In the meantime, as the slight decline in gas prices is tempered by cautious analysis, and characterized as a trend that could potentially be reversed, London resident Liz Domingua may have summed it up best for both of us.

“We just have to try to live with it and try to make it work. It’s tough.”

Reality check: Gas costs $9 per gallon across the pond