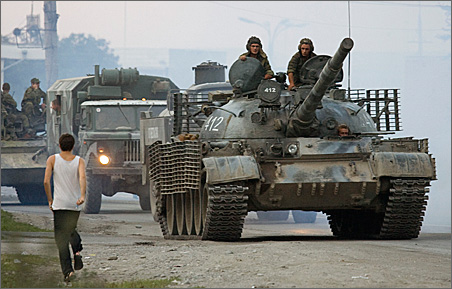 Images of Russian tanks rolling on the offensive trigger a relapse of Cold War shivers for several sobering reasons.

Not since the Soviets invaded Afghanistan in 1979 has the world seen Russian troops as brazenly engaged in battle outside their own borders as they were over the weekend in Georgia, their relatively tiny neighbor to the south.

But Russian forces continued their attacks, and they hit well beyond the two separatist provinces that Russia claimed to be defending. Georgia’s move to suppress separatists in one of the provinces, South Ossetia, sparked the fighting on Friday.

South Ossetia has strong historic ties to Russia, and the Kremlin claimed initially that it was aiding its friends in the province. But leaders in Washington and Europe said Russia’s bloody invasion of Georgia was a display of naked aggression. Even after Georgia begged for a cease-fire on Sunday, Russian artillery and planes pounded targets deep into Georgia.

There are many reasons Moscow may have wanted to punish Georgia and its president, Mikheil Saakashvili. He had made a bid for NATO membership, and he enthusiastically supported the Bush administration. The United States has trained Georgia’s troops.

Whether or not oil and gas was another motive for Russia’s massive attack on Georgia, it is a worrisome aspect that will linger even after the clash cools down.

A crucial question as financial markets reopen today is how the bear market already gnawing at Wall Street will react to the roaring of the Russian bear half a world away. If the Georgian conflict reverses last week’s oil price decline, the fallout from the fighting will hit our neighborhood gas pumps — and our 401(k) accounts, too.

Oil already has moved higher in markets around the world today in response to the conflict, the Associated Press reported.

Major oil pipeline
Although the mountainous republic of Georgia has a population smaller than Minnesota’s, its position as an east-west corridor gives it strategic significance far beyond its size.

While Georgia doesn’t produce oil itself, it hosts a 155-mile link of the world’s second largest oil pipeline — the Baku-Tbilisi-Ceyhan pipeline — which carries oil from Azerbaijan on the shores of the Caspian Sea to Western markets.

The BTC oil pipeline, backed by U.S. and European companies, was deliberately designed to bypass Russia and loosen Moscow’s control over oil and gas exports from the Caspian region. Since 2006, it has brought a new source of high-quality oil into the Mediterranean to compete with Russian supplies.

Other oil-rich countries in the region also were building terminals and railway routes in pro-Western Georgia, in a bid to market their products free of Russian influence.

Reasons to bypass Russia
Russia’s vast natural reserves had allowed it to position itself as a rival to Middle Eastern nations in supplying energy to the West, the Telegraph of London reported.

However, its hostility to western oil companies such as BP and Shell spurred Europe to look for alternatives, the Telegraph said.

Among other worries was that Moscow would use its control over oil and gas spigots as an economic and political weapon. “Russia demonstrated its might in January 2006 when it cut off gas supplies to Ukraine after a dispute over costs,” the Telegraph said.

Oil and gas have been major factors in Russia’s recent economic rebound from near bankruptcy a decade ago, the New York Times reported.

“The combination of Vladimir Putin’s reforms and the dizzying rise in the price of oil and gas have rapidly restored Russia to the status of world power,” the Times said. “And Mr. Putin has harnessed that power in the service of aggressive nationalism.”

Petrostate
Marshall Goldman, a leading Russia scholar, argues in a recent book that Putin has established a “petrostate,” in which oil and gas are strategically deployed as punishments, rewards and threats, the Times noted.

But Georgia weakened that strategy with its oil pipeline. Even more threatening was the prospect that it would become a major conduit for natural gas.

Goldman’s book, “Petrostate: Putin, Power and the New Russia,” details the lengths to which Putin has gone to retain control over the delivery of natural gas from Central Asia to the West.

In a talk last month for the Carnegie Council, Goldman described a visit to the Moscow headquarters of Gazprom, the largest company in Russia and the largest natural gas producer in the world. Formerly it was the Soviet Ministry of the Gas Industry and now it is a state-dominated joint stock company, he said.

“In front of me, covering the whole 100-foot wall of the room, was a map with a spider web-like maze of natural gas pipelines reaching from east Siberia west to the Atlantic Ocean, and from the Arctic Ocean south to the Caspian and Black Seas,” Goldman said. “Manipulating this display, with all the lights blinking and the gas moving, were Gazprom dispatchers, three men controlling the flow of Gazprom’s gas to east and west European consumers of this Russian natural gas monopoly.”

With the flick of a switch, he said, “those dispatchers sitting in the Moscow room could freeze — and, indeed, have frozen — entire countries.”

Russia’s assault on Georgia delivered a powerful warning that it would be risky to sink any investment into new gas pipelines bypassing Russia.

“If Georgia collapses in turmoil,” Goldman told the Times, “investors will not put up the money for a bypass pipeline.”

Scaring the markets
Observers said that Russia already has disrupted oil and gas flow through Georgia over the weekend.

“The explosion of violence between Georgia and huge northern neighbor is threatening  … the Baku-Tbilisi-Ceyhan pipeline,” AFP  reported.

The pipeline had been out of action before the Russia-Georgia conflict erupted because of an explosion in eastern Turkey for which Kurdish separatists claimed responsibility.

In the short term, such disruptions are unlikely to scare oil markets, Paul Stevens, an oil analyst with the Chatham House told AFP.

The deeper worry is over Russia’s true intention in Georgia and the larger region.

“The force of Russia’s attack against Georgia this weekend sends a strong signal that Moscow is determined not to relinquish control over the oil-rich Caspian region,” the Financial Times of London reported.

Kaan Nazli, the director of emerging markets at Medley Global Advisors, told the Financial Times that prolongation of military hostilities would “deal a devastating blow to prospects of maintaining a safe non-Russian route for Caspian and central Asian oil and gas.”

Other analysts said that Russia would hesitate to risk upsetting relations with its oil-rich Caspian neighbors by directly attacking Georgian energy export facilities.

More likely is that the conflict could rock confidence in Georgia’s security and thereby deter Caspian oil and gas producers from committing their oil and gas exports to routes across Georgia.

Coming in Russia: the ventriloquist and the dummy
By Steve Berg
February 29, 2008

Putin picks a Putin man as his successor
By David Brauer
December 10, 2007

New era in space travel begins — and the U.S. is on the sidelines
By Sharon Schmickle
April 2, 2008