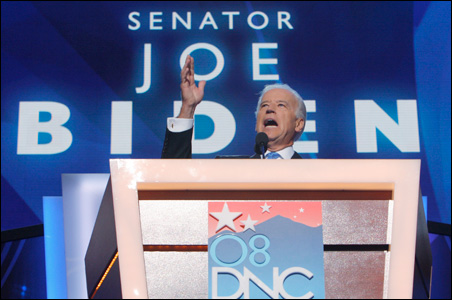 DENVER — It was approaching midnight, and the two Minnesota labor guys from Carlton County were sitting out in front of the suburban Sheraton Hotel.

Most of the other members of the Minnesota delegation had gone to bed after another 13-hour day of speeches and convention business.

But every night, Sundin and Anderson have had stuff to talk about.

“There was a quiet part in Biden’s speech,” said Anderson, who is an alternate delegate and therefore was seated high up in the Pepsi Center Arena. “Just at that quiet part, I said, ‘This is a great speech! This is so un-Dick Cheney like.’ I didn’t mean for everybody around me to hear it. But it came out just at that quiet spot. People around me started cheering. They liked that.”

The two laughed and sipped.

Cynical about national political conventions? Turn off the sounds of the TV pundits and spend a little time with delegates.

Doing the right thing
Most of the Minnesota delegates are neither rich nor powerful. They’ve come here at considerable expense.

“You sure don’t do it for the fame or the power,” said Sundin. “You do it because it’s the right thing.”

This is the first national convention for the two members of the Labors International Union of North America. It’s exceeded their expectations.

“The speeches,” said Sundin. “There’s been some great ones.”

But consider, these delegates start listening to political speeches at a 7 a.m. breakfast and keep listening into the night, with a break for caucus meetings, where more speeches are delivered.  On average, delegates must listen to 50 speeches a day. Mercifully, most of them are short.

Aren’t there more bad speeches than good ones?

“Not really,” said Sundin. “There’s only been one real bad one. It was this old guy who had been a speechwriter for John Kennedy. I think the speech he had written was OK, but his delivery was terrible.  Just because you can write a play, doesn’t mean you can act.”

Most of what you see on TV – when it’s not the bloviating pundits – is highly scripted.

Delegates are shown only if they’re in funny clothes or cheering wildly.

Anderson does love the cheering.

“I’m one of those Ed McMahon, hi-yo guys,” he said. “I was sitting (in the alternate cheap seats) with some people from Maine and Florida. I was giving the big ‘hi-yo’ for all these speeches and the people around me loved it. So here I was, teaching people the hi-yo.”

Again, look to Sundin and Anderson.

“You know what he’s doing when we get back?” said Sundin. “He’s donating his kidney to his neighbor.” ‘

“My wife says she hopes they take the crabby kidney,” said Anderson, downplaying his sacrifice.

“You know why he’s doing it?” said Sundin. “It’s because he doesn’t have a lawn mower. He’s always borrowing his neighbor’s mower.  If something happens to that guy, he’s going to have to buy his own lawn mower, a goat, or something.”

Back and forth they go. Constant banner.

Yet, they’re serious about politics.  Both are longtime DFL activists. Sundin’s the chairman of the county DFL; Anderson’s the director.

“You know which county had the highest percentage vote in the state four years ago?” asked Sundin.

“You got it,” said Sundin. “Guess the percentage.”

“And we didn’t even have to cheat,” said Anderson. “Same-day voter registration. We got 103 per cent. You can look it up.”

Sometimes, the banter stops and they get very serious about their politics – especially the war.

These two labor guys, who don hard hats every day, hate the war and what it’s costing at every level.

“You see those flag-draped coffins and it gets to you,” said Anderson.

“It’s personal for me,” said Sundin, whose son headed for his third tour in Iraq in April.

His son has volunteered for two of the tours.

“It’s this sense of duty he has,” said Sundin. “I went up to Amy (Klobuchar) today and told her, ‘I can’t stop him from going, but you can. Get this thing over by April.’ They make a big thing of McCain having been a POW. He did his duty. That’s good. But now, we’re all POWs of this war. We don’t have health care. Our education system is falling apart. Every person privileged to be born in this country now starts life with a $25,000 debt to pay for this war. We’re POWs.”

“The average Joe doesn’t get it,” said Anderson.

On into the night they went. Talking about the day’s events — and wondering why so many don’t seem to care.