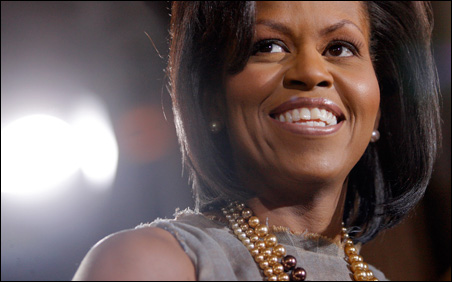 DENVER — When Michelle Obama showed up on “The View” in June wearing a spunky black-and-white frock, it upped her mainstream style quotient immeasurably. The dress was not tailor-made for her  5-foot-11 frame. She bought it, apparently, in a store, and it wasn’t expensive. Word is it cost $148 at the clothier White House Black Market. Women quickly figured out that they, too, could look like Michelle Obama.

So they went out and bought it. So many women loved the design, in fact, it took the clothier by surprise. The dress flew out of stores. But apparently, it’s back on the rack, and the line is marketing the Obama connection. (Buy it Now!)

So, what are we to make of this Michelle Obama style mystique? It’s not just about the way she dresses. Though it helped. Hillary Rodham Clinton’s self-described “sisterhood of the traveling pantsuit” probably wouldn’t have caught on even if Clinton had made it to the White House.

No, there’s something else about the Harvard Law School graduate that women like, and her Monday speech added to the charisma of Michelle Obama, who since 2005 has served as vice president of community and external affairs at the University of Chicago Hospitals.

Vanity Fair, that scion of style, smarts and fashion, referred to her this way in an article from late last year:

“Regally tall, stunning, and city-chic …,” writes VF’s Leslie Bennetts, “she manages to look as down to earth as any other soccer mom and as glamorous as a model while instantly commanding respect, even before she starts to speak.”

Minnesota delegates have been noticing, too.

At a state delegation breakfast in Denver, delegate Kathryn Speer of Wabasha made the comparison that seems to be coming naturally to political watchers.

“I see her moving along just like Jackie Kennedy did,” says Speer. “She’s going to be strong in what she’s fighting for. When you heard her the other night, she’s concerned about family values. And those two little girls are going to be a hoot.”

That’s another comparison often made with the Kennedys. Should Barack Obama win the presidency, there’d be young kids in the White House.

Delegate and Obama supporter Lois Quam likes that a lot.

“A mother of young kids in the White House will be pretty neat,” says Quam. “It’s fun to watch her with her two daughters, and how carefully she’s trying to keep their life ordinary with piano and ballet while campaigning.

Quam (who said she’d just flown to Denver from Norway, where she gave a talk on clean energy) is herself a highly accomplished businesswoman, in addition to being a political wife (she’s married to Matt Entenza, the former state legislator and one-time candidate for attorney general) and the mother of three.

Quam says as first lady, Michelle Obama’s style and substance would equate to a strong role model for young women.

“I think Michelle Obama, by being so public, and being so clear and engaged with her kids, will give women the confidence that they can have families and really enjoy it and still be involved in public life one way or another,” says Quam. “I think in that way, she’s going to have a huge impact.”

Delegate and state Sen. Mee Moua, DFL-St. Paul, says since she’s been in the United States, she has witnessed a first lady in Hillary Clinton that has set an example. (Moua immigrated from Laos in 1978 and became the nation’s first Hmong-American elected to a state legislature.)

“When Clinton was first lady, it was never symbolic,” says Moua. “She took on some very consequential issues and made an impact. Clinton, in my lifetime, is the first young first lady who was a professional who brought that to the office.”

Moua, who came out for Barack Obama just before Super Tuesday, says she was very conflicted about whether to endorse Clinton or Obama. She says seeing Clinton’s speech Tuesday night gave her some peace of mind. Moua is fully behind the Obamas now, both Barack and Michelle.

“I’m not saying Michelle Obama as first lady should replace my hopes and aspirations to still have a woman president one day,” says Moua. “That being said, (Michelle) is going to bring that professional persona to that role, which is going to change the way my two daughters think about being a first lady because she’s a professional woman and an equal partner, and that will shape how the world is perceiving our presidency.”

Even though Michelle Obama has the gravitas to be first lady, the style- and celebrity-obsessed culture we live in means ongoing commentary about her hair, clothes and makeup will continue well into the fall election.

Her husband and kids are, of course, subject to the same vigilant commentary. An “Inside Edition” piece today on the Obama family’s convention style gushes about daughters Malia (10) and Natasha (7): “The Obama ladies simply sparkled.”

And should she become first lady, well, who knows what kinds of trends she’ll spark. Supermodels already want to be like her. Check out Tyra Banks in the September 2008 Harper’s Bazaar as she plays out her Michelle Obama fantasy.