Harding High School in St. Paul plays a big role in the upcoming novel “The Leper,” by Steve Thayer.

That seems appropriate because Thayer might be the only New York Times best-selling novelist to graduate from that landmark high school on St. Paul’s East Side.

He’s the author of several top-sellers, including “St. Mudd” and his mega-hit “The Weatherman.”

But because of its title and theme – a soldier returns from World War I to become a much-loved teacher at Harding, then is exiled when the symptoms emerge of the leprosy he contracted in the war – the new book wasn’t an easy sell, even for a best-selling novelist.

His agent wouldn’t submit the novel to publishing houses under that title, and even with another title it didn’t sell to the New York publishing crowd. 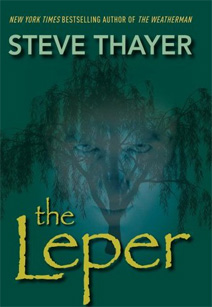 “The things I heard the most were:  ‘You can’t have a book with leper in the title,’ and ‘No one wants to read a book about a leper,’ ” he said.

Seventeen rejections later, Thayer shopped it himself and found a home with North Star Press in St. Cloud.

And they kept the title.

It’s a return, of sorts, for Thayer, who still lives in the Twin Cities. His first book, “St. Mudd,” was self-published in 1988. It was later picked up by a small press, and finally reprinted in paperback by Penguin in 1992. His next three books, “The Weatherman,” “Silent Snow” and “The Wheat Field” were best-sellers, but now he’s back with a regional press. If “the Leper” is successful in hardcover, he hopes to find a larger publisher to take the paperback rights.

Motivated by island of Molokai
It’s an unusual topic, that’s for sure. Thayer said he came up with the idea while vacationing in Maui with longtime girlfriend, Celeste Gervais. Their resort faced the island of Molokai, the well-known leper colony in Hawaii. So in 2005, he visited Molokai, took notes and got the settings and atmosphere all set for the book’s climactic scenes.

He also researched a leper sanctuary in Louisiana, where the middle of the book takes place.

The early pages deal with St. Paul; he says he didn’t need much research for that. His mother, Katherine Walker, attended the old Harding in the mid-1940s, but by the time Thayer, himself, was in school, a newer building had been built a few blocks east.

Having lived in the area, he drew on his memory for many of the details; his memory, and his mother’s yearbook.

Thayer said he did get back to Harding last year, when he taught creative writing at the school for a week.

“That part of St. Paul, around Third and Earl, hasn’t changed much over the years.”

His story about leprosy will surprise many.

“Leprosy has been curable since 1945; most people don’t know that,” Thayer said. “Most think it’s highly contagious, but in fact, it’s barely contagious. In fact, 95 percent of the population is immune, and couldn’t get it if they tried; the other 5 percent are only susceptible if they are exposed for a long period of time.”

The disease, although curable, preys on poverty, Thayer said. “It exists in places where people can’t get the medicine, or can’t afford it,” he said.

Thayer is getting good early buzz on the new book, included a starred review in Publisher’s Weekly:

“Who wants to read a novel about a leper? Anyone who wants to be enlightened, educated and entertained by bestseller Thayer’s (The Weatherman) unusual but awe-inspiring hero. After stumbling on a French-German leper village while serving as a marine captain during WWI, John Severson takes a healthy little girl to safety while his near-mutinous men are ordered to return to the front. After an inquiry ends favorably, Severson returns home to St. Paul, Minn., where he becomes a high school math teacher and is secretly engaged to his favorite student. His happiness shatters after a routine medical check identifies him as a leper. In the wake of the Spanish flu epidemic, this means forced quarantine at Louisiana’s Witch Tree leprosarium, which Thayer describes in disturbing and sometimes lurid detail. After escaping from Witch Tree, Severson winds up as the sheriff of Hawaii’s Molokai leper colony, a relentless crusader for Hansen’s disease sufferers, whose rights as U.S. citizens were too long compromised by fear. This book deserves a wide readership. (Sept.)”