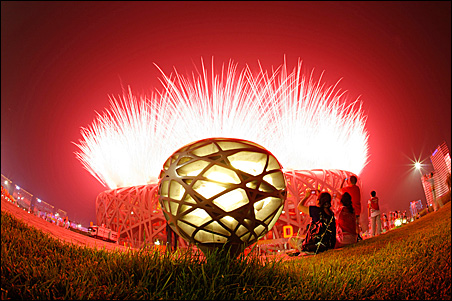 REUTERS/Tim Wimborne
Fireworks explode at Friday’s opening ceremonies of the Beijing 2008 Olympic Games at the National Stadium, also known as the Bird’s Nest.

As you read this, the Summer Olympics’ opening ceremonies will be taking place, 13 hours ahead of Minnesota time. As soon as I am able, I’ll write about the opening ceremonies and provide you a preview of what to watch on TV tonight.

BEIJING — As the Games are set to officially begin, a few short shots to think about…

The Summer Olympics are a big stage with global issues wrapped around local stories about the kid-next-door.

I have written in the past and will undoubtedly write in the future about this fundamental truth about the Games. They are a world event that is regularly reduced to hyperlocality. An athlete from your neighborhood seems to break through the cacophony of internationalism.

But this is ridiculous.

Before I left for China, and before he did, Micah Boyd and I chatted. He’s a member of the U.S. men’s eight rowing team, which begins its quest for a gold medal Sunday. 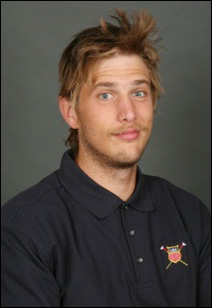 Normally, I write from St. Anthony Park neighborhood of St. Paul, the Twin Cities finest neighborhood, of course. Boyd, 25, grew up exactly three blocks from my home office. He played in the same Langford Park Little League as my sons.

He brings a great story this far: as a kid, Boyd was not a great athlete. His baseball teams never won. In high school, his twin brother, Anders, signed up with the Minnesota Boat Club in downtown St. Paul. Micah figured why not?

“Rowing ends tend to recruit the kids who weren’t any good in any other sport,” he said, bluntly. “It’s a very reject-oriented sport in high school in the Midwest.”

This “reject” went on to make the powerhouse University of Wisconsin-Madison rowing team and now the Olympic team. In the glamour men’s eight boat, Boyd will be sitting right next to Matt Schnobrich, also of St. Paul.

So there’s my kid-next-door story.

Now back to the world.

Flagbearer
Just Thursday I wrote about Dream for Darfur’s alternative opening ceremonies today. Ironically or fittingly, Lopez Lomong, who fled the brutal conditions of Sudan, carried the U.S. flag at today’s ceremonies. His is a great story and one that says much about the best of the United States. We are, generally, a welcoming nation.

Much has already been made nationally of the fact that Lomong’s selection by his U.S. teammates is a slap at the Chinese government and its policies in Darfur and support for Sudan’s president Omar al-Bashir.

And Friday morning, while hedging a bit on his opinion of China’s foreign policies, Lomong was outspoken about how U.S. Olympic speedskater and activist Joey Cheek had his visa revoked by the Chinese; Cheek helped organize a group called Team Darfur, athletes advocated for resolution of that situation.

“I’m disappointed for Joey Cheek,” Lomong said. “He’s supposed to be here. He’s an Olympian and he’s supposed to tell people about the situation that’s happened. I’m here as an athlete and I’m here to represent my country to the fullest. I’m here to be an ambassador of my country. I lived in that life before. That’s why I’m a member of Team Darfur because I was in that situation before and me coming here, I’m here to compete for my country. Again, the Olympics are supposed to bring people together. “

To its credit, the U.S. Olympic Committee seems excited about the selection, not embarrassed or nervous about reaction from Chinese organizers.

U.S. Olympic Committee Chairman Peter Ueberroth was asked if American athletes sent a message to the Chinese by voting for Lomong.

“Either way, it’s fine,” Ueberroth said. “This gentleman has earned the right to represent the United States of America.”

Minni-posts
We noted earlier this week that Gophers’ runner Ibrahim Kabia fell victim to an about-face by officials of the Sierra Leone Olympic Committee and won’t be here. But Minneapolitan Roman Cress, whose story we first broke here at MinnPost, has arrived in the Athletes’ Village here and says he’s in shape. He’ll run in the 100-meter race next Friday… The University of Minnesota Libraries will display materials from the Kautz Family YMCA Archives that chronicle the origins and development of the Olympics in the Far East. “Reaching for Gold: The YMCA and the Olympic Movement in China from 1895-1920” runs through Sept. 29 at the Elmer L. Andersen Library Gallery, 222 21st Ave. S., Minneapolis…We’ve written about Gophers swimmer Jillian Tyler, who is competing for Canada. Word comes from the “U” that former Gopher Mike Brown is also swimming for Canada…Other former Gopher athletes are here, too. Rasa Troup will be competing in the steeplechase for Lithuania’s track team. An All-American in cross country at Minnesota, Troup finished 18th at the world championships in 2005. Former All-American Barbora Spotakova (2002) won the javelin world championship in 2007 so will take a stab at an Olympic medal here.