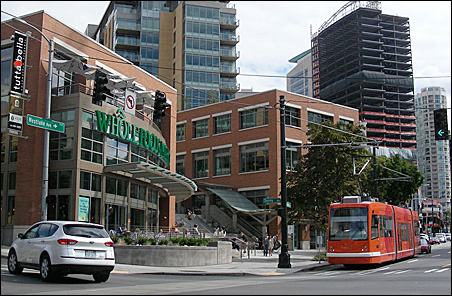 MinnPost photo by Steve Berg
A streetcar stops for grocers at a supermarket in Seattle’s booming South Lake Union District.

SEATTLE — Amy Gunnar opened her new Portage Bay Café last spring in a booming neighborhood just north of downtown for three reasons: a generous allowance from the developer, an assurance that local shops like hers won’t be pushed out by national chains, and the arrival of the Seattle Streetcar.

“It stops right at our corner and gives us tremendous visibility,” she told me after I had stopped by for lunch last Sunday. “We wouldn’t have come here without the streetcar.”

In less than a decade, a modern version of the streetcar has emerged as a hot development tool for cities wanting to retrofit their central districts in ways that match the lifestyle and business demands of the new century. The idea is to minimize the need for cars while allowing people to live, work and shop within a relatively small area. The tradeoff saves energy, improves air quality, alleviates traffic congestion and transforms neglected, underused land into healthy, lively communities.

Seattle opened its first line last December almost as a tribute to its down-coast neighbor, Portland, where nearly every urban innovation seems to originate. The Oregon city launched the modern streetcar trend in 2001, both to feed passengers to its extensive light-rail system and to catalyze redevelopment on the edges of its already successful downtown.

Line spurs real-estate, commercial development
In the years since then, 115 real-estate projects (PDF) — new construction and renovation — have popped up along the initial loop and its four extensions. Included are more than 10,000 new housing units and 5.4 million square feet of commercial space. Altogether, that represents a $3.5 billion investment — nearly all of it private — spurred by a $103 million capital outlay by the city.

That’s a return of at least $20 for every dollar invested. Not bad — and not a bad way to capture economic growth in a way that minimizes the impact on land, water and carbon emissions. Fifty-five percent of all development in central Portland has located within one block of the eight-mile streetcar loop since its route was first mapped in 1997.

“Our estimate is that one-third of that development would have happened without the streetcar,” said Charlie Hayes, vice president of the engineering firm HDR Inc., and a former Portland city commissioner who championed the streetcar revival.

Hayes’ comment came on Thursday at a briefing at the Minneapolis Club attended by city and business leaders and arranged by the 2010 Partners, a public/private group interested in redeveloping the area around the new Twins ballpark. Transit is key to their planning, especially considering the Crossroads Station adjoining the ballpark where most of the metro region’s rail transit lines are expected to intersect.

The starter segment will be part of one of seven long-range corridors already selected. (See map [PDF]). Six of them start downtown, running (1) down Hennepin to Uptown; (2) down Nicollet to 46th Street; (3) down Chicago to 38th Street; (4) up Washington and West Broadway to Robbinsdale; (5) up Hennepin to University Avenue, then east to the new Gophers football stadium, and (6) up Central Avenue to Columbia Heights. A seventh corridor runs alongside the Midtown Greenway bike trail in South Minneapolis.

Financing, as always, is the toughest problem. Hayes cautioned city officials not to expect federal help. Of the more than 30 cities with streetcar projects, only three are expected to get federal money before Congress passes the next transportation law, probably in 2010. Even then, a Republican administration could seriously stymie transit expansion by continuing to discount development in its funding formulas, Hayes said.

As for county or state support, forget about it; Minnesota’s laws are not geared up to provide incentives for urban-style, energy-saving development. That leaves a money-strapped city to find a “creative” solution on its own. A starter segment will cost perhaps $50 million or more to launch and $1.7 million a year to operate.

City may need several sources of funding
The obstacles are many. Modifying Minnesota’s strict tax increment financing (TIF) law would allow the city to borrow against future higher property values created by the streetcar within a specified district. That’s one idea similar to the Portland and Seattle models. Realistically, Minneapolis may have to cobble together a half-dozen sources — including property assessments and private sponsorships — to launch a first segment.

My trip last week to the bustling downtowns of Seattle and Vancouver, B.C. reminded me again how far behind downtown Minneapolis has fallen. Children must crawl before they walk and walk before they run. Minneapolis has yet to figure out how to keep its streets consistently clean or how to plant and care for the trees and other greenery that are now essential to the modern streetscape. To consider streetcars is, in a sense, to place the cart way before the horse.

Still, ambition is not a bad thing; cities must imagine the future they hope to achieve. The current housing pause offers a valuable moment to think ahead. If the city hopes to compete with close-in suburbs in attracting aging baby boomers and upscale young professionals, greener streets and alternatives to driving are the two big essentials.

In Minneapolis, streetcars would likely supplant buses on the highest-use routes close to downtown. Streetcars tend to attract 15 to 50 percent higher ridership than buses, and have demonstrated their power in attracting redevelopment. They are cleaner, quieter and designed to move in mixed traffic. Their capital costs run about half that of light rail, and they carry two to three times the load of buses.

Designed for compact central cities
They are designed, in other words, to fit into the compact central districts that cities hope to develop. As Mayor R.T. Rybak is fond of saying, Minneapolis developed as a streetcar city. Bringing them back is one way of restoring the cozy neighborhood feel of bygone days in a way that matches the need for a green future.

Seattle’s streetcar experiment is extraordinary in a number of ways. Although choked with auto traffic, the city has failed miserably to expand its transit system. Defeated ballot initiatives and major engineering problems delayed light rail for decades. A first line to the airport will finally open in mid 2009.

By contrast, streetcars came almost overnight. The first segment — a 2.6-mile loop — is part of a massive revamp of a neglected warehouse district by a single player — Microsoft co-founder Paul Allen. In 2006 Allen’s Vulcan Inc. began redeveloping a 60-acre stretch running north from Seattle’s busy downtown to the shores of Lake Union as a bio-medical research district. The aim is to add biotech to the city’s impressive business portfolio.

Rather than clear the whole area for new buildings, Vulcan intends to mix new structures with the best of the old and to emphasize local retail. Within two decades, the district hopes to fill 10 million square feet of office, retail, residential and laboratory space.  That would mean tens of thousands of new jobs and new residents. (Check out this video.)

Condo towers going up in Seattle
So far, so good. Even as the housing market slumps elsewhere, a dozen tower cranes surround Amy Gunnar’s new café on Terry Avenue. Most will be condo towers, although Amazon.com is building its four-block corporate headquarters just across the street, directly on the streetcar line. That means 4,000 potential additional diners for Gunnar and lots of vitality for the neighborhood.

“The future looks extremely bright,” she said. “We’re already making a profit and the growth has just begun.” The streetcar line will bring in more people when it expands, she said. Meanwhile, it provides residents a chance to slip downtown for shopping or jobs and an opportunity to stop for groceries on the way back. A new Whole Foods on the line was built by Milliken Developments, which plans a similar project for downtown Minneapolis.

The streetcar line, built in just 15 months, cost $52 million, half coming from adjacent property owners, half from local, state and federal funds. Seattle’s famously cranky neighborhood activists have christened the line “S.L.U.T.,” short for South Lake Union Trolley. “I don’t care what you call it,” Mayor Greg Nickels told them, “as long as you ride it.”