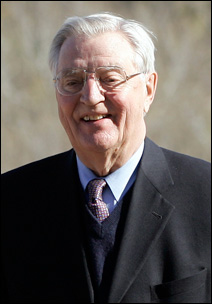 DENVER — Amazing who you can run into in the hallways of hotels in cities where political conventions are being held.

Take, for instance, the chance encounter Marcia Betker, a Minnesota alternate delegate to the Democratic National Convention, had in the headquarters hotel of the Minnesota delegation a few nights ago.

Betker and her husband, Mark, arrived in Denver Sunday. They were tired from their day of travel that had begun in Hutchinson but still attended a party Sunday evening for delegates from across the country.

They returned from the downtown event to the delegation hotel by bus and headed for their room. It was around 11:30 p.m.

“We showered, got on our pajamas and then I decided I needed a snack,” said Betker.

Since they had seen no one in the halls of the hotel a few minutes earlier, Betker figured she’d make a dash for the lobby shop.

She took the elevator to the lobby floor, took a look down the hallway and didn’t see a soul. So, she ventured out.

“Nobody around, except one person,” she said, shaking her head.

“Walter Mondale,” she said. “Here I am, no makeup, my pajamas, and the one person I come across in the hallway is the former vice president of the United States.”

Mondale, as always, was affable.

“Fine,” she said, horrified. And hustled on.

Time out for a Mondale digression:

Many politicians travel about this convention city with large entourages. They are treated as stars — and many of them seem as if that star treatment is their due.

Mondale mixing in with delegates from early morning to late evening
Mondale, 80, ambles around the Sheraton Four Points at all hours by himself. He joins the Minnesota delegates each morning for breakfast at 7 a.m. He listens to ALL the speeches.

In the evenings, after the convention business of the day is done, he’s frequently in the lobby. There are no entourages around him.  He joins small groups of delegates for discussions of things like Hillary Rodham Clinton’s speech. People come up, comfortably, and slap him on the back, and they exchange thoughts in everyday ways. He acts like just another delegate. (He is a superdelegate in the Minnesota group.)

Back to Betker. Blushing and embarrassed, Betker decided she might as well continue her journey for the snack. She made her purchase and started back toward her room.

Again, she saw no one in the long hallway back to the elevator. She breathed a sigh of relief.

“Hello,” she muttered and hustled off. “I’m sure he must think I’m this crazy woman who always runs around looking like that.”

Two days later, Betker had her photo taken with Mondale. She was dressed fashionably, as she usually is. Her hair was in place. Her makeup on.

Did she tell Mondale they had met under more casual circumstances?

“Of course not,” she said. “I was hoping he didn’t recognize me. If he did, he was polite enough not to say anything.”