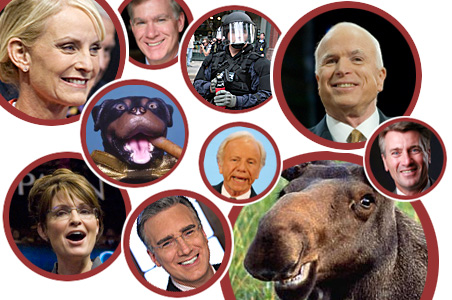 Two polls show John McCain getting an expected — if traditionally fleeting — nationwide lift from the Republican National Convention. (Then again, other polls show no bounce at all.) But what about everything else connected with the RNC? Who won? (Hint: It starts with a ‘P.’) Who lost? (Also starts with a ‘P.’) Who simply got bounced around? (Just about everyone else.) Here’s our completely unscientific, highly opinionated assessment of winners and losers.

Gov. Tim Pawlenty: Hockey guv gets trounced by hockey mom. Sorry, but we’re sure you’re not the first or last to be bitten by the Barracuda. LOSER

Gov. Sarah Palin: From nobody to somebody in the blink of an eye. But it really depends on that guy who’s actually running for president. The GOP’s answer to Hillary or this year’s Admiral Stockdale? Only time will tell. WINNER

Journalists: Old pros get detained, Chris Matthews and Keith Olbermann get demoted, nobody gets any news. LOSERS

Citizen journalists: Reams of footage online of protester/police clashes give the fullest picture of the only controversy to come out of the event. And, hey, nice home-made laminate! WINNERS

Barack Obama v. McCain: The senator from Illinois couldn’t get a single rebuttal heard above the din. The senator from Arizona is now considered safe, effective replacement for Lunesta. LOSERS

Free Speech: Protesters had to haggle for months just to get lousy parade routes and then got hammered if anyone stepped out of line. Journos equally flattened for daring to question Palin qualifications. LOSERS 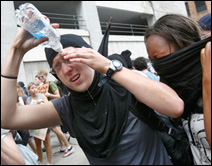 Riot gear, pepper-spray: Scary cop uniforms unveiled just in time for the fall fashion season, while it remains likely that no one has ever died from getting pepper-sprayed. WINNERS

Issues: At one point, Politico.com scanned the texts of all speeches and never found the word “Afghanistan.” Hey, wasn’t there a war over there once we were in? And: It’s the economy, stupid? Try getting a Republican to utter the word “deficit.” LOSERS

Conan’s friend, Triumph the Insult Comic Dog: The critter did the best job of peeling back the artifice of the convention itself, tweaking delegates and news celebs alike. Good for Gov. Pawlenty for addressing the hand puppet by its name and asking for a kiss on the cheek, but Triumph turned that into a less than iconic — but hilarious — moment by, er, mounting the guv’s shoulder. WINNER

Community organizers: The Republican leadership tries to smear Obama’s “experience” by sneering at something he did coming out of college more than 20 years ago — which Obama himself pointed out. The senator also noted that community organizing is where people turn when they feel their government has left them, but no one was listening: The GOP was too busy chuckling at any and all activists. LOSERS

West Seventh businesses: Aside from the CNN Grill, not much was happening on the restaurant-taverns side of the Xcel. Delegates and protesters on the downtown side couldn’t get over there! Next time, set up vending carts. LOSERS

CivicFest: Has cool scale replica of White House, and a real live Abe Lincoln roaming around. Sure, only 50,000 visitors all week out of a projected 150,000, but all the patriotism can salve any wounds. WINNER

CivicFest vendors: … Or maybe not. About 70 vendors plunked down $2,500 to have a booth at SnoreFest, and now it looks like many will get their money back. A week wasted. LOSERS

Ozzie Guillen: The Twins go 5-9 on a grueling two-week road trip to make way for the elephants at a crucial point in the season. Somewhere, the White Sox manager is laughing. WINNER 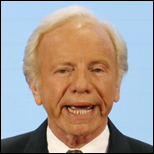 Joe Lieberman: Takes his own special brand of piety to new heights by crossing into enemy lines and then delivers a better speech for Republicans than the one he gave when he was running for vice president as a Democrat. LOSER

Twitter: Heretofore little-known latest improvement on the CB radio becomes the place to keep up on raids and arrests. WINNER

Grammar: Aside from the sub-literate Twittering, nearly every Republican delegate in town continues the annoying habit of referring to the “Democrat party,” which is supposed to be some kind of schoolyard taunt. “Democrat” is a noun; “Democratic” is the adjective you want, delegates. Seriously, look it up, then knock it off. LOSER

Drilling: Who knew thousands of Republicans chanting in favor of oil exploration could be so creepy? Still, the simple “Drill, baby, drill” message rules as the only “issue” that resonates outside the convention hall. WINNER

Bob Fletcher: The Ramsey County sheriff dominates headlines and shows his tough-on-crime bona fides with a series of raids before the convention and the protesting even started. Bonus: Displays buckets allegedly filled with urine, inadvertently turning a whole generation onto something called a “gray water system.” WINNER

Chris Coleman: Heretofore progressive-ish St. Paul mayor seen as getting in the tank with cops, Republicans, other fascists. Conservatives give props, but where will they be, come election time?  LOSER

Anarchists: Who knew there were so many disaffected youth? They seem to outnumber the Green Party — major-party status, anyone? Besides, press coverage for shadowy, paranoid ne’er-do-wells hits all-time high. On the other hand, breaking private property advances no cause, and listen up, children: If you’re against everything, then you stand for nothing. What kind of movement is that? A WASH

Minneapolis: It gets mistakenly name-dropped in early press coverage — even by the governor, for cryin’ out loud — and gets all the cool after-parties. Even better, it gets none of the blame for brutish police work, and none of the headache of cleaning up any mess. Even the Rage Against the Machine concert at Target Center was relatively mellow. (Bonus points to Mayor R.T. Rybak for laying low and staying unscathed.) WINNER

St. Paul: Prettier, nobler city gets the shaft: all the protest ruckus, all the dissing by national media on where the convention actually is, and a whole week where just about everyone, outside of cops and protesters, stayed away. St. Paul spends a week being the “crime” city, and gets nothing for its trouble but a reputation as some kind of war zone. Would you do it all over again? LOSER