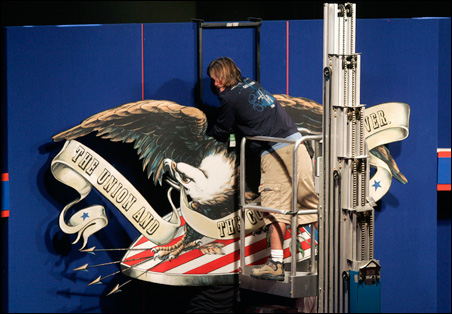 REUTERS/Jim Bourg
Despite Sen. John McCain’s call for a postponement, preparations continue for Friday’s scheduled debate at the University of Mississippi in Oxford, Miss.

What a day. One writer called Wednesday’s events “a daring duel of political brinkmanship” during “a compelling day of political bluff and counter-bluff.”

Sen. John McCain announced he was suspending his campaign to help negotiate the financial rescue package in Washington — and that he thought Friday’s debate with Sen. Barack Obama should be postponed. Obama said he thought the debate should go on; a joint statement was issued. Both were invited by President Bush to the White House, along with congressional leaders, to discuss the package. The day was capped with a TV appearance by Bush, explaining the origins of the financial crisis and appealing for quick congressional action.

The political and financial worlds are abuzz. Here’s a sampling of what observers are saying today:

And then there was Letterman.

Susan Albright, co-managing editor of MinnPost, can be reached at salbright [at] minnpost [dot] com.