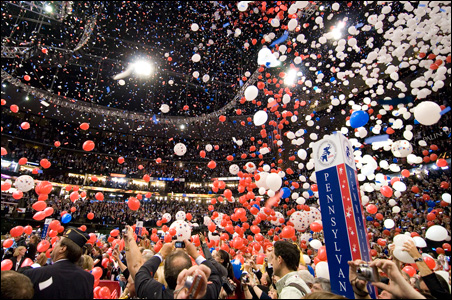 MinnPost photo by Bill Kelley
The speeches and celebrations are over, so it’s time to fact-check statements coming out of the GOP convention.

Political speeches are like TV commercials in that savvy listeners take what they hear with a good bit of skepticism. But voting is a far more serious responsibility than buying toothpaste. So let’s check some of the statements we’ve heard this week from the Republican National Convention in St. Paul.

We do so with the help of various news organizations: Factcheck.org, a nonpartisan service from the Annenberg Public Policy Center of the University of Pennsylvania, and PolitiFact.com, a project of the St. Petersburg Times and Congressional Quarterly.

“Senator Obama thinks we can achieve energy independence without more drilling and without more nuclear power.” – From McCain’s speech Thursday.

It’s true that Obama has staunchly and repeatedly opposed expanded offshore drilling in the past. However, just last month, Obama said he would accept some drilling as part of a compromise bill that enacts broader energy reforms.

The New Energy Reform Act of 2008 calls for spending $84-billion over 10 years on research and development of better batteries, fuels and energy-saving technologies and includes tax incentives for people who buy hybrid and alternative-fuel cars and trucks. But it also would allow drilling for oil and natural gas as close as 50 miles from Florida’s west coast.

But McCain’s claim that Obama’s plan does not call for more nuclear power is not accurate.

Obama has said that nuclear power “has to be part of our energy mix” in attaining energy independence, though it does require environmental safeguards. He’s also said that he hopes developing technology will provide better answers to the problem of nuclear waste storage.

“He was offered medical care for his injuries if he would give up military information in return. John McCain said, ‘No.’ ” — From Thompson’s speech Tuesday.

Thompson contradicted McCain’s own account in his autobiography, “Faith of My Fathers.” McCain had been gravely wounded when his Navy plane was shot down in 1967 in Vietnam.

At the camp POWs called the Hanoi Hilton, McCain initially refused his interrogators’ demands for information. But then, McCain recounts, he tried a different approach: “Desperate, I tried to bargain . . . ‘Take me to the hospital and I’ll give you the information you want.’ I didn’t intend to keep my word, reasoning that after my injuries had been treated, I would be strong enough to deal with the consequences of not holding up my end of the bargain.”

McCain also admits he eventually gave up information about his ship and Navy squadron. “I regret very much having done so,” he wrote.

Gov. Sarah Palin
“I told the Congress ‘thanks, but no thanks,’ on that Bridge to Nowhere.” — From Palin’s speech Wednesday.

Palen was talking about a $398-million bridge project that became the subject of national ridicule and a symbol of federal pork-barrel spending. It was to connect the city of Ketchikan (population 8,200) to Gravina, an island with just 50 residents.

In 2005, Congress backed away from language specifically directing the money to that particular bridge and left it up to Alaska to decide which transportation projects would get the money. Still, Palin supported the project when she ran for governor in 2006. The state took the money, but spent much of it on other projects before Palin pulled the plug on the bridge in 2007.

Keith Ashdown, a spokesman for Taxpayers for Common Sense, the government watchdog that first drew attention to the project, said Palin has “hyper-inflated her role” in killing the project.

In its analysis of the point Palin was making with this statement, the Associated Press added: “As mayor of Wasilla, Palin hired a lobbyist and traveled to Washington annually to support earmarks for the town totaling $27 million. In her two years as governor, Alaska has requested nearly $750 million in special federal spending, by far the largest per-capita request in the nation.”

Sen. Joe Lieberman
In the U.S. Senate, Barack Obama “has not reached across party lines to get anything significant done.” — From Lieberman’s speech Tuesday.

Obama has reached across the aisle to craft noteworthy bills. For instance, he teamed up with Republican Sen. Richard Lugar of Indiana on an initiative to lock down and secure both nuclear and conventional weapons worldwide, such as the shoulder-fired, anti-aircraft missiles that have been proliferating in recent years.

Obama also worked with Sen. Tom Coburn, an Oklahoma Republican, to write the Federal Funding Accountability and Transparency Act of 2006 which created a searchable database the public can use to look up details on federal grants and contracts. Obama and Coburn also got together on a bill to prohibit the Department of Homeland Security from issuing open-ended, no-bid contracts for emergency response activities after abuses were found in post-Katrina contracting.

Obama wants to roll back the Bush tax cuts on the upper-income brackets. So the claim is true if you are a family making more than $250,000 a year, or a single person making more than $200,000. Otherwise, it’s generally not the case. In fact, Obama advocates eliminating income taxes for seniors with incomes less than $50,000.

The payroll tax claim is a little different. Obama proposes a $1,000 tax credit on income for working families ($500 for singles), to offset payroll taxes. So for most people, Obama is actually lowering payroll taxes. But he has said he would raise payroll taxes on people making higher incomes of about $250,000 in order to keep Social Security solvent. Currently, only the first $97,500 of a person’s income is taxable.

Lieberman
Obama voted “to cut off funding for our American troops on the battlefield.” — From Lieberman’s speech Tuesday.

In May 2007, Obama voted against an appropriations bill that included funding for military operations in Iraq and Afghanistan. The bill did not include a requirement that President Bush begin to bring the troops home from Iraq, which is why Obama voted against it.

“We must fund our troops,” Obama said at the time. “But we owe them something more. We owe them a clear, prudent plan to relieve them of the burden of policing someone else’s civil war.”

If that counts as a vote to cut off funding for the troops, then Lieberman himself and almost every Republican in the Senate also voted to cut off the funding in April that year when they voted against a different appropriations bill. It would have funded operations in Iraq and Afghanistan, but it required Bush to begin withdrawing troops from Iraq, something Lieberman and the Republicans opposed.

In a very narrow sense, all of those votes were against military funding — a portion of which goes to equip and pay the troops. So there is a grain of truth to Lieberman’s attack. But it is misleading.

Palin
“That luxury jet was over the top. I put it on eBay.” — From Palin’s speech Wednesday.

Alaska’s jet plane was a major issue in the 2006 election, which Palin won. Then-incumbent Frank Murkowski had defied protests from members of the state Legislature and the public when he bought the jet in 2005 to travel around the state. His political opponents said the jet symbolized his arrogance and free-spending ways.

Palin defeated Murkowski in the Republican primary and then won the general election. She promised during the campaign to sell the jet, and one of her first orders on taking office was putting it on the market. The state listed it on eBay, asking $2.5-million. But it never got its asking price, and the jet eventually sold through an aircraft broker for $2.1 million.

Former Arkansas Gov. Mike Huckabee
Palin “got more votes running for mayor of Wasilla, Alaska, than Joe Biden got running for president of the United States.” — From Huckabee’s speech Wednesday.

MinnPost will do similar fact-check summary of statements coming from the Obama campaign. In the meantime, here’s a link to PolitiFact.com’s review fact-checking recent Obama statements.