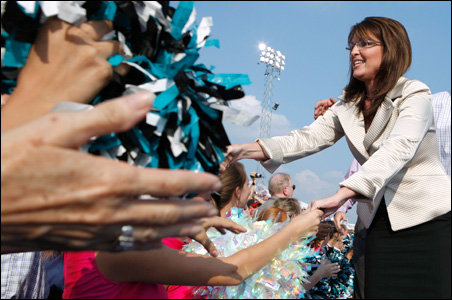 Plenty of handshakes for Sarah Palin as she campaigns Sunday in O’Fallon, Mo.

Before John McCain settled on Alaska Gov. Sarah Palin as his running mate, Pastor Gus Booth of Warroad, Minn., openly fretted about the possibility that the Arizona senator might select a pro-choice vice-presidential nominee.

“I would be highly disappointed” in a pro-choice selection, Booth said a couple of days before McCain picked pro-life Palin. “It would almost be political suicide.”

When McCain revealed his choice Friday, Booth and other members of the religious right rejoiced.

“It was just the most masterful VP choice in modern history,” Booth said Sunday after leaving Warroad Community Church, just seven miles south of the Canadian border, on his way to the Republican National Convention in St. Paul.

“Amazing,” he said. “I’m right in the thick of the right-wing, Republican, you know, evangelical Christian base. And everyone I’ve talked to is in love [with the selection of Palin].”

The sudden burst of affection for Palin, a first-term governor most voters had never heard of before last week has energized the conservative core of the GOP in a way John McCain never has. The 44-year-old first-ever female governor of Alaska, a self-described hockey mom, is enormously popular there (Rasmussen Reports says her approval rating is at 64 percent).

“About a week before [McCain] picked her, I told a few friends of mine, ‘You know, he’d be smart to pick a pro-life woman.’ And I was thinking of Kay Bailey Hutchinson,” Booth said. “I didn’t even know this Palin girl existed. And I am blown away, super excited, by this pick.”

The national surge in affection for Palin among Christian conservatives is typically credited by pundits to her support for teaching creationism in public schools, her recent decision to have a baby she and her husband knew to have Down syndrome, and a staunch pro-life stance.

The Anchorage Daily News wrote that “In 2002, when she was running for lieutenant governor, Palin sent an e-mail to the anti-abortion Alaska Right to Life Board saying she was as ‘pro-life as any candidate can be’ and has ‘adamantly supported our cause since I first understood, as a child, the atrocity of abortion.’ “

A sigh is just a sigh
Bishop Robert E. Smith of the Word of Outreach Christian Academy and Center of Little Rock, Ark., said he greeted the news of Palin’s selection with a sigh of relief.

“It was just a sigh of relief that he would even think about tapping her. It was very positive,” the convention delegate said.

“She’s the mother of five and very, very pro-life and pro-family,” he said when asked to explain his support of the relatively unknown Palin.

Pastor Ed Boston, of Hope, Ind., is in Minneapolis with his wife, Ann Boston, as a credentialed blogger of the GOP convention. He’ll be in the Xcel Energy Center observing and commenting on the proceedings using his “Cyber Pastor” handle for the Do the Right Thing website.

“It’s hard to tell where he stands because it’s just not something he chooses to be open with,” he said.

“We don’t always get our first or second or third choice in life,” Boston said. “We have what we have.”

Palin was also not his first, second or third choice.

“But since she has gotten the nod, I’ve seen an energy in the Republican Party that I’ve not seen in a long time — excitement — well, I’d probably say since 9-11.”

He’s more comfortable as a Christian with Palin than he is with McCain.

“The things with McCain we’re not sure about, with Palin, we’re sure about.”

He cited abortion as an example.

“We’re sure where she stands. She had a chance to get one when she had a kid with Down syndrome and didn’t [have an abortion].”

In April, Palin gave birth to a son, Trig, diagnosed with Down syndrome, a condition detected early in the governor’s pregnancy.

Dual roles
Palin’s motherhood earns her high praise from Booth, but it’s also the one area in which his footing becomes less sure as he traverses an argument supporting her nomination. When he’s asked if he harbors any concerns about the former beauty queen contestant, Booth says he would “hesitantly” mention one.

“I mean real hesitantly — you’ve got to know where I’m coming from; she’s amazing — but hesitantly, you know, she’s the mother of some young kids. And I think we in our nation have dis-enshrined motherhood. I think motherhood is commendable, if not the greatest, or one of the greatest, assets of our human existence. Nowadays when somebody says, ‘I’m a stay-at-home mom,’ they’re kind of looked down upon. I think we should enshrine them and say, ‘Praise God for you to take care of your kids.’ So she’ll have some unique challenges … not that she can’t do it.”

Said Booth, “She’s a great pick, you know, but being a mother is an even higher calling than being a vice president.”

Nevertheless, he firmly believes she’s up to the difficult juggling of roles required to be both a good mother and good leader.

“It seems like she’s got her head on straight and it seems like she probably would even agree with my statement that motherhood is a higher calling than vice president. They’re not mutually exclusive things. They can certainly be complementary if done right.”

Both Ann and Ed Boston agree Palin’s capable of fulfilling both roles.

“I don’t personally think she will have a problem at all,” Ann Boston said. “I don’t foresee her being a stick-’em-in-daycare-all-day mom. I really see her being the hand’s-on mom she’s always been. Before this baby came along, she had four other babies that she dealt with while running a city and then a state. So I really think she can do this. That’s what makes her even more greater.”

Boston and her husband have three children; they dropped the youngest off at college a few days ago. She’s thrilled to see a future with a female vice president figuring large in it.

“It’s just an awesome feeling to know that we’ve been equalized to the highest office in the country. It has finally happened for us. I know without a doubt that we’re going to win the presidency and so we’re really going to have a vice president that’s a female. Does that mean she’ll do a better job than a male? No. It just means that somebody is representing the fairer sex that I can relate to also. I can’t even really explain the excitement of that because we’ve never had it before.”

Michael Metzger can be reached at mmetzger [at] minnpost [dot] com.