Dan Butler is no longer surprised that people mistake his building for a hockey bubble.

“It’s a steel fortress,” he says. “We could hang 8,000 pounds every foot anywhere in the building.”

His building is the Circus Juventas Big Top, a one-of-kind youth circus performance school tucked in St. Paul’s Highland Park neighborhood. Butler and his wife, Betty, founded the school in 1994 and from the outset, their mission was clear. “From day one we were never going to focus on anything but the artistic side,” he said.

That meant no elephants or chimpanzees. The inspiration for the school came after the Butlers, who met at a circus school in Sarasota, first saw a performance of Cirque du Soleil.

“We were just captivated. It was just the most amazing thing; combining theater and circus.”

But the Butlers also had another goal in mind: to help kids like 15-year-old Katy Dill fit in.

‘The circus gave me so much confidence’
“I did gymnastics and I got kicked out of that ’cause of my ADD,” said Dill, who has been a student at Circus Juventas for the last eight years. “And so I came here and I didn’t like it at first. I kinda actually hated it. I was like, ‘I want to quit.’ But after some time I started to like love it. … the circus just gave me so much confidence and self-esteem from all the shows. It really helped. I like matured from it. So like when I come here I’m happy because I’m good at this. “

“The kids that come to Circus Juventas are not the quarterbacks of the football team,” said  Butler, “these are kids that don’t do sports and are not competitive in nature. “We take every kid here; they don’t have to try out. And our initial focus was that. We wanted to give back to the community. We have been called the youth Cirque du Soleil.” 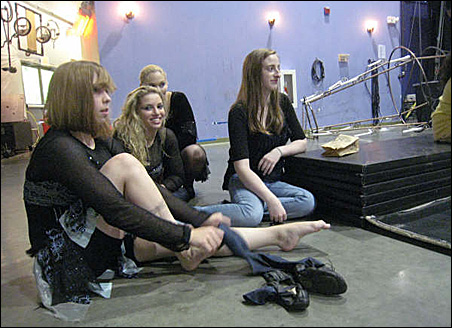 On Tuesday, nine performers from Cirque du Soleil — who are in town this week performing “Saltimbanco” at the Target Center — stopped by Circus Juventas to watch some advanced students perform and answer questions.

Feels like home
“It’s always great to come back under a tent,” said Michael Veilleux, road manager for “Saltimbanco,” as he looked up at a web of steel trusses. “The feeling here is very much like that at home.” The company works out of a similar facility in Montreal, and last year restaged “Saltimbanco” so it would fit inside arenas instead of the company’s trademark tent.

“We had to cut one act, a high-wire act, because it was too timely to set up,” said Veilleux. “We replaced it with a bicycle act, and it’s like it’s been part of the show all along.” (The show first started touring in 1992.)

Inside Circus Juventas, the concrete floor in the center of the Big Top is covered with dozens of well-worn black rubber mats. Above them a series of ropes and large hoops hang from a labyrinth of catwalks and high wires, and Veilleux watches as the students use the space to perform aerial and tumbling acts for the circus stars.

“I was so nervous,” said 16-year-old Morgan Taylor. ” ‘Oh my God if I mess up they’re going to know.’ I was way more nervous than I’ve ever been for any other performance.”

Veterans were appreciative
But the veterans were more than kind to the students, bursting into applause again and again while they performed.

“You guys did a great job today,” said “Saltimbanco” Head Coach Michael Ocampo. He encouraged them to take advantage of the opportunity to work on professional equipment under coaches who, much like those at Cirque du Soleil, are from all parts of the world. Others artists in the Cirque group gave the students more performance tips: smile, connect with your audience, and remember to stay in character.

“This is the most amazing thing,” Dan Butler said afterward. “Our young people get to connect with these performers and there’s really no difference. They all have the same aspirations, the same challenges, the same setbacks, and the only difference is these guys are a little older and they’re already professionals.”

Try and try again
Morgan Taylor, 16, who’s been with Circus Juventas for five years, spends a lot of time working on aerial acts. After listening to the pros, she said she realized that running away with the circus is a bit more complicated than she first thought.

“I thought Cirque du Soleil auditions were going to be like, you couldn’t audition unless they asked you, and here I see it’s like you can actually go and try and it’s not like a one-hour thing. It’s actually like an all-day huge trial event, which I didn’t realize at all,” she said.

And Katy Dill, who trains as a tumbler and contortionist, learned another valuable lesson: Success doesn’t come easy.

“People who were in Cirque du Soleil, some of them had to like try hard and like it took them a few years to get in and they didn’t get it right away and they kept trying — so it kind of helps, that advice. Makes me keep trying, pushing myself,” she said.

“For our kids to get a chance to interact and talk to someone like that,” said Butler, “and they can see, ‘hey I had to audition three times,’ or ‘I had an audition and I didn’t hear back from them for three years.’ So the message is, just never give up.”