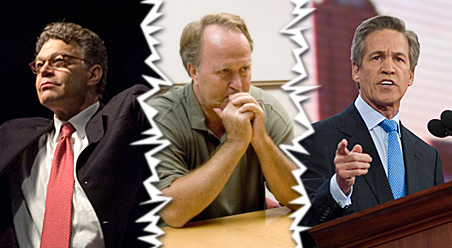 Given the turmoil of Wall Street, political ads featuring talking fish and blue-collar bowlers may seem out of touch with the financial concerns of Minnesota voters.

But despite the economic uncertainty that’s having an impact on everyday Minnesotans and is showing up as voters’ top concern, it appears unlikely the tone of Minnesota’s Senate race suddenly will reflect the seriousness of the times.

The campaign of Democratic challenger Al Franken will continue to use such devices as a talking fish to show who Republican incumbent Norm Coleman hangs out with. And Coleman’s campaign likely will continue to have commercials with guy-next-door bowlers talking about how Coleman “gets things done” — and ads that show what a nasty-tempered fellow Franken can be.

This Coleman-Franken finger-pointing may leave a crack open for Independence Party candidate Dean Barkley to continue to gain support in the state.

University of Minnesota political science professor Larry Jacobs agrees that in the last few days the mood of voters likely has become very serious. He compares the Wall Street “meltdown” to the economic version of “a terrorist attack.”

“The general area of the economy is a big advantage for Democrats,” Jacobs said.

Still, he doesn’t expect either Coleman or Franken to suddenly start trying to come up with serious, economic policy ads.

“The key thing to remember is that only about 15 percent of the voters are up for grabs,” Jacobs said. “The rest of us have already made up our minds. The 15 percent left tend to be the least well-informed.”

He predicts that because the economy is traditionally an area that favors Democrats, Coleman will continue to try to direct the campaign toward Franken’s perceived weaknesses.

“The (Angry Al) ads are an effort to prepare a landscape that Franken is not up to the job,” said Jacobs. “The Coleman campaign can’t raise the question, ‘Are you better off now than you were six years ago?’ …The tax stuff — his history as a satirist — has really hurt Franken. So Coleman will be trying to make the point that Franken does not represent Main Street Minnesota values.”

Franken, according to Jacobs, will have to respond to Coleman, “but his best shot is to keep the focus on how bad things are.”

Not surprisingly, the campaigns defend their strategies.

From the outset, said spokeswoman Colleen Murray, the Franken campaign “has been focused on the fact that the economy is not working for the middle class.”  Franken, she said, has proposed such things as tuition tax credits and protection of Social Security throughout the campaign?

So what does a talking fish have to do with enlightening voters?

Coleman’s “record” of supporting such big industries as oil and pharmaceutical companies show he’s “out of touch” with the middle class, she said.

When asked about the tone of the race, the Coleman campaign ignored the question. Instead, it responded with a statement from spokesman Mark Drake that sounded like a mish-mash of most of the Coleman commercials:

“Americans are looking for leadership that can work across party lines to get things done,” Drake said in the statement. “Norm’s formula for reawakening economic vitality in St. Paul was to bring people together to get things done, to restore hope and confidence and to ultimately create a climate of investment and engagement. That’s how you deal with tough economic times. You don’t throw the partisan gas on the fire that Al Franken carries around in his partisan gas can to fuel flames of division, anger and distrust. Norm’s history of working with people he may not always agree with, but always respects, and getting things done, is exactly the key difference between him and Al Franken.”

Hey, all you can do is ask the question.

“It’s not just the things that Al Franken makes up that we are going to challenge him and his allies on,” said Doug Kelley, a Truth Squadder. “We’re also going to hold him accountable for his publicly proven ethics and legal problems.”

Barkley could benefit from Franken-Coleman sparring
The potential beneficiary of all this could turn out to be Barkley, predicted Jacobs. Clearly, he’s in a position to hold himself above the fray.

The problem for Barkley, of course, is that he doesn’t yet have the money to buy radio and television ads, though Goldman said that weekend polls inspired a surge of financial support. (KSTP and Star Tribune weekend polls show Barkley receiving voter support of 14 percent and 13 percent, respectively.)

While Barkley waits for enough money to make advertising buys, he’s releasing statements belittling the campaigns of Franken and Coleman.

So on it goes. In an exceedingly close race, neither Coleman nor Franken dares let go of the other guy’s throat. Barkley shakes his head in contempt.

Jacobs says there are a couple of things to watch in the final weeks of this campaign:

1. Will Barkley take more votes from Coleman or Franken? At this point, he says, Coleman may be the more vulnerable.

2. Will the Senate debates be what finally decide the outcome?

Aside: Campaign managers met Monday night to discuss the debates. The meeting was described as “productive” by the Barkley and Coleman campaigns. An announcement of when — and how many — debates there will be is expected yet this week.

But, if only 15 percent of the least informed, least interested voters, are in play, why will the debates matter?  After all, it would make sense that these voters are the least likely to pay attention to debates.

“Media coverage of these events does filter out,” said Jacobs.

Only the tones of the campaigns remain the same.

Coleman and Franken on Iraq: Everything you need to know
By Eric Black
8/7/2008