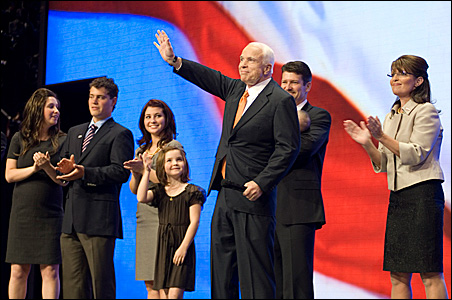 The man of the week may be 72, but that hasn’t kept young adults from crashing his party.

Sen. John McCain’s young supporters may not rival Sen. Obama’s in numbers or noise, but they do exist, and they’re in plain view here during the Republican National Convention, actively participating in many roles.

Renee Zeman, 20, has been working for the RNC host committee all summer. The College of St. Catherine junior had a morning class Wednesday and then helped to coordinate a nighttime party honoring the host committee.

Zeman said she’s proud to cast her first presidential vote for McCain, even though she’s outnumbered by Obama supporters on campus. “We are definitely the minority, and we definitely have to fight and explain ourselves more, but that’s what gives me and the small group of College Republicans that we have on campus the energy and the steam we need to go out and voice our opinions and defend our rights.”

Jake Grassel, 27, a third-year law student from Eden Prairie, also feels his support of McCain has placed him on the less-traveled road. “I wish more people my age would come to McCain, because I think he’s the best candidate for our future, but I’ve stayed strong,” said Grassel, who attended events for South Dakota and Minnesota delegates Wednesday night.

Attempts to sway his colleagues and friends haven’t been hugely successful. “It’s tough, because it’s like changing the music in their iPods,” Grassel said. “You need the next big hit to come along – and maybe Sarah Palin is the next Billboard No. 1.”

Celebrity suspicion
Many of the younger GOP convention-goers see Obama as a celebrity they’re suspicious – and maybe resentful – of.

“I just don’t feel that Obama knows exactly what he’s getting into,” Zeman said. “I think he might be going after the glamour of the position, versus helping the United States along.”

There’s an audible disdain when some young convention attendees describe their Obama-loving peers, a sense that they’re groupies, high on stardom, low on facts.

“A lot of Obama’s young supporters would vote for whoever’s the hottest guy at the time,” Grassel said. “Kanye West or Ben Affleck, you bring one of them in, and they might support him. And we’ve seen this before in Minnesota, when Jesse Ventura ran. This guy comes in, he excites them, he’s a professional wrestler, he can drink beer with them at the U of M, and he’s cool, but at the end of the day, when you put a celebrity in office, that’s what you get: You get a celebrity in office.”

“I’ve made a decision to accept the substance over the style and not get caught up in the hype,” Grassel added. “I think a lot of college students and young people, unfortunately, don’t really consider the long-term aspects of their decisions. Their attraction to Obama is only skin deep.”
Daniel Reiff, 30, an attorney from Arden Hills who chairs the Minnesota Young Republicans, recounts a similar experience. “When I speak to Obama supporters, what I hear from a lot of them is that they really don’t know anything about him; they just know he’s for change. And frankly, that’s a terrible reason to vote for someone.”

In general, get-out-the-vote movements irk Reiff, who’s attending a number of Xcel speeches this week. “You hear, ‘Let’s get the vote out. People, you need to vote.’ What I don’t hear is, ‘People, you have to be educated about the candidates.’ “

If that were the case, Reiff thinks more young people would cast their votes for McCain.

The overriding issue that attracts Reiff to McCain is national security. “The foremost function of your government is to protect you,” he said.

Grassel, meanwhile, said he appreciates McCain’s experience. “I feel like with him we would have a strong and steady leader in the White House to give us a peace of mind.”
Zeman has reached a comparable conclusion. “I feel like, overall, he’s the best qualified. Here we have a man who has supported our country, fought for our country, was tortured for our country. He has the leadership experience.”

Attraction to the maverick
Although Obama’s fresh perspective and idealism may strike a chord with young adults, so does McCain’s intellectual independence, Grassel said. “McCain’s completely his own man. He’s differed with Bush on a number of things. He’s definitely a maverick, as we saw last Friday,” when he made the surprising announcement that Alaska Gov. Sarah Palin would be his vice-presidential candidate.

Grassel thinks McCain has guts, as demonstrated by his support of the unpopular military surge. “He put his entire career on the line to achieve victory in Iraq. At the time, it hurt him, and it hurt him bad, but he was proved right in the end.”

The idea of a maverick appeals to young people. So does the self-sufficiency some associate with less government intervention.

“I think many of [the young people] are here because they believe in individual liberty, rather than it’s the gov’s job to tell you what to do,” Reiff said. “I think a lot of them want to take care of themselves and be responsible for themselves.”

Despite opponent’s fervent young supporters, McCain can claim his own youth vote