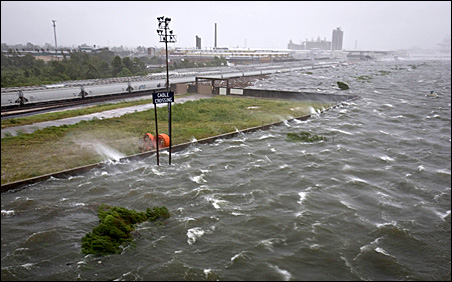 As their party gathers in the Twin Cities this week, Republicans carry the confidence that they – better than their opponents – know how to win presidential elections.

Even with a Gulf Coast hurricane blowing their convention plans off course, the GOP has the opportunity to turn disaster to advantage by mustering a strong and compassionate response. “It’s time to take off our Republican hats and put on our American hats,” Sen. John McCain said after hustling to tour storm preparations in Mississippi on Sunday.

Hurricane Gustav provides the party a dramatic backdrop for drawing sharp contrasts between McCain’s abilities and President Bush’s perceived incompetence in facing Katrina three years ago. Transforming negative to positive has been a hallmark of Republican media talent in recent years and is one reason for the party’s presidential dominance in recent decades.

Of the 15 presidential contests in the postwar era, Democrats have managed to win only six. Three of those victories – in 1948, 1960 and 1976 – came by razor-thin margins, and all came, arguably, in extraordinary circumstances. John Kennedy’s 1960 campaign was the first to recognize the power of image and television, for example. Lyndon Johnson’s and Jimmy Carter’s wins came in the aftermath of tragedy and scandal.

The Republican Party is the default party of the modern American presidency.

Shift required for GOP loss
For the John McCain-Sarah Palin ticket to lose in November would require an exceptional shift of some sort – perhaps in the demographic appeal of the candidates, or in the economic condition of the country, or in the perceived failure of the incumbent.

Each of those factors may come into play this time. Public opinion polls give the Democratic ticket an edge at this point, both in the popular vote and in the state-by-state electoral counting. Gallup’s daily tracking shows Barack Obama ahead 48 to 42 percent. RealClear Politics has Obama leading 228 to 185 in electoral votes with 125 votes up for grabs and 270 needed to win.

But the Republicans are just today launching their big event. Unless Hurricane Gustav blows them into media oblivion and rescue efforts are botched again, the incumbent party will have a chance to work its magic and set course for another victory.

Possible reasons for presidential successes
So, why have the Republicans been better at winning presidential elections? Here are four possibilities:

• By its character and history, the United States is a fundamentally conservative country and wants to reflect that personality in its president. That’s the proposition posed in John Micklethwaite’s and Adrian Wooldridge’s book “The Right Nation: Conservative Power in America” (2004).

The British-born authors have the advantage of viewing America with a degree of detachment that allows them to see what natives often miss. They point out that “from the very beginning, elements in American society – religiosity, capitalism and even geography – have put a brake on any drift to the left.”

Even the founding rebellion against the British crown was less about fundamental human rights (that was the French Revolution) than about commercial power; the colonists simply didn’t want to pay taxes that they considered unfair. The commercial interest of the individual has been America’s driving force ever since. The country has scorned centralized regulation, tolerated exceptional inequality and kept at bay the labor parties and social-democracy models that characterize Western Europe and Japan. To suggest, as some Republicans do, that America is a welfare state is ludicrous by the world’s standards.

Frontier myth’s importance
• The mythical importance of the frontier has played into the GOP’s cultural and geographic appeal. Over the last half-century, nearly all of the nation’s growth has come in the suburbs of the South and West – a naturally conservative stronghold. Americans have long equated open space – or the illusion of it – to personal freedom. Even their love of big off-road-type vehicles, if only to drive to the mall, recalls the conquest of the frontier and perpetuates the myth of self-reliance. Thus, the unique importance attached to gun ownership, as well as other values emblematic of the frontier mentality (patriotism, religiosity, an exploitative attitude to land, etc.) have become associated with the Republican brand.

Palin’s reputed love of hunting and oil drilling may, indeed, solidify the GOP ticket’s appeal in shaky western states like Montana, New Mexico and Colorado. And her church-going social conservatism may turn out much-needed Christian Right voters in important border states like Missouri, North Carolina and Virginia. Tilting the Electoral College further toward the advantage it already gives to smaller, non-urban states has been an important part of Republican presidential success. (See “The Big Sort: Why the Clustering of Like-Minded America is Tearing Us Apart” by Bill Bishop, 2008, and Divided America: The Ferocious Power Struggle in American Politics” by Earl Black and Merle Black, 2007.)

• The commander-in-chief role is better suited to the Republican brand. The party’s emphasis on straightforward patriotism, military power and a willingness to “go it alone” on the international stage if necessary helps define the American impression of what’s needed in a leader. Polls continue to find that although Americans trust Democrats to solve domestic problems, they see Republicans more capable on foreign affairs. Even considering the unpopular war in Iraq, the public prefers Republican leadership on national-security issues.

One of the intriguing side stories of this election season has been the suggestion by Russian Prime Minister Vladimir Putin that the U.S. helped orchestrate
the Georgia-Russia conflict to provide competitive advantage for McCain. Commentators dismissed the charge as classic Russian paranoia. But it’s probably true that stirrings toward a renewal of the Cold War helps a Republican candidate. The conservative’s “need” for an external enemy has been a mainstay of American politics.

Republicans are skilled at using media
• Republicans have been better at using modern media – particularly the TV commercial, the 24-hour news cycle and talk radio – to frame political issues, negatively define their opponents and target the voters they need.

Hurricane Gustav’s destructive arrival in Louisiana today may stretch the party’s marketing talent to its absolute limit. But attacking your opponent’s strength (Obama as celebrity, for example) or ignoring the irony of your own weakness (McCain-Palin as the true reformers and agents of change) has become a Republican hallmark.

“Rather than run away from the hurricane and its political risks, Mr. McCain ran toward it,” Peter Baker wrote in today’s New York Times.

“In some ways, it was a nightmare moment for Republicans. The hurricane’s approach put front and center once more some of the worst failings of the Bush presidency at the very moment Mr. McCain was to begin presenting a vision of the post-Bush Republican Party to the nation,” the Times said.

“With television tracking the storm’s approach [and arrival] and showing images of an emptying New Orleans, it was hard for voters to escape reminders of how Mr. Bush had emerged from Katrina severely wounded by judgments of incompetence and lack of empathy.”

Strategists seek to turn storm to advantage
But turning the storm from political liability to advantage is not only possible but probable, according to Washington Post blogger Chris Cillizza. He reported on Sunday that party strategists were looking for ways to turn the storm to their advantage.

“McCain could look more presidential and decisive touring the region hardest hit by Gustav than hobnobbing with delegates and GOP officials in Minnesota,” the Post blogger wrote. “And because President Bush and Vice President Cheney have cancelled their appearances at the convention, the McCain camp won’t be in the awkward position of having to embrace Republican leaders whose approval ratings are remarkably low.”

“As long as we properly handle the Gustavization of this convention it may be a positive,” one operative told the Post. “If McCain looks presidential – meaning not partisan – over the next few days, voter perception of him could be altered significantly,” the Post blog continued.

The biggest downside, it said, comes if TV shows suffering on the Gulf Coast and celebrating in the Twin Cities. That’s why the party is moving to change many galas into fundraisers for relief efforts and why delegates must be careful not to be seen having a good time.

The Christian Science Monitor’s Linda Feldmann summarized it this way: “Forget the funny hats, glitzy parties and rousing, partisan speeches. The sober business of Hurricane Gustav – though making landfall 1,200 miles away from the Twin Cities – has sent the 2008 Republican National Convention into uncharted territory.”

Election magic: Transforming negative to positive has been a GOP hallmark