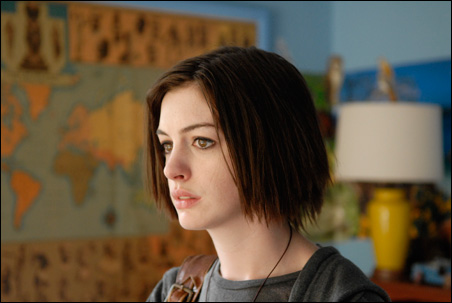 By the time I finally caught up with “The Wrestler” on the final day of the Toronto International Film Festival (aka TIFF), the movie’s longhaired, bulked-up, increasingly bizarre lead actor, Mickey Rourke — in town earlier in the week to tout his slammin’ comeback — had already jumped out of the ring. But by that point, the 10-day fest, as a star-studded preview of coming attractions, had done its job.

Or more than its job, arguably. A gung-ho young programmer, addressing a juiced, rowdy crowd at 9 a.m. (on the same stage where Diablo Cody last year stumped for a little movie called “Juno”), didn’t just introduce “The Wrestler” (opening here before year’s end), but sold it strenuously to the audience as “like five double shots of espresso” and as a movie that was “bought by Fox Searchlight for $4 million.”

Um, since when does a festival curator deliver sales figures from the stage?

In an apocalyptically bad economy, movies, miraculously or not, are still selling — or at least movies with ex-Hollywood stars playing half-dead wrestlers who, with the help of a Good Woman, get one more shot at glory. (Yo, Adrian!) Still, even a guaranteed box-office smackdown like this one needs all the help it can get — which is where the announcement of dollar amounts becomes a kind of rave review.

Thanks to the TIFF, where I saw more than two dozen new movies in a week, the chronological list below contains a tad more critical comment than one generally finds in fall film previews. But take that comment with a grain of salt. I mean, just because the critic doesn’t believe a word of the allegedly fact-based “Nothing But the Truth” (due in December), in which Kate Beckinsale plays a version of jailed reporter Judith Miller (and Vera Farmiga impersonates Valerie Plame) doesn’t necessarily mean you won’t. After all, as a Toronto programmer might say, the movie cost a fortune!

“Trouble the Water”
The year’s best documentary — as I first reported at MinnPost from Sundance  — follows the ultra-resilient filmmaker and rapper Kimberly Rivers Roberts in the weeks after Hurricane Katrina. Three words: Don’t miss it.
When: Starts Friday, Sept. 19
Where: Lagoon Cinema, 1320 Lagoon Ave., Minneapolis; 612-825-6006.

“Glass: A Portrait of Philip in 12 Parts”
Composer Philip Glass is celebrated in this documentary by Scott Hicks, director of “Shine.”
When: Friday and Saturday screenings begin at 7:30 p.m., Saturday and Sunday screenings at 2 p.m.
Friday, Sept. 19 through Sunday, Sept. 21
Where: Walker Art Center, 1750 Hennepin Ave., Minneapolis; 612.375.7600.

“Twin Cities Black Film Festival”
New films by and about African Americans screen at Augsburg College in the sixth annual edition of this three-day fest.
When: Through September 20
Where: Augsburg College, Sateren Auditorium, 2211 Riverside Ave., Mpls.; 612-330-1000

“A Soul Cinema Tribute to Isaac Hayes”
Oak Street pays its respects to the late R&B/soul legend with a three-film series that includes “Truck Turner” (starring Hayes), “Shaft” (scored by Hayes), and “Wattstax” (with a live performance by Hayes).
When: Friday, Sept. 19, through Thursday, Sept. 25
Where: Oak Street Cinema, 309 Oak St., Minneapolis; 612-331-3134.

“Dawning”
Director Gregg Holtgrewe (“Waiting All Day for the Green Face of the Hummingbird (If I Were a Lily)”) presents the premiere of his latest feature, a tense drama about a family’s weekend trip in Northern Minnesota. The free screening begins at 9:30 p.m.
When: Wednesday, Sept. 24
Where: Riverview Theater, 3800 42nd Ave. S., Mpls.; 612-729-7369.
Information here.

“Miracle at St. Anna”
Set in 1944 (and running nearly three hours), Spike Lee’s epic of African-American soldiers fighting the Good War in Italy strikes me as a disappointment of crushing proportions, but no man’s army could have kept us from seeing it, so by all means judge for yourself.
When: Starts Friday, Sept. 26
Where: area theaters

“Orgasmic Birth”
Producer Debra Pascali-Bonaro introduces a screening of her documentary about the “intimate nature of birth.”
When: Thursday, Sept. 25; screening at 7 p.m.
Where: Riverview Theater, 3800 42nd Ave. S., Minneapolis; 612-729-7369.

“Manhattan Short Film Festival”
The short films of a dozen finalists from around the world are screened and judged by the audience, with winners announced the following day.
When: Saturday, Sept. 27, at 7 p.m.
Where: Oak Street Cinema, 309 Oak St., Minneapolis; 612-331-3134.

“Chicago 10”
Director Brett Morgen’s part-animated re-creation of the 1968 police crackdown at the DNC — and ensuing trial — is a total mess, but the Walker’s one-night-only screening is plenty worthy nonetheless for being followed by a Q&A with Morgen and Twin Cities-based documentarian extraordinaire Matt Ehling (“Urban Warrior”).
When: Thursday, Oct. 2, at 7 p.m.
Where: Walker Art Center, 1750 Hennepin Ave., Mpls.; 612.375.7600.

“Spirit of the Marathon”
The Riverview’s screening of this documentary about the famed 26.2-mile running event is presented at 3 p.m. in conjunction with the Twin Cities Marathon.
When: Saturday, Oct. 4
Where: Riverview Theater, 3800 42nd Ave. S., Minneapolis; 612-729-7369.

“Jean-Luc Godard: 1960s Retrospect”
Well, if the once-great cinephilic temple known as Oak Street Cinema must indeed meet the wrecking ball before year’s end, let it go out with a bang via the ’60s masterpieces of Jean-Luc Godard, whose intellectual disaster-movie “Weekend” from ’67 famously expires on the words, “End of cinema.”
When: Friday, Oct. 10, through Thursday, Oct. 23
Where: Oak Street Cinema, 309 Oak St., Minneapolis; 612-331-3134.

“Cinema Lounge”
On the third Wednesday of each month (at 7 p.m.), including Oct. 15, IFP Minnesota presents a collection of shorts by Minnesota-based film- and video-makers, many of whom are in attendance to introduce the work and answer questions afterward. Additionally, a 20-year anniversary program will be held Oct. 23 (7 p.m.) at the Minnesota History Center.
Where: Bryant-Lake Bowl, 810 W. Lake St., Minneapolis; 612-825-8949.
Minnesota History Center, 345 Kellogg Blvd. W., St. Paul; 651-259-3000.
Information

“Rachel Getting Married”
Directed by a heroically rebounding Jonathan Demme (remember “Something Wild”?), my favorite big Toronto movie takes horribly clichéd subject matter — a wedding forces estranged family members to confront their myriad issues — and, even with handheld DV camerawork a la late-’90s Lars von Trier (another cliché), transforms it into an alternately shattering and exhilarating experience. After only a single viewing (I’ve promised myself at least two or three more before the year is out), I still haven’t figured how Demme does it. Certainly it doesn’t hurt that, in the role of the bride’s train wreck of a younger sister, he has chameleonic Anne Hathaway, whose emotional high-wire act is the stuff that Oscars are made of.
When: Starts Friday, Oct. 17
Where: Uptown Theatre, 2906 Hennepin Ave. S., Minneapolis; 612-825-6006.

“W.”
Director Oliver Stone on the 43rd president of the United States (played by Josh Brolin). Alas, we haven’t seen it (isn’t Stone still shooting the thing?), but, aside from Nov. 4, Oct. 17 is the most important date on our calendar.
When: Starts Friday, Oct. 17
Where: area theaters

“Changeling”
Director Clint Eastwood continues his autumnal winning streak with this ultra-dark, fact-based social critique of the exploitation of women and children in late-’20s Los Angeles. Oh, yeah — Angelina Jolie is in it.
When: Starts Friday, Oct. 31
Where: area theaters

“Synecdoche, New York”
Screenwriter Charlie Kaufman (“Being John Malkovich”) makes his debut behind the camera with this fabulously bizarre, borderline inscrutable tale of a terminally ill theater director. Imagine a comedy written and directed by a brain tumor and you’re … still not getting it.
When: Starts Friday, Nov. 7
Where: Uptown Theatre, 2906 Hennepin Ave. S., Minneapolis; 612.825.6006.

“JCVD”
The Muscles from Brussels — Jean-Claude Van Damme — is back and more brilliant than ever! Can you believe it?
When: Starts Friday, Nov. 7
Where: area theaters

“Quantum of Solace”
Aka “B22” – or #2 with Daniel Craig as 007. We’ll see it gladly even with its direction by the woeful Marc Forster (“Finding Neverland”).
When: Starts Friday, Nov. 14
Where: area theaters

“A Christmas Tale”
In Toronto, writer-director Arnaud Desplechin (“My Sex Life … or How I Got Into an Argument”) told me in an interview that, indeed, his sprawling tale of severely damaged French family members reluctantly reuniting at the holidays is designed to make us feel less freakish about having imperfect families of our own. Happy holidays!
When: Starts Friday, Nov. 21
Where: Edina Cinema,
3911 W. 50th St., Edina; 651-649-4416.